The Molly Brown House Museum is home to many beautiful pieces of history that display a picture of life for the Brown family in the late 1800s. One original and extraordinary piece in the home are the stained glass windows on the north façade. While we are unsure of the exact original installation date of the windows, we do know that they can be seen in historic photographs from 1910. 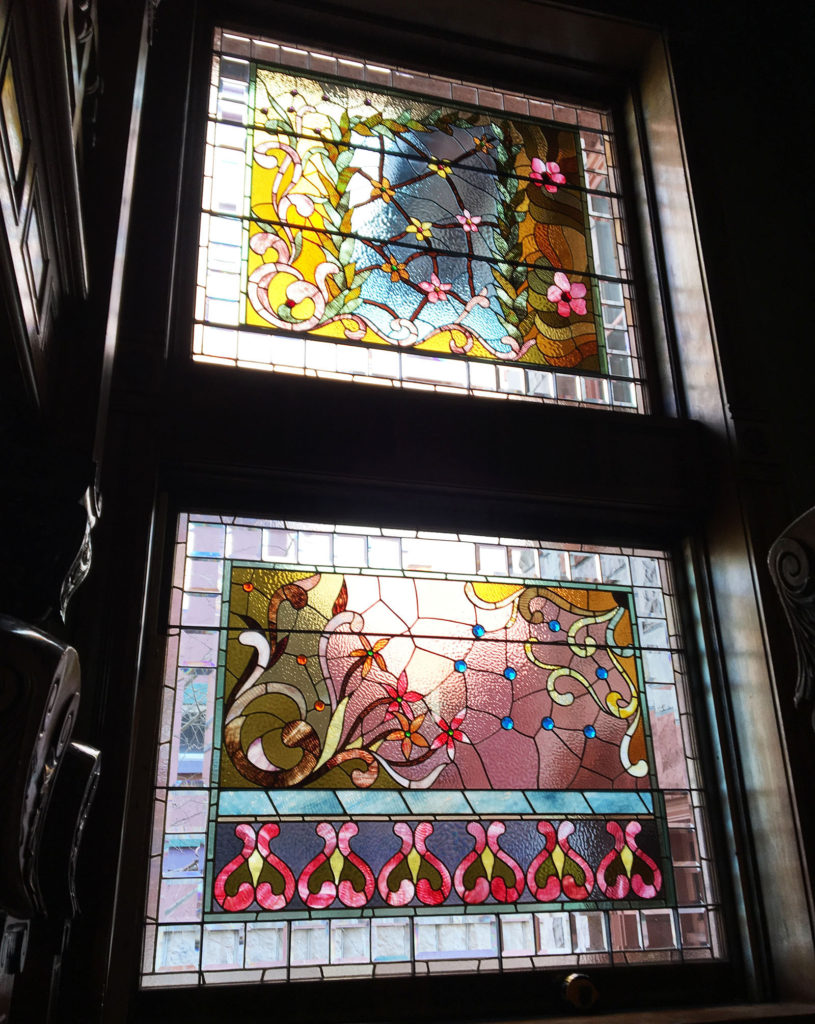 Stained glass, prior to restoration

Watkins Stained Glass, a family company that has been crafting stained glass since 1761, is believed to have manufactured the stained glass on the north façade of the Molly Brown House. In 1868, the Watkins family began business in Denver and completed most of the window work for architect William Lang, who built the Molly Brown House in 1889. In Denver, four generations of Watkins men have devoted their lives to stained glass since the arrival of Clarence “Charles” Watkins who traveled to America via ship with his toolbox in hand and the skills he had learned. Before moving to Denver, Clarence worked for the finest stained glass studios in New York, Boston and St. Louis. As he continued Westward in 1868, he left St. Joseph, Missouri in a covered wagon loaded with stained glass, supplies and tools and headed for Denver Colorado. Clarence Watkins grew his business in Denver creating spectacular stained glass for churches, mansions, and businesses and became very respected in the community. One of Clarence’s most famous pieces in Denver is at the Brown Palace, where he designed and fabricated the beautiful stained glass skylight. 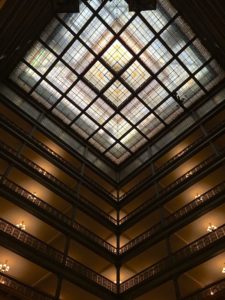 The skylight at the Brown Palace Hotel. Image courtesy of Anne Ruthmann, http://anneruthmann.com

Clarence’s son, Frank, followed in his father’s footsteps and began his stained glass apprenticeship in Denver in 1902. Frank had worked on stained glass pieces that can be seen in homes and bungalows built during the 1920s. He also spent much of his time working on windows for scores of churches and became well acquainted with the clergy in Denver. Frank did really well in his business until the Great Depression during the 1930s. During that period of time, Frank continued to help struggling churches by repairing their stained glass windows at no cost.

Frank’s son, Phil, was the next Watkins to take over the stained glass business. During his time, he was briefly interrupted during World War II due to the unavailability of lead. After the war, Phil opened his own studio in Englewood in 1957, when stained glass became popular again. Phil continued to work for 35 years and produced several thousand stained glass works of art in Denver.

Currently, Phil Jr. is the latest member to carry on the Watkins Stained Glass tradition. He has been the owner of Watkins Stained Glass since 1985. While he grew up in the studio with his father and made his first windows unaided at the age of 12, Phil Jr. completed an official 5-year stained glass apprenticeship and learned every aspect of the business. Phil Jr. is one of the few artists in the country who can do every aspect of stained glass: creating the design, sketching, measuring, patterning, cutting the glass, painting, glazing, and finally, installing the windows. In addition, he also specializes in antique stained glass restoration. In 2018, Phil Jr. restored the stained glass windows on the north façade of the Molly Brown House Museum.

Although no documented evidence has been found, Phil Jr. and Jane Watkins, who are the current business owners of Watkins Stained Glass, have always been told that Watkins Stained Glass manufactured the original stained glass windows on the landing on the north façade of the Molly Brown House. After inspecting the windows closely, Phil is very certain that these windows were his family’s work. Phil believes the craftsmanship and details, such as the efficient soldering technique and the types and colors of glass, appear to be the work of his great grandfather, Clarence “Charles” Watkins.

To view the stained glass works completed by Watkins Stained Glass, check out their website at http://watkinsstainedglass.com