Picture this: you are an archeologist exploring an ancient tomb in Egypt. You are navigating dark tunnels painted with inscriptions of Gods and the afterlife, until suddenly, you find yourself in the heart of the pyramid itself. The tomb of a long-forgotten elite of the Egyptian world. How do you know that you have found your way into the tomb? You are currently surrounded by 400 small statues of mummified humans, equipped with tools to farm, cook, and serve. These small figurines are called Ushabti (or Shabti/Shawabti) and played a great significance in the rituals of burying weather nobles or royalty through the great Egyptian dynasties. But how is this burial figurine from Egypt tied to the Titanic? And to our own Margaret Brown? Perhaps exploring the history of this item will help us to better understand the connection between these two seemingly unrelated events from history!

In the Egyptian Book of the Dead, it is stated that the dead would receive land for their nourishment from the sun god, Ra. Not wanting to work (in life and in death) the rich and famous of Egypt created a plan to bring servants into the afterlife with them. This practice started in the First Period with Shabtis, figurines wrapped in cloth and placed into small coffins alongside the dead. The type of Shabti ranged from brewers to masons to farmers! 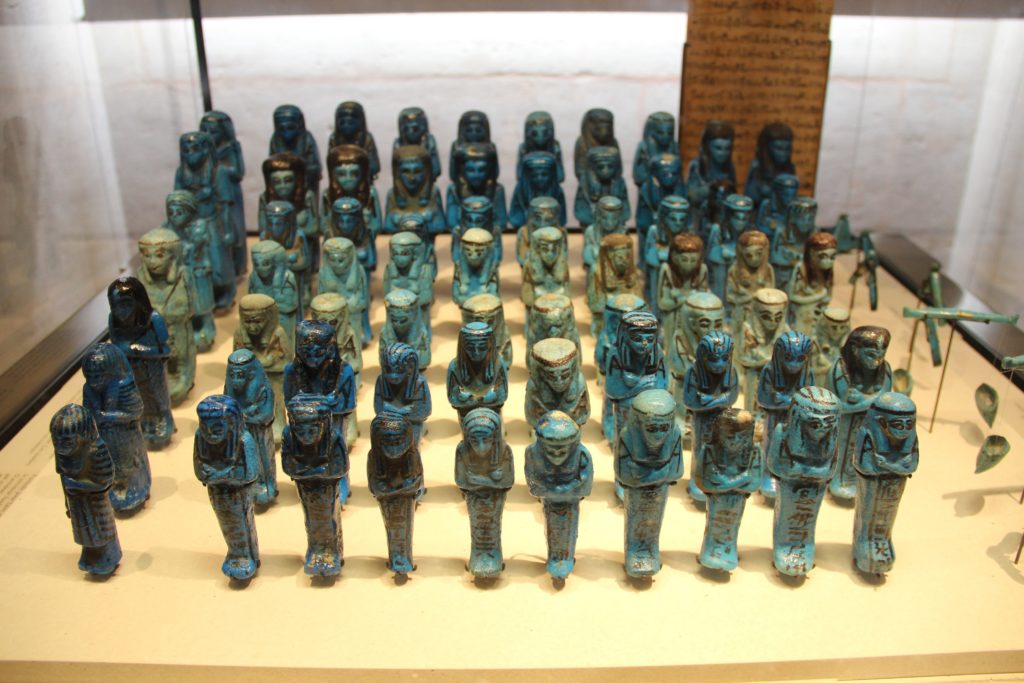 This practice developed over the years; Shabti became Shawabti by the Seventeenth Dynasty. By this point, the blessed dead were being buried with up to 40 Shawabti. They had also changed in appearance and were now inscribed with spells from the Book of the Dead (or the Coffin Yext). By the twenty-first century, these ceremonial statues had evolved into a mass-production machine. Ushabtis, as they began to be called, were being made out of many different types of materials: wood, stone, faience, wax, clay, terracotta, glass, and bronze. Why were they mass-produced and made out of so many different materials? The demand was high! The noble dead were being buried with 401 Ushabti! That number is specific for a reason; 365 workers represented each day of the Egyptian calendar, and 36 overseers to “manage” the workers. 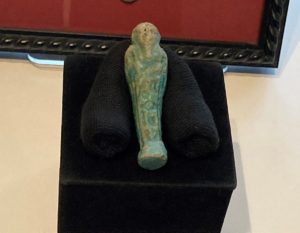 So, how did one of these afterlife servants end up on the Titanic? Margaret Brown, of course! While we aren’t entirely sure how she came into possession of this ancient relic, we do know it was significant to her. During all the chaos that ensued once the ship struck the iceberg, Ms. Brown chose to bring her Ushabti with her onto the deck above. When she was put into the lifeboat and dropped into the sea below, the Ushabti went with her.

We can only speculate what her intention was for bringing the ushabti with her, but maybe she thought it would be comforting to bring along a companion that was created to travel to the afterlife alongside its owner? If she headed out of her room prepared to face death, it could’ve brought her some comfort to have her Ushabti by her side. She later decided to give the talisman to Captain Rostron, who was captain of the Carpathia, the ship that rescued Titanic survivors.

Why do you think Margaret took the Ushabti with her into the lifeboat? If you were in Ms. Brown’s shoes, what would you take to bring along with you? Whatever her reason, it was because of her quick thinking and a last-minute decision that we can display her Ushabti as part of our “Heroine of the Titanic” exhibit! When you visit, ponder on the mystery of the ancient Egyptian relic and its significance on the Titanic.