“Servants of Mrs. Brown Poisoned”, reads a headline on page one of the May 7, 1904 edition of the Denver Times. “Five of the servants seriously ill from eating contaminated food but the family escaped any issues,” it continues. Sam Gleason, stable boy, Mary O’Fallon, cook, Annie Schleining, second girl, Sadie Johnson second girl, and John Kern, coachman were diagnosed with ptomaine poisoning, a common name for food poisoning in the early 20th century. The culprit appeared to be the food prepared for meals, which the servants ate but the family did not partake.

This account gives us many clues as to life inside 1340 Pennsylvania St., not only for the Browns but for the servants who worked and at times, lived in the house. For a household of the size and wealth of the Browns, five is an average number of servants to employ.  It would have been commonplace for a household to employ at least a cook, coachman, stable boy, personal maid or maids for the ladies of the house, and maids to perform general tasks around the house such as cleaning, greeting guests and serving food. The servants would be released when the Browns went on long trips and new servants rehired upon their return. More servants would have been hired when needed for large events.

Another notable feature of this article is the fact that servants of Mrs. Brown are mentioned in a front-page news article at all. It would have been much more newsworthy if the family, Margaret, her children or her husband, J.J., had gotten sick. By 1904, Margaret and J.J. were well-known in Denver social circles. They had lived in Denver for a decade and had participated in a number of well-known fundraisers and other events fundraisers for the juvenile courts of Judge Ben Lindsey. But none of the family got sick. Instead, the article explains that Margaret Brown and her daughter, Helen, were busy preparing for a juvenile court benefit and therefore, did not eat the meals that were prepared by the staff. The article does say that ptomaine poisoning was rampant last summer, so perhaps the newsworthiness is the fact that food poisoning is popping up again in a house in Denver. There is no other mention in the 1904 Denver Times about any servants in any other social elite household getting ill.

Margaret Brown seemed to have a close relationship with some of her servants including Mary Fitzharris Nevin and Mary Mulligan. Mary Fitzharris Nevin, an Irish immigrant, worked for the Browns from 1887-1889 while they lived in and around Leadville.  According to some accounts, Margaret would bring Mary along to participate with her during her tutoring lessons. Mary Mulligan worked for the Browns in Denver from around 1899 until 1904. Mary is listed as a housekeeper on census records in 1900 and also made dresses for Margaret. In 1900, Mary accompanied the Browns on their long trip abroad to destinations such as Germany, Japan, China and India as evidenced by the photograph taken of Margaret and Mary dressed in kimonos. 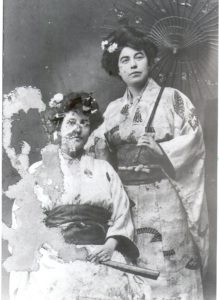 In the late 19th century, Colorado was a growing rapidly in wealth and industry leading to an increase in wealthy and middle-class households that could afford domestic servants. According to the 1880 Colorado census, domestic servants only made up about 2.5% of all workers in Colorado. 71% of the domestic servants were women and 38% of all women employed in Colorado worked as domestic servants. The next highest female occupations were tailors, dressmakers and milliners (18%); laundresses (9%); teachers (8%) and hotel and restaurant keepers and employees (7%). By 1900, domestic servants increased to 4% of the workforce in Colorado, the majority of whom were still female workers. In some census records and other calculations, domestic servants also include laundresses, both inside and outside the home, nurses and housekeepers. In 1900, most female domestic workers were white, between the ages of 16-44 and about half were born in the United States. In Colorado in 1891, domestic servants earned between $3.50 and $8.00 a week with board. The only professions that earned less were factory girls and cash girls.

An 1894 opinion piece in The Woman Voter and the Western Woman, published in Denver, grapples with the “great social problem” involved in the word servant and laments the lack of “good servants” due to the great upheaval of every aspect of society.  [Snippet from article]

“The broad fact is that no class is what it was. Society is not what it was. The middle classes have felt the change and developed into a position quite differently than they formerly occupied. The laboring classes have followed suit; they have asserted their strength … In the first place, there has come with increasing wealth and luxury a regular demand for household labor. Time was when in middle-class families, the boys were apprenticed to trades and the girls took an active part in household duties. Now the boys become clerks or struggle into professions and the girls devote themselves to the frivolities of society or give themselves up to elegant idleness.”

The opinion-piece continues to say that the other problem with servants is a lack of good mistresses to train them properly and the need for servants is higher than the supply- leading to higher wages and the ability for servants to change jobs often if they are unhappy.

But by the early 20th century, the nature of help and domestic servants changed rapidly.  In 1910, domestic servants only make up 3.5% of the total workers in Colorado. Women still make up the majority of domestic servants but only 16% of women who work are employed as domestic servants. The need for domestic workers continued to decrease over time as the advent of manufacturing and other new technologies changed the needs of the household. Grocery stores, canned goods, restaurants, and clothing producing factories changed how goods are produced in the house. Technology such as hot and cold running water, electricity, central heating, refrigerators, washers and dryers and vacuums made housekeeping chores easier to accomplish. Finally, the supply of female domestic workers decreased as more diverse opportunities open for women in clerical, technical and sales occupations.

By the 1930s, only 6.5% of households in Denver could even afford domestic servants. The advent of war furthered the decline in the number of domestic servants as women began to enter the workforce in industrial jobs in larger numbers, taking over for the men who had gone to war. As the end of World War II approached and a time of peace began, the time of household domestic servants was for all intents and purposes at an end. Instead, housewives were expected to do more of their own household work while bringing in specialized part-time workers such as cleaners or nannies if the household budget allowed.

The Woman Voter and Western Woman. Vo. 2. No.22 December 13, 1894. Retrieved from Coloradohistoricnewspapers.org