It is a well-known fact that Margaret Brown traveled to many places throughout the world. From New York to India, Paris to Moscow, she visited dozens of places over the course of her life, often picking up artifacts, art and inspiration along the way. One of the most striking and prominent examples of this in her house at 1340 Pennsylvania Street in Denver is that of the lions which give the Molly Brown House its name, “The House of Lions”. Like many other objects in the house, the origins are largely unknown. There are three statues on the facade of the house. Two stand sentinel on pedestals in front of the main stairs, while another lies sleeping next to the small staircase leading to the south side of the house. One source, Cornelia Kaiser Metz, whose parents rented the house from Margaret around 1918, claims that this sleeping lion was imported from Italy. The other two are believed to have been made from a local statuary shop. Besides this, and the fact that the sleeping lion was stolen in 1982 and found smashed in a field a few days later, there is little known information on her inspiration or where she bought these lions. 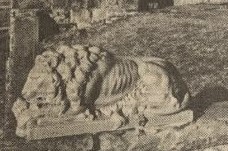 There remains little information on where Margaret acquired the sleeping lion statue, or the artist who created it. However, the inspiration for the piece appears to bear resemblance to the sleeping lion at the Vorontsov Palace in the Ukraine. Vorontsov has been a summer palace for many affluent Russians since its construction in the 1700’s, and was even used to host the Yalta peace conference after the Second World War. The lion statue at the Molly Brown House is nearly identical to the two on the steps of this palace in the Ukraine, with paws crossed over each other and the expression of a sleeping cat on their faces. Indeed, the resemblance is uncanny. We know that Margaret took a trip to Russia in 1913, which correlates with the date of the sleeping lion, which is believed to have been at the house since somewhere between 1919 and 1932. In 1913, Margaret paid a visit to her friend Princess Stephanie of the Romanov family in Russia. It is possible that, when visiting, perhaps she passed through Vorontsov in the Ukraine, or spent part of her time at this palace with the Princess. Margaret was visited by Princess Stephanie yet again in 1918, when she stayed with her after escaping execution in Russia. It is possible that the lion was a gift from the Russian royal, or even that Margaret had it cast around this time for other reasons. This idea is backed by the fact that the museum has two brass artifacts owned by Margaret with the Romanov family crest. We know for a fact that she did have some souvenirs from her visit to Russia, and this lion may very well have been another.

Courtesy of the Denver Public Library.

The standing, sentinel lions at the very front of the house also have an unclear history. We are unsure of who made them or what inspired their creation. A few years before 1910, Margaret renovated her front porch to more closely resemble her neighbor’s grander façade, adding a retaining wall, sandstone balusters, and these two seated sentinel lions with ribbons in their mouths. By 1910, the sentinel lions appeared in historic photographs of the house. It is thought that they were cast by a local statuary shop, but there is no concrete evidence to support this. The somewhat headdress-styled mane seems Egyptian-inspired, but Margaret had not traveled to Egypt as of 1910. However, it is possible that she saw statues like these on other travels, including possibly to the 1904 St. Louis World’s Fair, which had art and design from many different countries.

We can only postulate about the inspiration and origins of Margaret’s lion statues, as there are few photos and even fewer articles or letters referencing them. However, we can say for certain that Margaret used these lions to add her own personal eclectic touch to the Capitol Hill house, and they have given the home a reputation over the years as the “House of Lions.”