Land of the Free and Home of the Brave, But Who Can Vote? 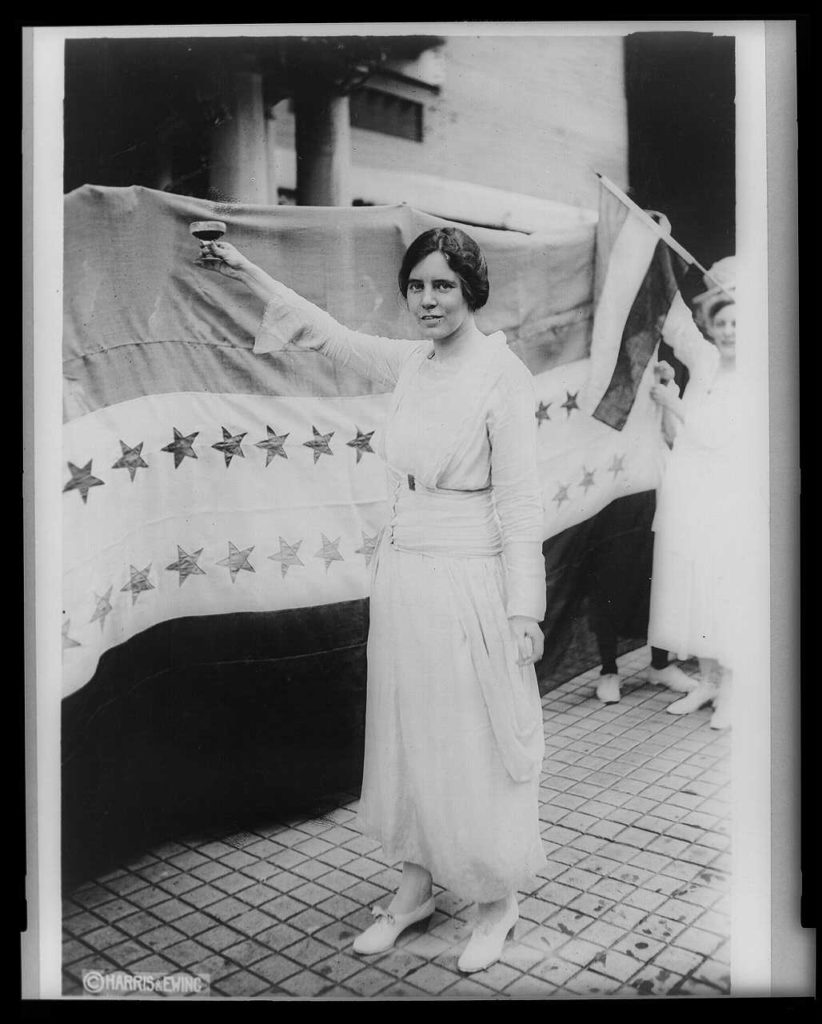 The passage of the 19th amendment in 1920 was a seminal moment for women’s rights and voting rights in the United States. When combined with the 14th and 15th amendments, citizens of the United States could not be denied the right to vote based on color, race, previous condition of servitude or sex.  But although the passage of women’s suffrage nominally opened up the voting booths to millions of women, there were still millions of women who were excluded on the basis of race, color and ethnicity.

The political power of women in Native American tribes inspired suffragists such as Elizabeth Cady Stanton, Susan B. Anthony and Lucretia Mott to fight for the right to vote. But those same Native American women were still barred from voting in 1920. Zitkala-Sa was a Dakota woman who spent her school years navigating between her traditional cultural heritage at the South Dakota’s Yankton Indian Reservation and assimilation into Euro-American culture at a boarding school for Indian children in Wabash, Indiana. She was an advocate for women’s rights, Native American rights and the preservation of Native life. Zitkala-Sa and most other Native American tribal members were not admitted as a citizen to the United States until the passage of the Snyder Act of 1924. Even after Native Americans were granted citizenship, state and county legislations employed discriminatory strategies and mechanisms such as poll taxes, literacy texts and intimidation, to keep them from exercising their voting rights.  In 1948, Native Americans in New Mexico and New Mexico successfully litigated their right to vote. The last states to enfranchise on-reservation native Americans were Utah and Nevada in 1957 and 1958, respectively. 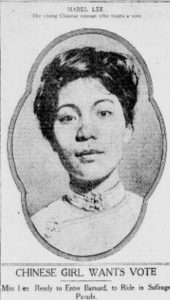 In 1921, Mable Ping-Hua Lee became the first Chinese woman in the United States to earn a doctorate, but she was unable to become a citizen. The Chinese Exclusion Act of 1882 severely limited immigration for over 100 years and also excluded all Chinese immigrants already living in the United States from citizenship. Any children born in America were guaranteed citizenship by the 14th amendment, but Chinese immigrants in the United States were considered permanent aliens and were not eligible for naturalization.  Representatives of the Chinese community, including Mabel and women from Boston, Portland and New York City worked with suffragists because they cared about women’s rights but also because they wanted to convince Americans that stereotypes about Chinese people were wrong. Chinese immigrants like Mabel Lee would not become eligible for naturalization and voting until the passage of the Magnuson Act in 1943. 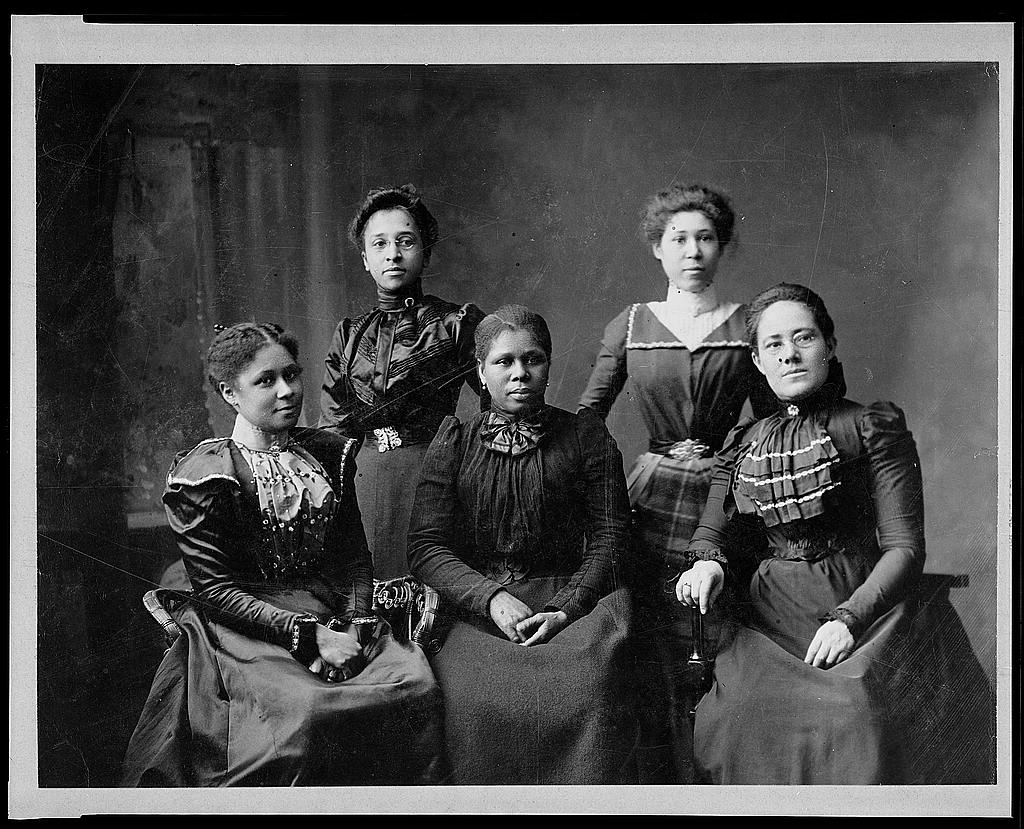 The extension of the right to vote to black citizens after the passage of the 15th amendment was strongly resisted. Terrorist organizations such as the KKK used violence and intimidation to stop voting. As early as the 1890s, states began to amend their constitutions to enact a series of laws designed to prohibit black citizens from voting.  When African-American women demanded the right to vote, they faced resistance from racists, sexists, and from other suffragists. The complicated reality of the women’s suffrage movement is that the very women we see as heroes for securing the right to vote often excluded black women from participating. Although many prominent white suffragists had publicly opposed slavery and supported equal rights for African Americans, black women were often barred from joining women’s rights organizations or marginalized within those organizations as being inferior.  As passionate as some white suffragists were about progressing the cause for all women, the task still fell to women of color to organize and empower the black community for the advancement of their own interests. 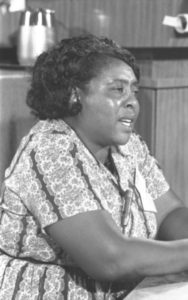 Although African-American suffragists successfully campaigned for the passage of the 19th amendment, the fight was not over. Fannie Lou Hamer was three years old when women in the United States were enfranchised. For Fannie, just attempting to register to vote was a political action. At age 45, she was rejected from registering to vote because she didn’t pass the literacy test required by the state of Mississippi. As a result of her political action, she lost her job as timekeeper at a plantation and was shot at during a drive by shooting by white supremacists. Hamer would fail the literacy test one more time before passing on the third try in January of 1963. However, when she went to the polls in the fall, she soon discovered that her registration gave her no power to vote as the county required two poll tax receipts.

In 1920, nineteen states had laws that required the payment of a poll tax to register to vote. Proof of payment was required at the polls in many states. Although poll taxes were primarily focused on stopping enfranchisement of black citizens, all citizens of the state were required to pay them in order to register, thus also discriminating against women, the poor, Native Americans and other groups. Fannie Lou Hamer continued her political activism and the fight for African-American voices to be heard in the Democratic party despite experiencing police brutality and forced sterilization due to her race. 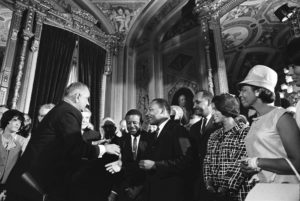 After 95 years from the passage of the 15th amendment, countless marches, demonstrations and speeches by civil rights activists like Dr. Martin Luther King Jr and others federal legislation prohibiting these discriminatory voting laws was passed. In 1964, the passage of the 24th amendment ended the practice of poll taxes for voting in federal elections. Still only 2% of African Americans were registered to vote.  The Voting Rights Act of 1965 signed by President Lyndon B. Johnson prohibited racial discrimination in voting by preventing any state or local government from imposing any voting law that results in discrimination to racial or language minorities.

Although laws have been passed to stop discriminatory voting requirements, the ability of American citizens to vote can still be suppressed through lack of residential address, lack of transportation, language barriers, lack of access to mail and other isolating conditions. Many states also disenfranchise felons either during their period of incarceration or even permanently for certain crimes.

“We who believe in freedom cannot rest until it comes.” – Ella Baker, civil rights and human rights activist

For more information, check out:

Before the Voting Rights Act: https://www.justice.gov/crt/introduction-federal-voting-rights-laws

How the Native American Vote Continues to be Suppressed: https://www.americanbar.org/groups/crsj/publications/human_rights_magazine_home/voting-rights/how-the-native-american-vote-continues-to-be-suppressed/