Located about two hours southwest of Denver is the town of Leadville, Colorado. Leadville holds the title of the highest elevation of a city in the United States at an impressive 10,152 feet. Established in 1877 by Horace Tabor, propelled by a silver boom, Leadville became one of the fastest growing communities in the country.

In 1880, Leadville was one of the world’s largest and richest silver camps, with a population of more than 15,000. Income from more than thirty mines and ten large smelting works produced gold, silver, and lead amounting to $15,000,000 annually. Leadville quickly became one of the nation’s wealthiest communities. The town was doing so well that a brand-new school large enough to hold 1,100 students was built. But like many boom towns before it, economic hardship was about to strike and the fate of the small community hung in the balance.

In 1890, the Sherman Silver Purchase Act was passed in order to stop the drain on US gold reserves which fueled the silver boom in Leadville. However, in 1893 the government repealed the Sherman Silver Act and put a halt to the silver production. All of a sudden the flourishing town found itself in the middle of the silver crash. The town began to suffer and found themselves at a standstill in the middle of the Panic of 1893. Mines were closing left and right leading to mass layoffs and unemployment. The population of Leadville was over 40,000 in 1893 but with the economic depression raging and businesses closing, the population dropped to 15,000. How would town survive? How would they be able to support the community?

At the time of the repeal of the Sherman Silver Act in 1893, the Brown’s were still living in Leadville and were quite wealthy thanks to J.J.’s involvement in the Little Johnny Mine. J.J. was worried about the future of Leadville and began to brainstorm ideas on how to bring in money. More than anything, the former self-proclaimed silver capitol of the world needed a morale boost. Mr. Brown decided to hold an important meeting with members of the community to discuss Leadville’s economic future.

The all-important meeting took place at the Vendome Hotel on October 25, 1895. Over four days the gentleman came up with a plan to save the mining town. It was decided that the town would build world’s finest palace completely made of ice. The Montreal Ice Palace that had inspired the idea had cost Canada a whopping $5,000. Wanting to outdo the Canadian masterpiece the members of the meeting decided that the Ice Palace in Leadville would have to be much bigger. The cost of the colossal project was an estimated $20,000 to launch the job, critics questioned how much the undertaking would cost once completed.

J.J. Brown decided to see the project through. Already an accomplished business man Mr. Brown became a member of the board. The undertaking of the project was unlike anything Leadville had seen before. Between 250 and 350 laborers and craftsmen were hired to create the artist’s vision of the Ice Palace from 5,000-6,000 tons of ice all brought in from nearby lakes and ponds. The project helped with the unemployment epidemic. Despite its size and grandeur, the Ice Palace was completed within 36 days from the time the cornerstone was laid. The individual ice blocks weighed between 300 and 600 pounds each. The location of the Palace was chosen on five acres of land between West 7th Street and West 8th Street from Spruce to Leiter (near the present day National Mining Hall of Fame and Museum.)

In early November, 1895, work was started to prepare the land. To build the actual Ice Palace, laborers, craftsmen, and stonemasons were hired (and paid very well for the time.) The Leadville Ice Palace was underway shop owners were making money, people began spending money, and the town’s economy appeared to be coming back to its former glory. The finished Palace was larger than the original Broncos football stadium at Mile High! Two main octagonal towers were 90’ high, 40’ in diameter and 126’ in circumference. The other towers were 60’ high and 45’ high respectively. The walls were 38’ high with buttresses and other trappings of a medieval castle. 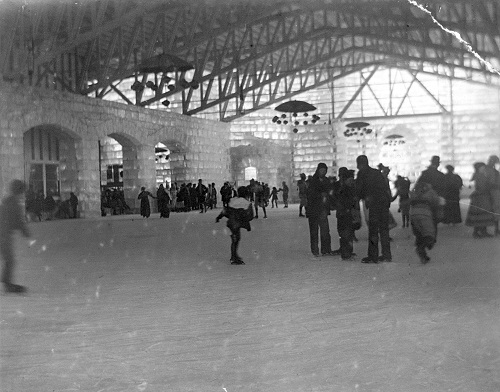 The Crystal Palace and Carnival officially opened on New Year’s Day 1896. The grandeur of the Palace included a skating rink which could hold 1,000 skaters. The room was resplendent with ice pillars with colored lights in their core and arches with ice sculptures highlighted. There were dozens of exhibits frozen in the walls. A skate master and assistants taught ice skating lessons and couples skate dancing.

There was a Curling Rink for sports enthusiasts and a Grand Ballroom large enough for 80 couples which included a dance master and instructors. The Reception rooms were furnished with carpets, wall hangings, sofas and chairs, and framed paintings; the dressing rooms had maid and valet service. Coal stoves heated these rooms. The cloak rooms were similarly furnished.

There was a very large dining room made to serve meals of local Colorado game, and also a walk-up/skate-up snack bar. Concessions in the Ice Palace included a cigar stand, confectionary, hot popcorn and peanut stand, soft drinks, and candy. In addition to foods, there were concessions to sell mineral specimens, gems, furs, and taxidermy goods. Famous Western photographer W.H. Jackson displayed photographs of 20 views of Colorado scenery. One of the sights worthy of Teddy Roosevelt himself were exhibits consisting of everything from the most delicate flowers of the region, to the largest game animals frozen in blocks of ice.

The little mining town was very excited to debut their hard work and show the world that Leadville was not done yet. The citizens began to prepare for their roles in the large undertaking. Bands and orchestras were hired for dancers and skaters; Leadville citizens painted their houses; the depot and alleys were cleaned up; buntings, flags and streamers were hung. It was every citizen’s duty to add to the beauty of the carnival with bright attractive costumes. The Carbonate National Bank exhibit displayed $150,000 in bars of pure gold from the Little Jonny Mine in the bank’s lobby.

Leadville was thrilled for the work and excited about the extraordinary project which would bring thousands of visitors and cash to the mining camp. However, the project faced problems of various kinds. It was much warmer than usual, on December 2nd a Chinook wind blew in and the temperature steadily rose through December 12th was a steamy 65 degrees. The Director General of the Ice Palace used $5,000 of his own money to buy 10,000 yards of muslin to protect the walls from sun and wind.

Even with the warm winds blowing the project was completed and ready for the world to see the stunning pride of Leadville. On January 4, 1896, 1,000 Denverites left for Leadville and the opening of the Ice Palace. The three railroads coming into Leadville hosted a hospitality center, and Glenwood Springs promoted a special deal at the Hot Springs.

The residents of Leadville were ready with parades, floats, and costumed escorts from the depot to the Ice Palace. There were competitions and contests with elaborate and expensive awards throughout the life of the Ice Palace. The local sports clubs had specially designed uniforms for hockey, skating, snowshoeing, curling and other winter sports.

The Ice Palace survived from the beginning of January until March 28, 1896 and enticed visitors from all over the United States and even some from Europe. It was an amazing undertaking and in most any other year it would have survived much longer. However, the average temperature for March 1896 was an unbelievable 71 degrees leading to an early closing of the Palace. However, the skating rink was used until June 1st. Thousands had come to enjoy this remarkable undertaking. The state of Colorado was blown away by the beautiful Palace. A newspaperman from Colorado Springs said, “…I am simply astounded. The magnitude of the undertaking is almost awe inspiring….” The entire town of Leadville participated as a laborer, hospitality, or as a vendor.

Welcoming visitors to Leadville, the constant parades, and the contests provided a morale boost for the town, but also exhausted the citizenry. This huge undertaking required much from all. Thousands were inspired by the project and the people of Leadville were proud. But overall it was a financial failure. The Director General reportedly spent $22,000 of his own money to complete the project. While the exact overall cost is not known, the best reports say it was somewhere between $35,000 and $65,000. Some report the cost as much higher with the expensive awards, other outside costs and cost overruns. A banker said, “I’ve never heard of a man complain of paying for a good time, and I’ll tell you….We had one good time!”

James Joseph Brown, a man born and raised in Coal country always tried to do his best by the miner. From fair wages, charitable organizations; and his vision and involvement in the creation of The Ice Palace it’s a perfect embodiment of J.J.’s character. The Ice Palace is a testament to the spirit of the hard-working miners, and their refusal to quit. Although the Ice Palace did not bring in the desired commerce, it did something much more important. The Ice Palace restored hope to a crippled community, and gave Leadville back a sense of self.