For the second year in a row, the Molly Brown House Museum is hosting a summer intern from Ireland, through Project Children. With that, we thought we’d explore a little bit of the history of the Irish in Colorado!

In the summer of 1845, the late blight fungus completely decimated the potato crop, which was fundamental to the Irish way of life, across the fields of Ireland. This incident is known as the Great Famine (1845–52). Out of a population of eight million, approximately one million people died during the famine and 1.5 million were driven to emigrate from Ireland, either from starvation or from landlords evicting their poorest tenants. 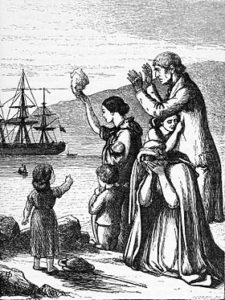 Large-scale immigration to the United States from Ireland was spurred by the Great Famine during this terrible period; the voyage was made on what were called the “Famine Ships” or the “Coffin Ships”. These ships were overcrowded British sailing ships, poorly built and often not seaworthy. Each journey would take between 40 days to three months. Many of the immigrants never reached their destination due to starvation, typhus (nicknamed the “black fever” because it blackened the skin) or other diseases — the ships became their coffins.[1] In 1847, 100,000 Irish sailed to North America; an estimated one out of five died of disease and malnutrition.

Between 1845 and 1855, it is estimated that 1.5 million Irish immigrated to the United States, making up 40% of the total number of immigrants to American during those years.[3] Even after the generation of Great Famine migrants, the Irish continued to immigrate to the United States in high numbers. Many of them worked their way from eastern cities to the mines out west.[4] The immigrants were mainly Catholic, impoverished, and unskilled workers from rural areas.

Individuals and families moved with the hopes of a better life, but in America, the Irish were met with discrimination and back breaking labor. There was a reappearance of Nativism in America in the late 1800s. Americans believed the interests of native-born citizens should be given favor over newly arrived immigrants. After the Panic of 1873, when 1 in 8 Americans became unemployed, immigrants were blamed for the high levels of unemployment.[5] Immigration to America was restricted on August 3, 1882 by the 1882 Immigration Act, which was one of the first comprehensive immigration law enacted by the federal government. Another law limited immigration was the Chinese Exclusion Act of 1882, which suspended immigration of Chinese laborers. 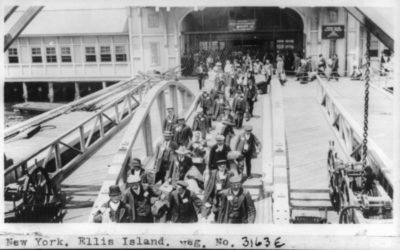 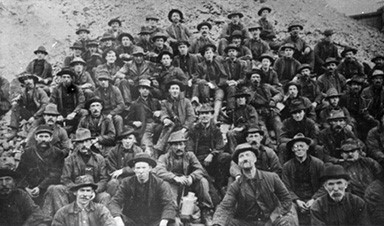 The Irish arrived in Colorado with the discovery of gold in the late 1850s. Irish immigrants came to Colorado from other mining regions in North America and the British Isles. When they arrived, they took jobs as miners, soldiers or railroad workers. Many immigrants lived where they worked, sometimes in remote areas. In the nineteenth century, the Irish were the second largest foreign-born ethnic group in Colorado, with the major sites of Irish settlement being Leadville, Cripple Creek, and Denver. In the 1870 Denver Census, 60 percent of Irish men are listed as common laborers, while 70 percent of the single Irish women are listed as domestic servants.[6]  Those numbers mirror the jobs of Irish immigrants in mining towns such a Leadville.  Leadville was known as the Little Ireland of Colorado, with first and second generation Irish residents numbering over 4,000 by 1880.[7] Some scholars argue that the Irish in the West did not have it any easier than those in the American East, contrary to common belief. In the mining camps of the West, the poor and the hungry worked with the hope of financial stability and experienced everyday racism.[8]

The Irish in Leadville had a strong community and had an impact on growing the city, building their own church, the Church of the Annunciation in 1879. They also had a large impact on local labor movements. Mining strikes in Leadville demanding higher pay and better working conditions were often led by Irish born immigrants. Michael Mooney, born in Dublin, led a peaceful strike in 1880. The 1896 miners’ strike, led by Donegal-born Edward Bryce, became violent as strikers attacked the mine and at least eight miners were killed. 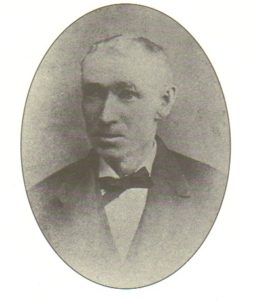 Margaret Brown’s family was directly affected by the Irish diaspora that landed so many Irish immigrants in the United States.  John Tobin, Margaret’s father was born in County Cork, Ireland in 1823 and came over to the United States as a boy due to the famine and Irish uprisings. Family lore claims that John worked with abolitionists in Virginia and assisted in the Underground Railroad. The death of his first wife prompted him to move west to Hannibal, Missouri. 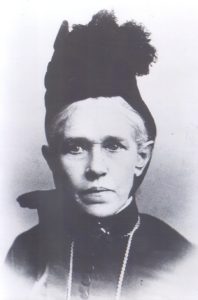 Johanna Collins Tobin, Margaret’s mother, was born in Ireland in 1825 and spent most of her childhood in Pennsylvania. She was a descendant of fighters in the Irish resistance. After the death of her first husband, Johanna also moved to Missouri where she wed John Tobin.

In Missouri, the Tobin’s were very active in the Irish Catholic community. They made a point of educating their children and fostering political awareness and the belief in basic human rights, which Margaret would later vocalize in her call for women’s and workers’ rights. Eventually, John and Johanna made their way farther west, moving into Margaret and J.J.’s home on Pennsylvania Ave in Denver.

By the early 1900s, the Irish started to move to the Denver area in greater numbers. In 1910, 44% of the Colorado Irish population lived in Denver, including the Browns. Ever since, the Irish have had a strong presence in Denver’s politics. Denver’s first Irish Catholic mayor was elected in 1962.

From the Irish struggles and hardships, to their triumphs that made Denver a more tolerant place, the Irish culture runs deep all throughout Colorado. From the life and story of our very own, Margaret Brown, to those whose names have been lost to history, Denver is what it is today, because of them.

By: Brittny Saldana and Jen Kindick

[2] “An Act to Regulate the Carriage of Passengers in Steamships and other Vessels” (PDF). Library of Congress. March 3, 1855

[4] Barrett, James R., and David R. Roediger. “The Irish and the ‘Americanization’ of the ‘New Immigrants’ in the Streets and in the Churches of the Urban United States, 1900-1930.”