Helen Tobin Kosure Through the Eyes of Her Scrapbook

When asked what kind of Senator she would make, Margaret Brown dealt a “crushing blow to the anti-suffragists who solemnly maintain that the vote will break up homes and spoil women as wives and mothers” when she proclaimed herself a mother of fourteen. She explained that she not only mothered her own children, but twelve of other family members, and she was deeply involved in supporting Judge Ben Lindsey’s juvenile court. She said, “Children have been my passion.”

By the time Margaret considered a bid for United States Senate in 1914, 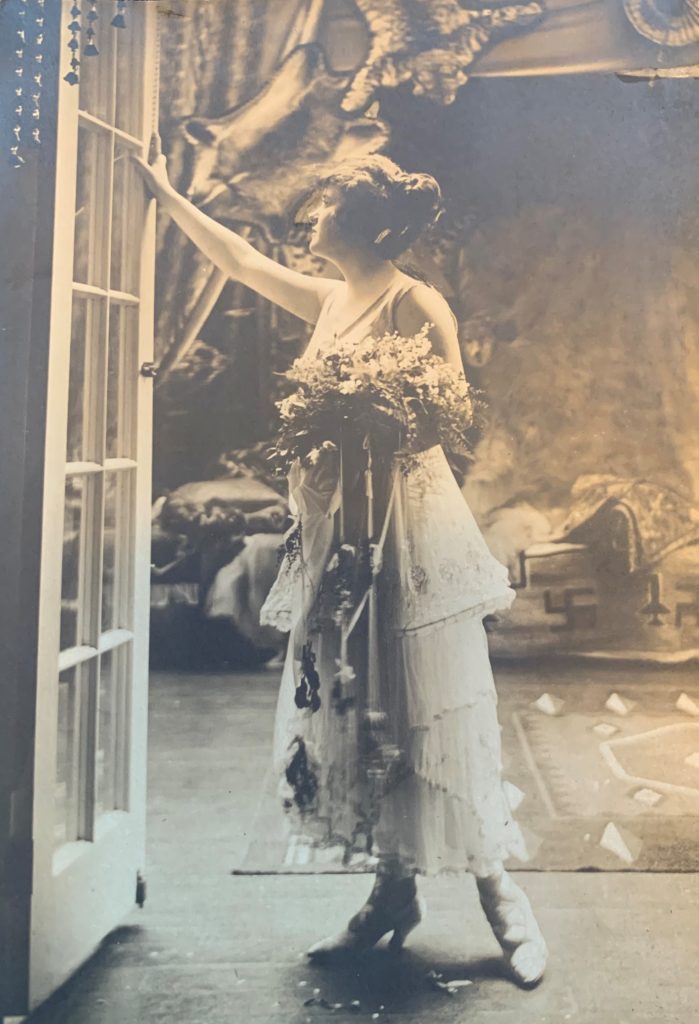 all her children were grown and married except the youngest of her nieces, Helen Tobin, who was still under her aunt’s wing in Newport, Rhode Island. Helen’s mother, Margaret’s sister-in-law, passed away from illness when Helen was just five years old. She and her three siblings, Grace, Frank, and Florence were left in the care of Margaret and J. J. Brown, who raised them as if they were their own children.

Helen lived with her aunt at the Denver home and, beginning in 1911, at their new Newport cottage, a mansion on Bellevue Avenue which Margaret called, “Mon Etui.” In Newport, they mingled with the elite including Alva Vanderbilt Belmont, who was at the forefront of high society as well as the women’s suffrage movement, for which Margaret became especially passionate. Although Helen was present at a few of her aunt’s and Mrs. Belmont’s very notable suffrage meetings, Helen remained opposed to suffrage and stated that she could not see “how auntie expects to get any fun out of being Senator.”

Through the years with Margaret, who was like a mother to her, Helen collected photographs, articles, brochures, letters, and other original materials about Denver and Newport, about the many socialites and royalty with whom they rubbed elbows, about Margaret’s philanthropic and political achievements, about both World Wars and the Titanic. Helen eventually compiled these documents into a scrapbook that illustrates so much about their lives. This artifact was recently donated to the Molly Brown House Museum by Helen’s descendants, Scott Vollrath and Carol Marenholz, and we are going to explore more about Miss Helen Tobin through the lens of her scrapbook.

The Brown family may not have been on very friendly terms with Denver’s self-proclaimed queen of society, Mrs. Crawford Hill, but they certainly found themselves at the very center of aristocracy in Newport. Bailey’s Beach was a highly exclusive private beach off-limits to anyone outside the tight circles of Newport’s elite, like the Vanderbilts and Astors. Friends of these high-profile families were Margaret Brown and Helen Tobin, who both frequented Bailey’s. The society pages gushed about these outings, and praised Helen in particular:

“Miss Helen Tobin, Mrs. Brown’s adopted daughter, is one of the most popular girls on Bailey’s Beach these days, and, with her winning personality, is making herself liked wherever she goes.”

Margaret’s own children by birth, Helen Brown Benziger and Lawrence Brown also lived with their families at Mon Etui for a year or two, but they managed to stay far away from the papers and social gatherings. Helen Brown expressed over the years her dislike of being in the public eye, but more similarly to her aunt Margaret, Helen Tobin felt very comfortable in the spotlight. She was described as one of the most prominent Newport debutants, and thanks to her aunt’s social standing, she mingled with the Vanderbilt and Astor children, not to mention a duke and duchess, a prince, an ambassador and a countess, records of which she enthusiastically scrapbooked.

In a 1914 Newport society page, Helen’s photograph appeared on the full page with the headline “Newport’s Most Beautiful Girl of the Season.” It read, 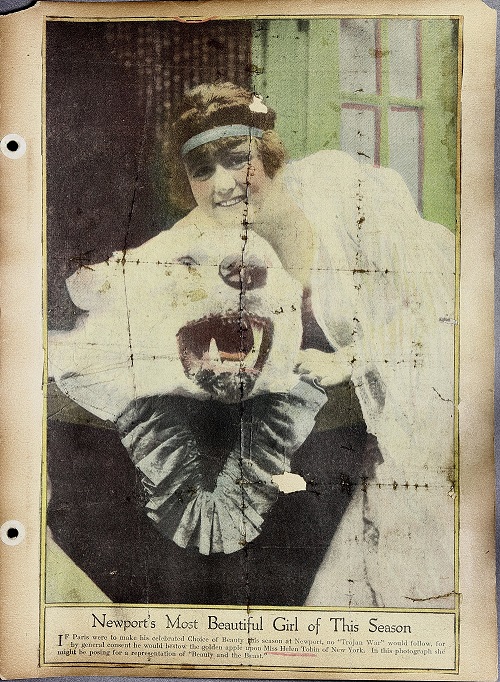 “If Paris were to make his celebrated Choice of Beauty this season at Newport, no ‘Trojan War’ would follow, for by general consent he would bestow the golden apple upon Miss Helen Tobin.”

Helen’s sister Florence made her mark in the same social circles and caused a stir when Prince Genaro Caracciolo of Italy was said to be courting her. Rumors soon flew that they were engaged to be married. The papers exaggerated their relationship and Florence’s social position, calling her an “American heiress” to her uncle J. J.’s fortune. “He is enormously wealthy,” they touted. Not long after, she shocked all when it was announced that she would wed a childhood friend, William Harper, “rather than be a princess.” 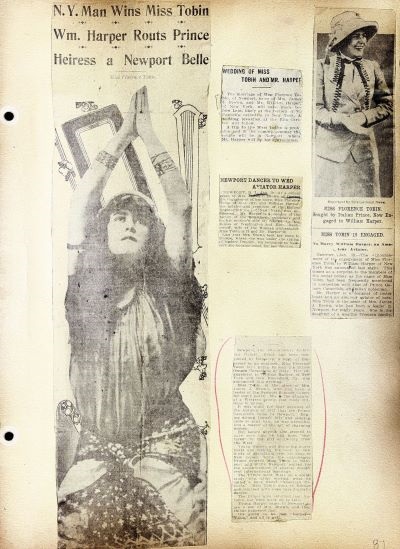 As was typical for high-society girls given the privilege to study the arts, both Helen and Florence took to the stage and became quite popular for their talent. While Florence studied abroad with Isadora Duncan, who is credited for having invented modern dance, and received a medal by the German Emperor for her performance, Helen wowed the crowd back in Newport with her versions of “the latest Parisian favorites,” Lulufado and the Argentine Serenade dances. 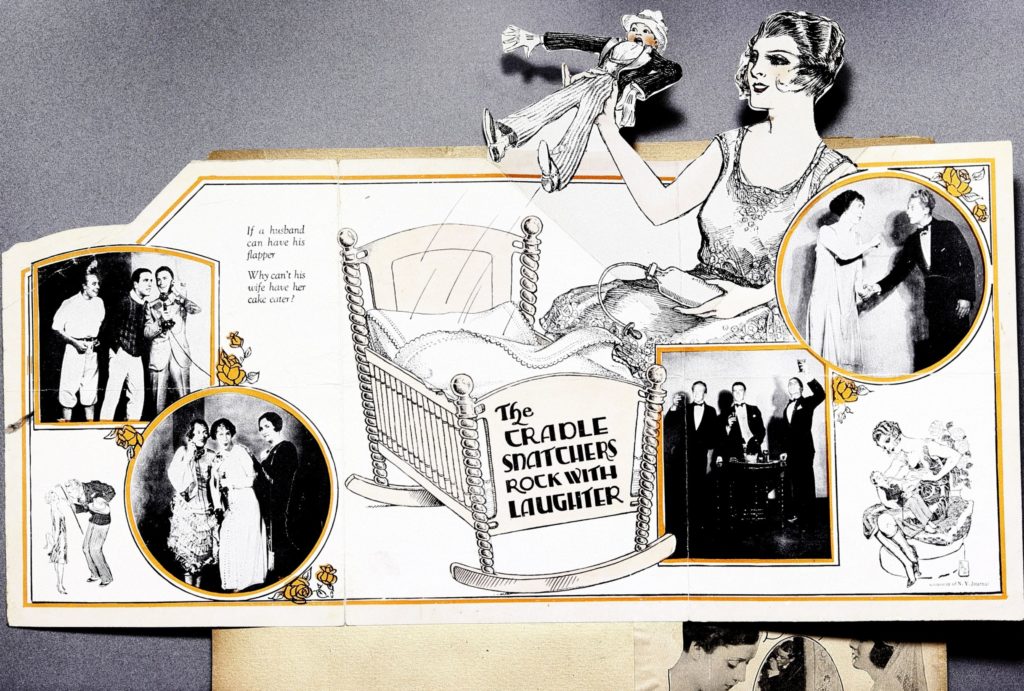 About a decade later, Helen changed her name to the more debonair “Helene,” and began to launch her acting career. She gave “a splendid performance” when she starred in the 1927 Broadway hit, “The Cradle Snatchers” alongside Humphrey Bogart who at the time was just a young budding actor. In 1932 she played the wealthy and poised Helen Morrison in the classic drama, “Stella Dallas,” which would later gain lasting fame for its 1937 film adaptation. One critic gave a glowing review in a quote which Helen underlined with particular passion in her scrapbook:

“Helene Tobin does especially credible work as the society matron who wins the love of Stephen Dallas. Miss Tobin makes a striking appearance in the role.”

While acting in St. Louis, she met King Kosure, then manager of the Coronado Hotel. The two married and moved to Kansas City, where King managed the Hotel Bellerive and Helen worked in radio. 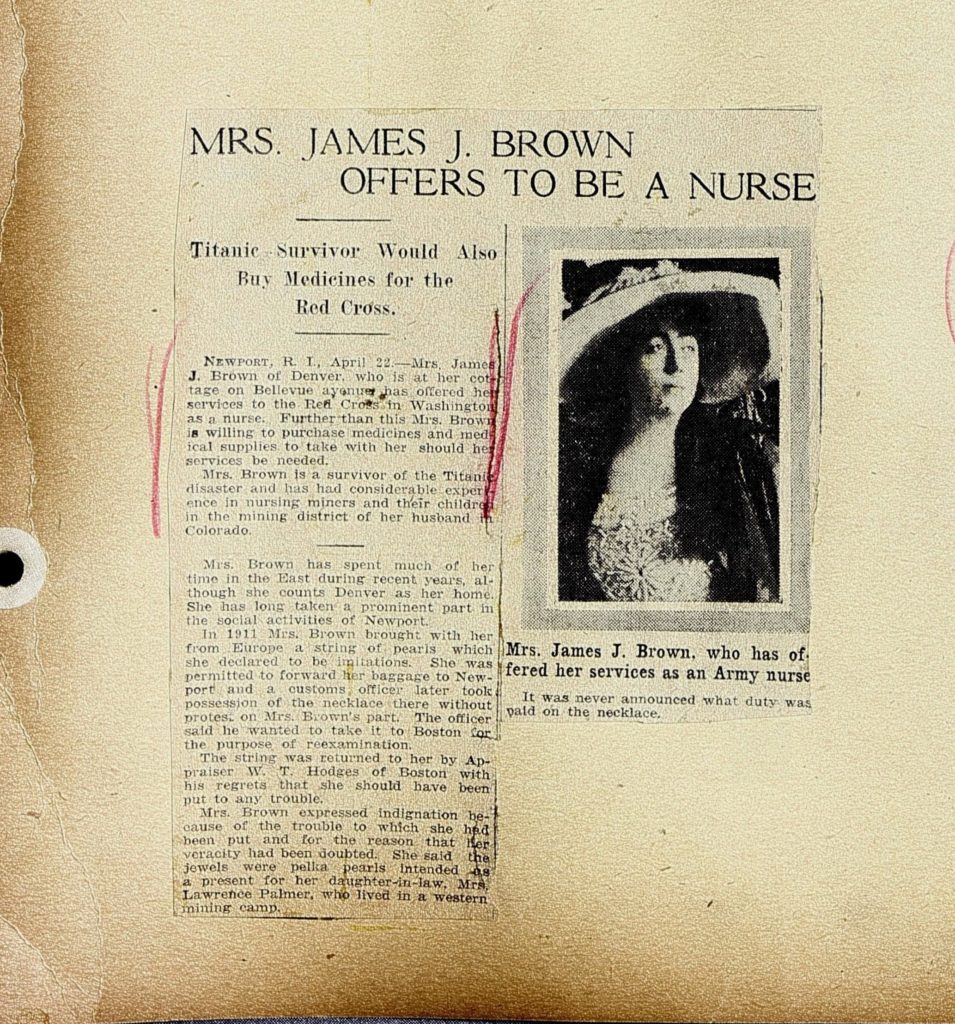 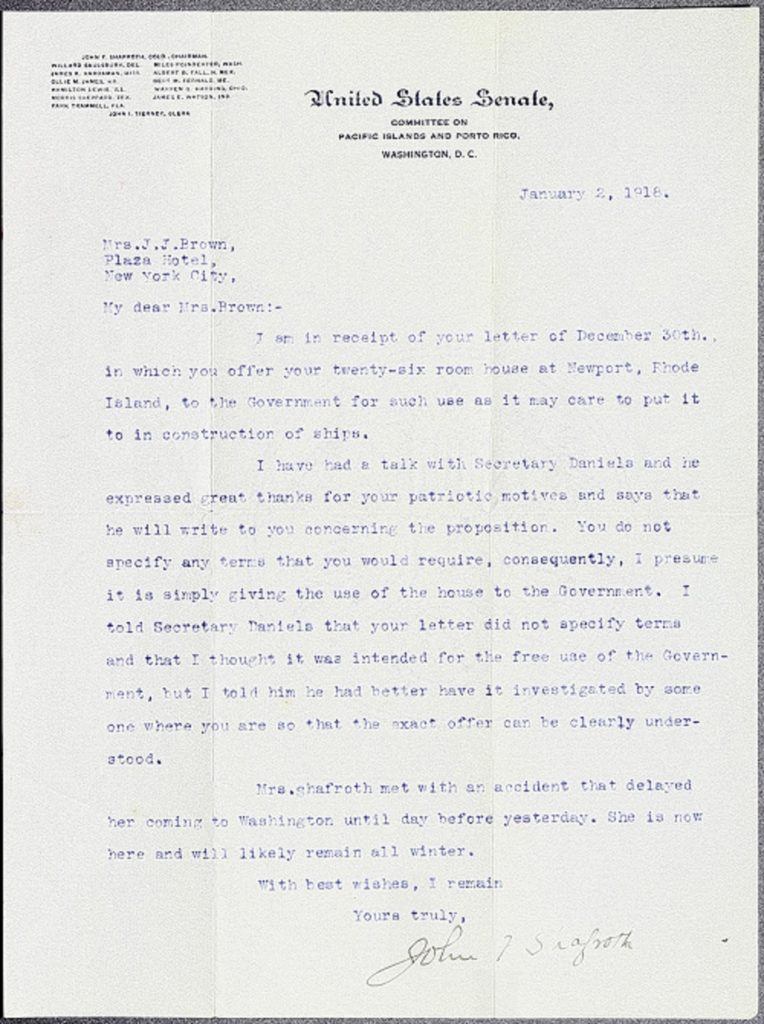 Although Helen’s scrapbook mainly features the social highlights of Newport, she also documented those less glamorous wartime years, especially of her aunt Margaret’s involvement. Shortly after the First World War began, Margaret offered her services as a volunteer nurse for the American Red Cross, and donated Mon Etui to the Newport Chapter of the Red Cross to use as a hospital. She later offered up the cottage for “use in the construction of ships” to the government, which Senator John Shafroth graciously acknowledged in a 1918 letter.

The World War was not Margaret’s first service to the army. In an effort to support the Mexican Border War which took place concurrently, and to advocate for women’s equality, Margaret headed a regiment of Colorado women to organize as soldiers to serve in Mexico. The Regiment declared it was a “Great opportunity to show that women with equal rights with men are willing to bear war burdens with men.”

Inspired by her aunt’s actions in wartime, Helen later joined the Red Cross Motor Corps during World War II to assist in providing transportation and support to canteens, military hospitals, and camps. One article from 1942 shows “Mrs. King Kosure of the Red Cross Motor Corps” assisting a paralyzed navy mess attendant to return to his home in St. Louis. 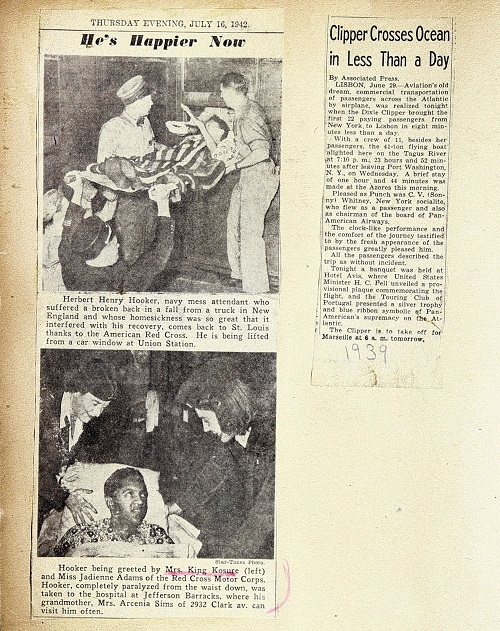 Soon after Margaret passed away, Helen received a bequest of $10,000 and invited a reporter into her apartment to discuss her relationship with her aunt, who was remembered as a renowned millionaire and Titanic survivor. In the interview, Helen exaggerated her own claim-to-fame by stating that the Little Johnny mine which made her uncle millions was, in fact, originally owned by her father, Dan Tobin. She and the reporter pored over her memorabilia and the reporter noted,

“From that point on the story is one of headlines and clippings from the newspapers. A huge scrapbook and a hat box at the Kosure apartment are filled with them.”

Could this be a 1933 mention of this scrapbook? We may never know!

Helen’s scrapbook represents her keepsakes, the highlights of her life, and the life of her famous aunt, Margaret Brown, which she lovingly collected and preserved. Although these highlights provide a sensationalized, mostly idyllic version of the lives of the Brown-Tobin family and the society in which they were immersed, the scrapbook gives us a unique view from Helen’s perspective. This version of events is what meant the most to Helen Tobin Kosure, and they represent the legacy she hoped to leave behind.

By: Stephanie McGuire, Curator of Collections