When Historic Denver, Inc. bought the Molly Brown House in 1970, it had been emptied of Brown-owned objects and was being used as a boarding house. With restoration efforts and donations from descendants, Margaret’s renters, donors and others who had bought the objects in the house, museum curators have been able to verify and replace many of the objects originally owned by the Brown family within the house. One of these select objects which have been returned to the museum is a fireplace screen that is currently in the dining room. 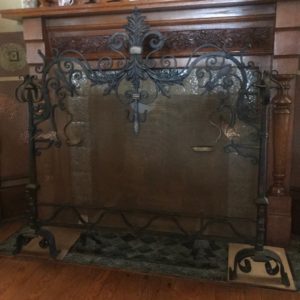 The screen itself is composed of a very ornate frame made of wrought iron and a screen made of copper. At the top of each side of the frame is a candlestick holder, and next to it an oil dipper attached to matching dragon heads and eagle wings. The oil dippers were meant to hold essential oils that would diffuse through the house with the heat of the candles and the fire.

Based on the information which the museum has, it is believed that this extremely ornately-crafted fireplace screen was designed and commissioned by Margaret herself for the house. It is estimated that she had it designed sometime between 1895 and 1905, though a solid date is difficult to determine. However, based on research, we can know who created the fireplace screen and what influenced Margaret to have this specific design made.

Tulip-shaped candle stick made by Henry Oldag. From the collection of the Golden History Museum.

The screen was purchased at the house’s estate sale in 1932 by a man named Salvator Bohe and his father. In 1966, it was sold to one Paul Johnson, who later restored it and donated it back to the Molly Brown House. A note from Bohe written in 1966 describes the selling of the screen and lists it as originally made by a blacksmith named Oldag in Golden. Henry Oldag was a Dutch immigrant and owner of the Avenue Blacksmith Shop on Washington Avenue in Golden. He was known both in Golden and across Colorado for his beautiful craftsmanship and artistic iron working skills, making many ornate items such as this for wealthy clients across the state. 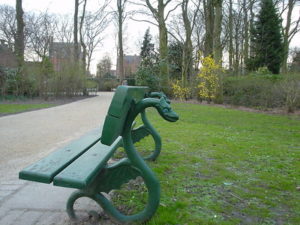 What was Margaret’s inspiration for this particular design? Looking at the dragon heads and the fleur de lis patterns in the ironwork, it is clear that there are French or Belgian influences. Indeed, the style of dragon presented here, with a more serpentine body and large eagle-like wings, is characteristic of Northern France, the Netherlands and Belgium. This particular design was likely introduced via the Viking invasions in 845 AD and later, as there are many similarities between these designs and those found in Norway and Denmark. Based on this, it can be postulated that Margaret’s inspiration for this design came from images and ironwork of dragons which she saw on her travels in Belgium or the Netherlands. This would also connect to the placement of the tapestries in this room, which are believed to be of similar origins. Furthermore, it would make sense for her to have gone to a blacksmith of Dutch origins, as he would have had more experience with this particular style of metalwork.

Of course, with just this information on the object, we can only postulate. We may never have enough information to determine Margaret’s real inspiration for having this fireplace screen designed. This is just one of the many things at the Molly Brown House Museum that have become inexplicable with time. The house is full of mysteries that we may never uncover, but as new evidence arises and more information is uncovered, we can continue gathering data about the people who lived here and the objects they used to make the home their own.