Dust to Dust: The Titanic Today and in the Future

“It was just midnight as we dropped down to the water, perhaps a minute or so after. It did not seem long before there was a great sweep of water which went over us all. A great wave rose once and then fell, and we knew that the steamer was gone. We could see as plainly as if it had been day.” – Margaret Brown. April 20, 1912. The New York Times.

Margaret Brown saw the Titanic slip under the water at 2:20 am on April 15, 1912. It would be 73 years before anyone would see the ship again. It would take technological advances including sophisticated sonar systems and unmanned submersibles with wide-angle cameras to find the wreckage of the Titanic. Since 1985, there have been several dozen expeditions to the ship to salvage artifacts and explore the current state of the wreckage.

The Titanic lies at 3,800 meters or about 12,500 feet. This area of the ocean is known as the Bathyal zone. The average temperature is 39° F. The pressure at this depth is 5,850 pounds per square inch. To understand how much pressure this is, picture 46 school buses, weighing 18,000 pounds each parked on your chest. The average scuba diver becomes incapacitated at 250 feet. This area between 1000 meters and 4000 meters is also known as the midnight zone because sunlight does not reach this depth. The Titanic is forever in darkness.

Animals who live in this zone include fish, mollusks, jellyfish and crustaceans. The pressure and depth of this area affect the size, evolution and lifestyle of these fish. They are small–usually not exceeding 25cm in length and their bodies are made up mostly of water. Fish in this area like the viperfish, eels and anglerfish are sedentary predators who lie in wait or attract prey with lures.

[photo of anglerfish and viperfish both from Wikipedia] 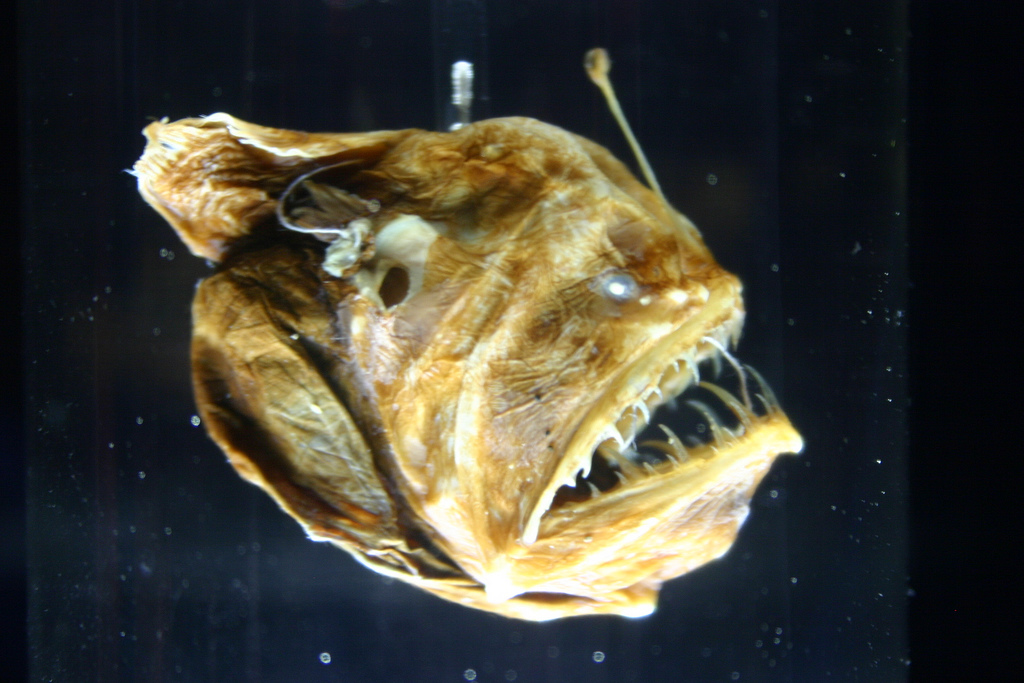 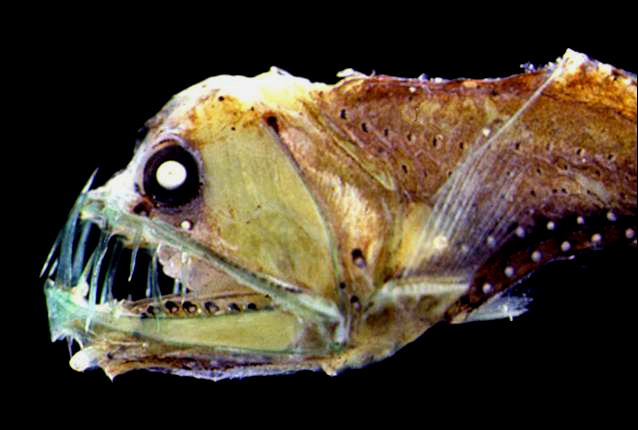 Over the course of 40 years, expeditions to the Titanic have noted the deterioration of the ship. 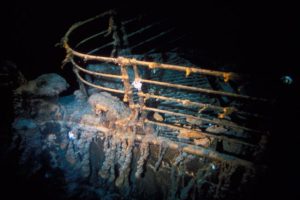 The point of the bow from the port side, taken by the remotely operated vehicle Jason Jr. (Courtesy Woods Hole Oceanographic Institution) 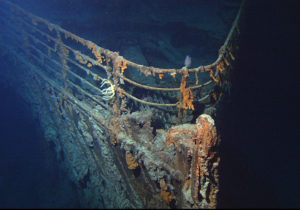 The bow from 2004 NOAA expedition. (National Oceanographic and Atmospheric Association) 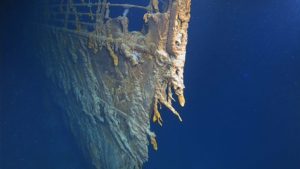 In 2005, it was observed during a photometric survey of the Titanic that many decks have collapsing walls, rotted out structure and vibrant growth of rusticle development. According to the David Bright and the rest of his team, the results of this analysis show that the bow of the RMS Titanic has been losing its structural integrity at a rapid rate and she is in danger of a total collapse.

In August 2019, a manned submersible reached the Titanic for the first time in 14 years. This expedition filmed 4K footage and performed photogrammetry passes on the wreck to create highly accurate 3D models of the ship. According to explorer Victor Vescovo, the wreck has become vulnerable from sweeping eddies and subjected to ever-changing sea currents. Salt corrosion, metal-eating bacteria and deep current action are having the greatest impact on the wreck. Parks Stephenson, a Titanic Historian who was on the expedition noted:

“The most shocking area of deterioration was the starboard side of the officer’s quarters, where the captain’s quarters were. Captain’s bathtub is a favourite image among the Titanic enthusiasts, and that’s now gone. That whole deck hole on that side is collapsing taking with it the staterooms, and the deterioration is going to continue advancing.”

The deterioration of the Titanic is a natural process. Although salinity plays a factor in the dissolving of metals, the Titanic is being dissolved by a microbe called Halomonas titanicae.  This bacteria, found in deep sea environments, eats wrought iron, forming rusticles, the rust icicle-like structures found on the Titanic. 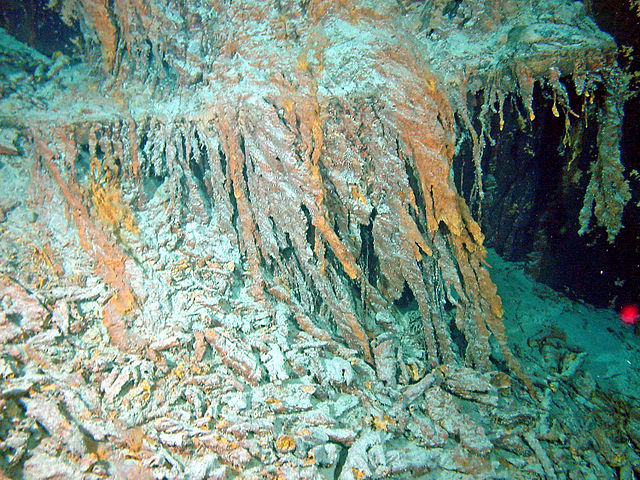 Detached rusticles below port side anchor indicating that the rusticles pass through a cycle of growth, maturation and then fall away. This particular “crop” probably was in a five to ten year cycle. (Lori Johnson.RMS Titanic Expedition 2003, NoAA-OE)

“In 1995, I was predicting that Titanic had another 30 years,” Henrietta Mann, one of the researchers who studied the bacteria, said. “But I think it’s deteriorating much faster than that now. Perhaps if we get another 15 to 20 years out of it, we’re doing good … eventually there will be nothing left but a rust stain.”

For more information about the 2019 expedition, check out “First Dive to Titanic in 14 years shows wreck is deteriorating” from BNO news. https://www.youtube.com/watch?v=O0vxWy2tN3U&feature=emb_logo

Atlantic Productions. “First Ever 4K Images Of RMS Titanic Show The State Of The Wreck On The First Manned Dive For 14 Years.” August 21, 2019. http://atlanticproductions.tv/news/first-ever-4k-images-rms-titanic-show-state-wreck-first-manned-dive-14-years/