How the Brown’s Spent Thanksgiving

Giving thanks for a special event, for home and for family has a long tradition in the cultures across the world, but the American idea and tradition of Thanksgiving Day for Margaret Brown’s family and for many of us has evolved from simple proclamations of thanksgiving to God to an event centered around the home, the family, football and food. 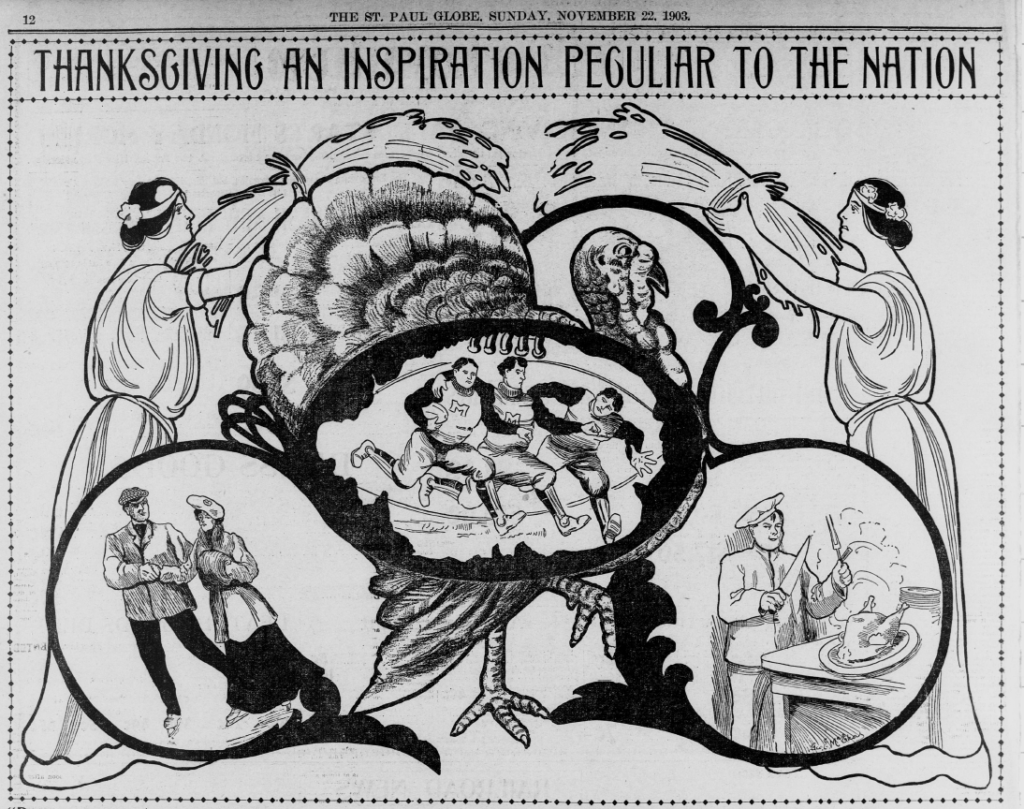 The first day of public thanksgiving and prayer was declared by President George Washington in 1789 and celebrated on Thursday, November 26th of that same year.. The day was to be spent “by acknowledging with grateful hearts the many signal favors of Almighty God especially by affording them an opportunity peaceably to establish a form of government for their safety and happiness.” After this proclamation, subsequent presidents declared different days as days of thanksgiving, with the exception of Thomas Jefferson. Jefferson had proclaimed a day of thanksgiving as governor of Virginia but didn’t believe that it was the place of the federal government to declare a day so tied with religion.

The focus of these days of thanksgiving was thanks to God, the family and the home. In 1863 and 1865, Abraham Lincoln’s Thanksgiving Proclamations were intertwined with patriotism. They were declared after decisive battles during the Civil War as a way to remind the people of the United States, not just the Union or Confederacy, that they were fighting to remain as one unified country. 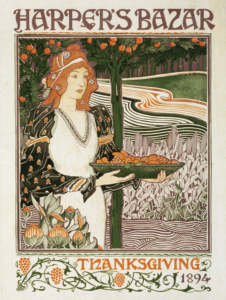 Growing up in Missouri, Margaret Tobin Brown would have celebrated a day of Thanksgiving on December 7th, as declared by the Governor of Missouri in 1865. In Colorado, Governor Steele appointed Thursday December 29th, 1859 as a day of Thanksgiving and Praise to the Supreme Ruler of the Universe for our preservation, prosperity and happiness in this newly discovered land of gold.

It is unclear what role football may have played in the life of the Browns, but in the 1890’s its popularity as a Thanksgiving tradition was growing across the nation. The tradition began  with college teams Yale and Princeton playing on Thanksgiving Day in 1876. The annual game moved to New York City the next year due to an increase in spectators and became immensely popular with over 40,000 spectators by the 1890s. This football game also included the tradition of a parade as supporters of teams would dress up and process down Fifth avenue in carriages and other vehicles decorated with their school’s colors. In the 1920’s, Thanksgiving parades sponsored by department stores in Detroit, New York and Philadelphia began.

Colorado Silver and Gold Football team (CU Buffs) had their first victory on Thanksgiving Day Nov. 26 1891 against the Colorado Springs Athletic Association Team and by 1893, 5000 Thanksgiving day games were held across the country at colleges, universities, high schools and local athletic clubs. In 1894, a newspaper article from the Denver paper, the Westside Citizen, discusses the tensions between churchgoers and football players on Thanksgiving Day including the dangerous nature of football:

“The tendency of late years toward making of Thanksgiving day a date for sporting events has not met with the approval of church people … A year ago the practice was vigorously denounced from many pulpits but more particularly on account of the large number of fatalities which resulted. Six persons lost their lives during the football games of last Thanksgiving.”

For the Browns, celebrations of Thanksgiving Day in Denver most likely centered on religion, home and the family. As devout Catholics, Margaret and her family likely attended mass on Thanksgiving day before holding a dinner in the dining room at their home. This dinner was usually held around 3pm as it was traditional to hold a large meal earlier in the day with a light supper following. Margaret and her family also would have followed the custom of giving gifts of food to those who were in need in the city as part of giving thanks for their wealth and security. 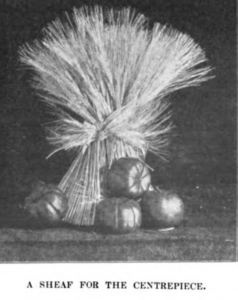 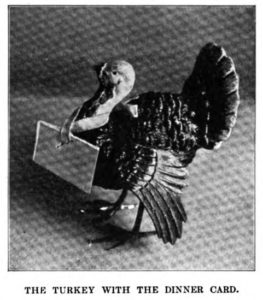 Thanksgiving traditions of decorations harkened back to the celebration of the First Thanksgiving or at least the ideal of what that feast represented. In 1911, the Shackman’s Favors Catalogue, a seller of paper goods in New York since 1898, featured traditional decorations such as turkeys, pumpkins including jack o’lanterns, and decorations that related to the pilgrims, such as pilgrim hats and buckles. Dark flowers like red chrysanthemums, sheaves of wheat, and Flint or Indian corn, also featured prominently in Thanksgiving decor as seen in magazines from the time period.. 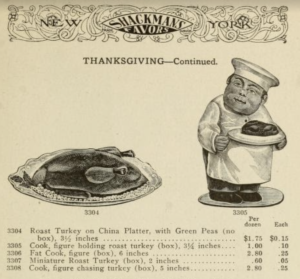 For Margaret, the food, that all important part of the celebration, would have combined the American traditions that have become synonymous with Thanksgiving, like turkey, with the elegance and course of Europe. For traditional foods, we can get a glimpse of a New England Thanksgiving in 1827 from Sarah Hale, editor of Godey’s Lady’s book and a large promoter of having one national thanksgiving day. In her book, Northwood: A Tale of New England, Sarah describes a Yankee thanksgiving feast as consisting of a roast turkey, sirloin of beef, leg of pork, joint of mutton, goose and ducklings, chicken pie, vegetables, gravy and the star of the show- a large pumpkin pie, the size of which represented the gratitude felt on that day.

In 1905, Fannie Farmer’s cookbook lists two menus for Thanksgiving dinner. The first menu is very similar to Sarah Hale’s New England style Thanksgiving, but Menu No. 2 shows the European elegance that many households aspired to in the 1900s. The menu is as follows:

A rest after that feast could not be blamed on tryptophan alone!  Happy Thanksgiving from the Molly Brown House Museum.