A Two Year Interlude: When the Governor of Colorado Lived at 1340 Pennsylvania Avenue

For our current exhibit, “Everyone but the Browns – Through the Years at 1340 Pennsylvania St,” we are revealing some of the untold stories about the other occupants of the house. We know that the Browns occupied the house fulltime from 1894-1910. After 1910, the Browns lived elsewhere across the country and traveled abroad, and when Margaret passed away in 1932, her children sold the Capitol Hill House. There was a short period of time during the early 1900’s when the house had other illustrious occupants. Governor James B. Orman and his wife, Nellie leased the house from the Browns from 1901-1903.

Born in Iowa in 1849 to farmers, James Bradly Orman and his brother, William, headed west to Denver in 1869 to make their fortune in the burgeoning railroad industry. Their construction company assisted in building parts of 9 different railway lines in various parts of the United States and Canada, including the Denver & Rio Grande Railway over the Continental Divide and the Florence & Cripple Creek Railway. No other man built more miles of railroad in Colorado than James Orman. 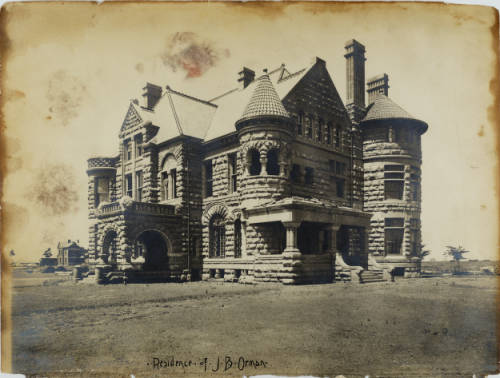 In 1876, James Orman married Nellie Martin in Pueblo, Colorado. The couple built their primary residence, now known as the Orman-Adams House, in 1890 on what would become known as Orman Ave.  William Lang, the same architect who had designed 1340 Pennsylvania Ave one year earlier, was also the architect of this property. While living in Pueblo, Orman was the president of the Pueblo Street Company, an elected member of the Colorado legislature, the mayor of Pueblo and also served in the US Senate for the unexpired term of Henry Teller.

Besides being known for his business and political acumen, Governor Orman was also recognized for his outgoing personality and admirable personal qualities. These qualities were also shared by his wife Nellie. Mrs. Orman was one of the leading ladies of Pueblo and Colorado, known for her social and philanthropic work. The Orman’s home in Pueblo became a social and civic center for community activities, including serving as a hostel for visiting celebrities.  Mr. and Mrs. Orman had a reputation for being “great entertainers.”

When Orman was elected governor of Colorado in 1901, he needed a residence in Denver and thus, the couple moved into their leased home at 1340 Pennsylvania Ave in May of 1901. It is possible that Governor Orman knew J.J. Brown personally as both men had mining claims in Leadville.  During this time, Margaret attended school at the Carnegie Institute in New York City and also embarked on an around the world tour with stops in India, Japan and Paris with J.J. 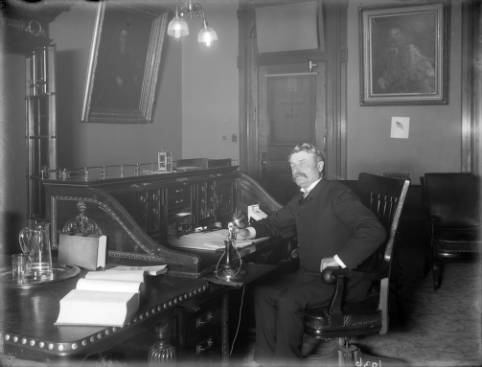 Aside from his office in the Capitol Building, it is likely that Governor Orman had a secondary office in 1340 Pennsylvania Ave. Telegraphic dispatches announcing the end of the labor strike in Telluride and the reopening of the Smuggler-Union mine were received by Governor Orman at the house in 1901.

Nellie Orman continued her love of entertaining when living at 1340 Pennsylvania Ave. According to one editorial in the Denver Times, she was “laughing her way into the hearts of everybody.”   Articles from the Denver Times and Entertainment Times also describe a luncheon for fifty guests held in the house on February 11, 1902 in honor of Mrs. Orman’s sister, Mrs. G. A. Stimson:

“When fifty women sit down at a table at one time it almost exceeds the bounds of what is usually known as a ‘luncheon’, but a luncheon it was called and so despite its size and elegance it must be designated. Two long tables the entire length of the library and dining room were spread beautifully decorated in pink.” 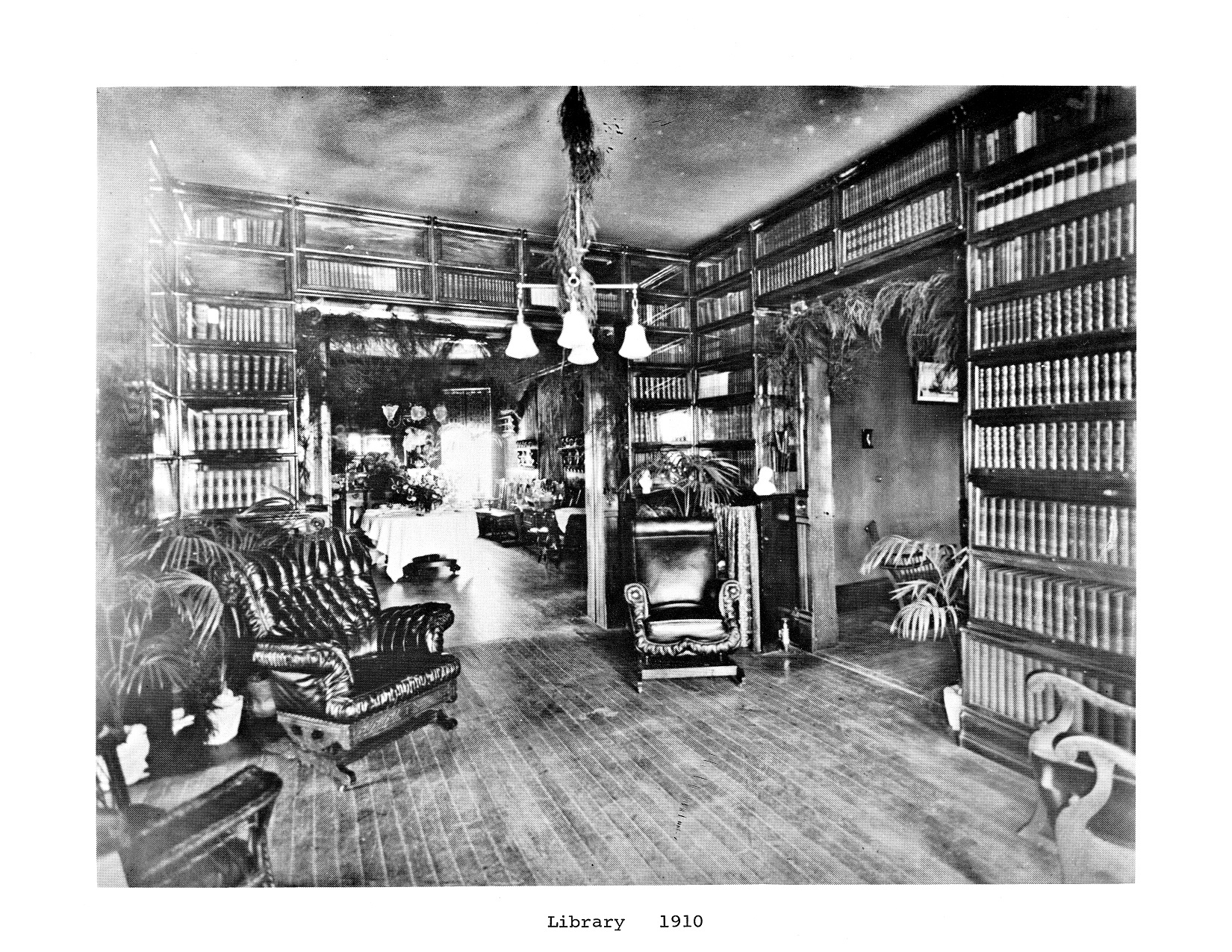 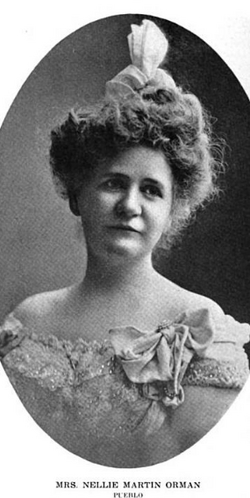 One of the features of the luncheon was a guessing game in which the guests were given clues as to the content of each of the eight courses served:  “As the third course was being prepared, a small dish was passed to the guests containing a little downy yellow chicken with its head tied up in a pink ribbon bag and though some wild things were suggested it was not long before the answer ‘smothered chicken’ was given amid great applause… a picture of an aged man driving a cab, as ‘cab-age’… a grape-fruit was guessed from a bunch of raisins. The fifth course caused any number of random conjecture and perfect shrieks of laughter, when two dainty toes from a jellied pig’s foot, with a piece of pretty mat laid between them was found to be to-mat-toes.”  Other courses included gumbo soup, smelts, sweet potatoes, coco, bell peppers, lemon-apple pig and tutti-frutti ice cream.

The editorials also particularly note the laughter of the guests and the vivacity of the hostess Mrs. Orman: “Throughout the luncheon, which was in progress from 1:30 until almost 6 o’clock the guests were kept in a continual gale of laughter by the novel and original entertainment, and the bright wit and sparkling repartee of the charming hostess Mrs. Orman.”  Prizes of a vase, a Venetian cup, and a cut-glass Vinaigrette were awarded to the first, second and third place winners, respectively.

It is likely that the house was let furnished as the article also mentions that one of the course clues, a little pig made of a lemon with a garland of apple peelings about his neck, was standing upon a handsome little Haviland china plate- the same china owned by the Browns.

According to the Times, the last entertainment that the Ormans gave at 1340 Pennsylvania Avenue was in December of 1902.  For this final party, the color scheme was green and white with the entire room was decorated in chrysanthemums. Governor Orman did not receive the nomination for the Democratic Party in 1902 and the couple moved back to Pueblo after the inauguration of James Peabody in 1903.

When the Browns reoccupied their home, according to the gossip newspaper written by Polly Pry, Margaret was displeased with the condition of the walls and the rugs in the house.  According to Polly Pry, Mrs. Orman retorted, “But you didn’t furnish cuspidors!”

This would not be the only time that there was a disagreement between Margaret and a renter of the house. At the end of their lease in 1918, Bessie Cosgriff believed that Margaret owed her money for “taxes and repairs.” Instead of making a payment, Margaret agreed to give Mrs. Cosgriff many of her furnishings in exchange for $3000, including the silverware and the floor-to-ceiling bookcases in the library. But the stories of what happened in the house during that lease are for another time.