A Lady Explorer, A Traveler in Skirts

“A lady explorer?  A traveler in skirts?
The notion’s just a trifle too seraphic:
Let them stay and mind the babies
Or hem our ragged shirts;
But they mustn’t, can’t and shan’t be geographic.”

Who was the Intrepid Woman Traveler?
By the 19th century, a new class of solo women travelers appeared in the United States and Europe. These women traveled not to accompany husbands but to please themselves, venturing beyond destinations considered safe and respectable.  A woman traveling alone was rare and it was necessary for her to be fearless, bold, daring and courageous–qualities a proper Victorian lady was forbidden to possess.

Despite this, women travelers were determined to see the world. These intrepid women were often intellectual, middle aged, widows or spinsters and free from family duties.  Traveling women also often suffered from ailing health when at home but blossomed in the freedom they found abroad.  Most wrote, some painted, observed, botanized, or collected as a way to share their all-encompassing passion.  By completing such work during their journeys, traveling women rationalized the abandonment of their domestic lives.

Independence and Opportunity
Victorian women were traditionally restricted to a narrow life based in the family home. Those who wanted to expand their role found it easier to do so when they were far from domestic and social obligations.  Traveling allowed women to test the limits of their capabilities.  Women who traveled were willing to endure the hardships of long journeys in order to feel free and alive.

The growing number of women travelers at the turn-of-the-century was linked to the increasingly vigorous movement for women’s equality.  By demonstrating that they could survive in foreign lands and endure rough conditions, traveling women were showing the world what women could do.

“I have really forgotten how many times I’ve crossed. But for years I’ve spent six months in Colorado and six months on the other side of the world. I’ve been through Europe many times of course, and in China, India and Africa. Everywhere I tried to study the life of the people and to become familiar with their customs. In China I was entertained often in native fashion and learned to eat with chops sticks.”

Margaret Brown was a privileged and passionate traveler.  Like other traveling women, she reveled in the freedoms that being abroad allowed.  Also like other traveling women, she was an avid collector, observer, writer and lecturer.  A description of her unpublished autobiography in the Denver Post in 1927 noted that her life was full of “trips to Europe, life in prewar Germany, the glamour of foreign courts, the romance of the Latin quarter in Paris” and that it was all related “in striking phraseology, possible only to one who has lived the life.”

Margaret Brown traveled throughout her life, but one of her most memorable trips was her 1901-1902 around-the-world tour with her husband J.J.  According to J.J.’s visa, the couple and one servant arrived in Tokyo, Japan in 1902.

Japan
In the late 1800s, Americans became fascinated with all things Japanese.  This was in part due to the fact that Japan had been closed off to the west beginning in 1639.  After opening for international trade in 1854, more and more Americans visited the far-east. They brought back porcelains, silk, notions of Buddhism, geishas and Samurai from this once secretive land.  The elite New Englanders of Newport, Rhode Island were so fascinated by Japan’s “strange customs and impeccable taste” they began thinking of themselves as Brahmin, the most elite of intellectual classes in the Buddhist religion. 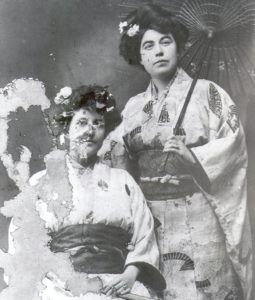 Most visitors to Japan traveled by rail to see the burial shrines of Nikko, the hillside temples of Kyoto and up to see views of Mount Fuji. Margaret kept mementos of all her trips in scrapbooks.  After their return it was apparent that both Margaret and J.J. loved the time they spent in Japan the most.

India
During their around-the-world trip, the Brown’s also visited India, a place Margaret returned on her own.  At the turn of the 20th century, India was a popular destination for world travelers.  As part of the British Empire, it was well established with extensive rail systems, palatial hotels and offered fine dining on exotic dishes such as curried quail, sweet meats and pomegranates. Visitors were also exposed to elephant riding, opium dens, glorious temples, and tea plantations.

After her return from the world tour, Margaret wrote a lengthy article for a Denver about life in India.  She described being enthralled by the temples but deeply disturbed by the caste system.  A system that relegated men and women to outcast status upset Margaret, who dedicated much of her time to fighting for equal rights for all.  In her eyes, India was “in a greater state of degradation than any other in the world.”

In 1909, after J.J. and Margaret legally separated, Margaret began to take her passion for travel to a new level.  She learned to yodel in Germany, dined in St. Petersburg, Russia and attended the coronation of King George V at Westminster Abbey in London.  She also traveled to Cuba, Hawaii, Bermuda, and South America and was caught in a typhoon in the Indian Ocean. 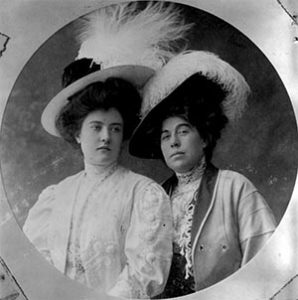 EGYPT
In 191, John Jacob Astor IV and his young bride Madeline invited Margaret to join a group traveling through northern Africa and Egypt.  Ready for more adventure, she happily accepted the offer.

Most travelers to Egypt planned a two to three month tour.  First journeying by sea to the port of Alexandria, they then boarded a train to Cairo. From Cairo, visitors could take boat tours up the Nile to Aswan and sometimes into Nubia. During her visit, Margaret had a beautiful hand-woven Egyptian silver train made.  Unfortunately, it was lost on her return trip on the Titanic.

Like other women travelers, Margaret wrote and lectured about her travel experiences.  In 1914, she began a nationwide lecture tour.  She had hundreds of slides and gained the reputation of being a very compelling and colorful speaker.

Like her peers, Margaret Brown was an avid collector.  In 1910, the Denver Republican noted, “When she goes away for a trip and sees all sorts of wonderful sights and curiosities she thinks of hundreds of people in her home town who are less fortunate than she and have no chance to travel and become acquainted with other countries.  With this in mind she has started to collect curios of different sorts for the Museum at City Park [now the Denver Museum of Nature and Science]. There arrived yesterday several wonderful things she purchased during her recent visit to South America.  The most interesting specimens are two alligators, which are beautifully mounted and will be a great addition to the museum.”