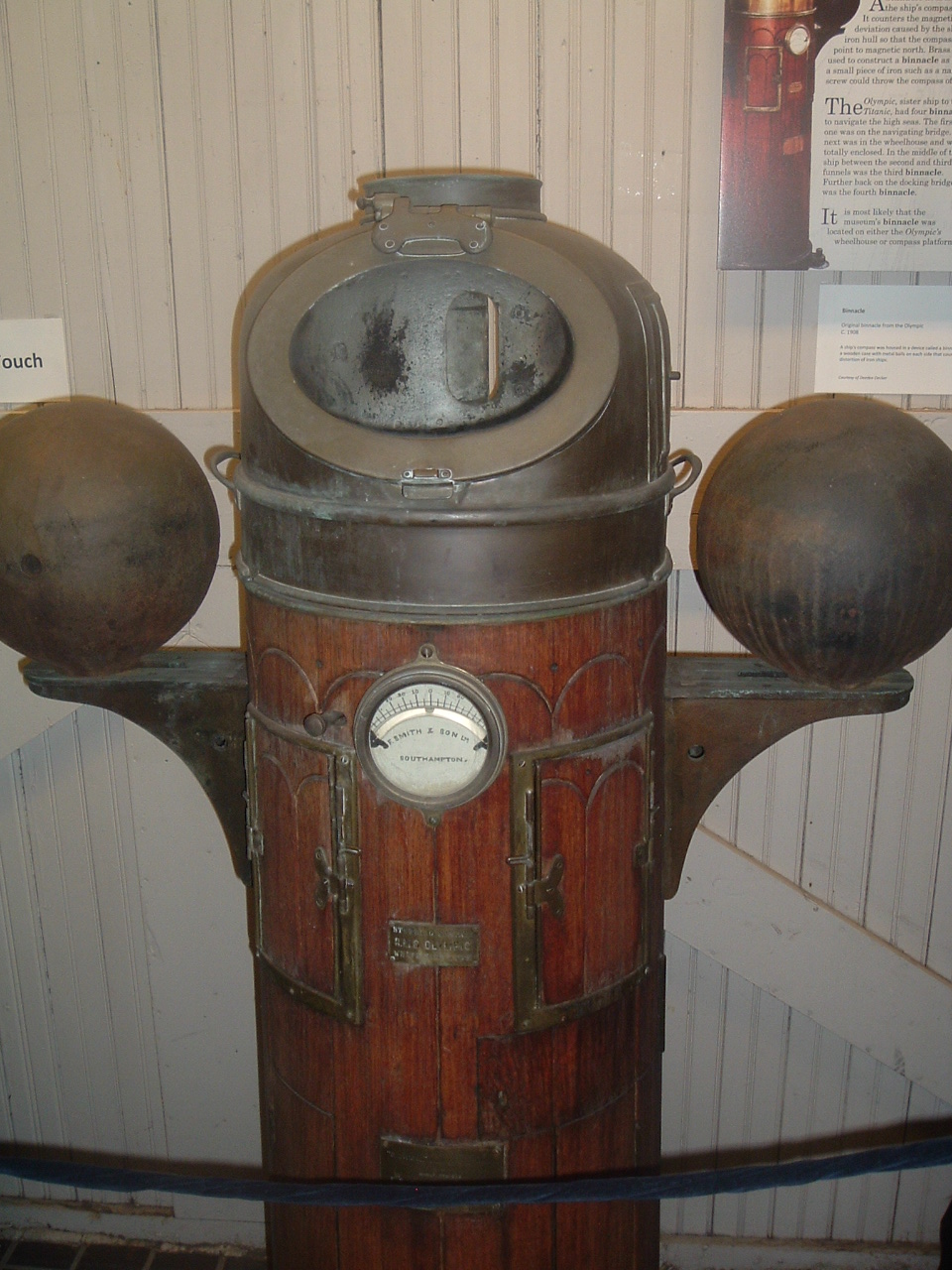 A binnacle is the housing for a ship’s compass.  The idea behind a binnacle is to counter the magnetic deviation caused by the ship being made of iron so that the compass can point to magnetic north.  Metals that were used to construct binnacles were required to be non-ferrous (containing no iron) such as brass.  Even a small piece of iron such as a nail or screw could throw the compass off.

The Olympic, sister ship to the Titanic, utilized four different binnacles to assist in navigating the high seas. The first one was on the navigating bridge.  It was covered but the sides of the bridge were open so it was exposed to the outside elements.  The next one was in the wheelhouse and was totally enclosed.  In the middle of the ship between the second and third funnels on the compass platform was the third binnacle.  Further back on the docking bridge was the fourth binnacle.  The binnacles in these last two locations were completely exposed to the elements so they would be covered when not in operation. It is quite possible that this particular binnacle was located on either the Olympic’s wheelhouse or compass platform.

Olympic’s binnacle stands 56.5” tall, 48” in circumference, and is 38” wide.  It measures in at 31.5” in circumference and is mounted on 9” slotted supports.   The top of the binnacle has a brass hood.  This was used to protect the compass and cut down the amount of light at night so that anyone working around it would not lose their night vision.  The hood also has two access sliding doors; one is on the back side and the other is on the right side. Upon removing the hood the compass is then exposed.  The compass is mounted in a gimbal which is best described as a gyroscope, a spinning wheel or disk whose axle is free to take any orientation.   The gimbal keeps the compass horizontal or level.  The compass would have been illuminated by an electric light that was housed inside the binnacle, below the compass.

On the front of the binnacle is a clinometer which is filled with liquid and is used to give the list (angle) of the ship up to 50 degrees. The clinometer must be mounted on the center line of the ship in order to work properly.   The binnacle also has a door on both sides of the clinometer and the middle plaque.  This is where the electric light bulb would have been accessed.   There are two doors on either side of the of the bottom plaque which are used for magnets and flinders bars (used to counteract the vertical magnetism) to help eliminate the magnetic deviation of a compass caused by an iron ship.  On the back side of the binnacle there is a flinders tube.  This one is 24.75” long and 3.5” in diameter and was used to hold flinders bars.