Restoration of the Stained Glass at the Molly Brown House Museum 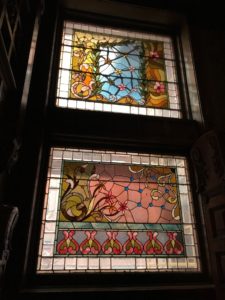 Stained glass, prior to restoration

Like many historical houses, the Molly Brown House Museum has restored many aspects of the home to its original beauty. In 2018, Phil and Jane Watkins, of Watkins Stained Glass, restored the original stained glass on the north façade of the house. As noted in a previous blog post, the stained glass on the north façade is believed to be originally completed by

Watkins Stained Glass. Although no documented evidence has been found, Phil and Jane Watkins have always been told that Watkins Stained Glass manufactured the original stained glass windows on the landing on the north façade. After inspecting the windows closely during the restoration process, Phil is very certain that these windows were his family’s work. Phil believes the craftsmanship and details, such as the efficient soldering technique and the types and colors of glass, appear to be the work of his great grandfather, Clarence “Charles” Watkins.

At the beginning of the restoration, when removing the stained glass from the house, a hand written note in pencil was found on the side of the wooden window frame. The museum staff could not make out the first word in the note, however the phrase “Large Job Plate” is legible. The Watkins are not sure whether “large job” indicates a big job, or the first owners of 1340 Pennsylvania, Isaac and Mary Large. Phil Watkins explained to the museum staff that Watkins Stained Glass used to work with Plate Glass Company in Denver, and he hypothesized whether “plate” refers to this company. The Watkins were unsure if the stained glass windows were originally made for the Large family, or later for the Browns. According to Phil Watkins, there is a chance that when the house was first built, the windows on the landing were plain plate glass and the stained glass came later. We can see the stained glass windows clearly in photographs from 1910, but their history prior to 1910 remains unclear. 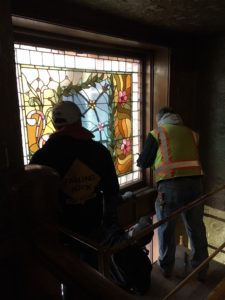 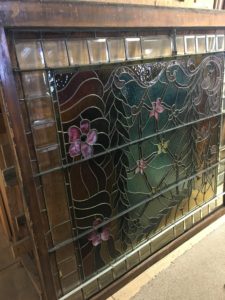 Top panel in the Watkins Studio

Continuing in the restoration process, Phil Watkins informed the museum that the stained glass were made of American Glass and that the lead was originally bronzed, or coated in a varnish mixed with metallic flakes. However, during the restoration, it was unclear if the flakes used were real gold. Regardless, the gold aspects within the lead would have made the windows sparkle enormously. Phil also made note of the purple glass used in the windows, explaining it is extraordinary due to that particular purple color being no longer available. There are also blue cut glass jewels in the windows, which are also very rare because they were cut by hand during the original manufacturing process.

Once Phil took the stained glass out of the window frame, he cleaned the glass. To clean the windows, Phil used dish soap that would not leave behind harmful residues. Next, Phil used gravity to reform the glass. He turned the windows upside down, allowing them to unbuckle and loosen, and then laying them flat on his work area. This allows the glass and lead work to relax and move back closer to its original configuration. Following that step, Phil then slowly removed old cement by chipping away the cement that held everything together. Once he completed removing the cement, he stabilized every piece with a reversible adhesive that would not present any permanent changes or damage original materials. 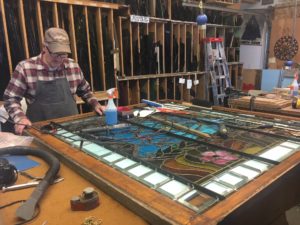 In March of 2018, Watkins Stained Glass completed and installed the restored stained glass on the north façade of the Molly Brown House Museum. The total restoration time was roughly three months. The restoration of the stained glass windows not only ensures conservation of the windows, but it also protects the rest of the house by providing a tighter seal against weather and a thermal layer for UV and light protection. This work is part of a larger project to rehabilitate many of the house’s historic window casings and install storm windows that will block out harmful light radiation, which could endanger the Brown family’s house and their belongings. 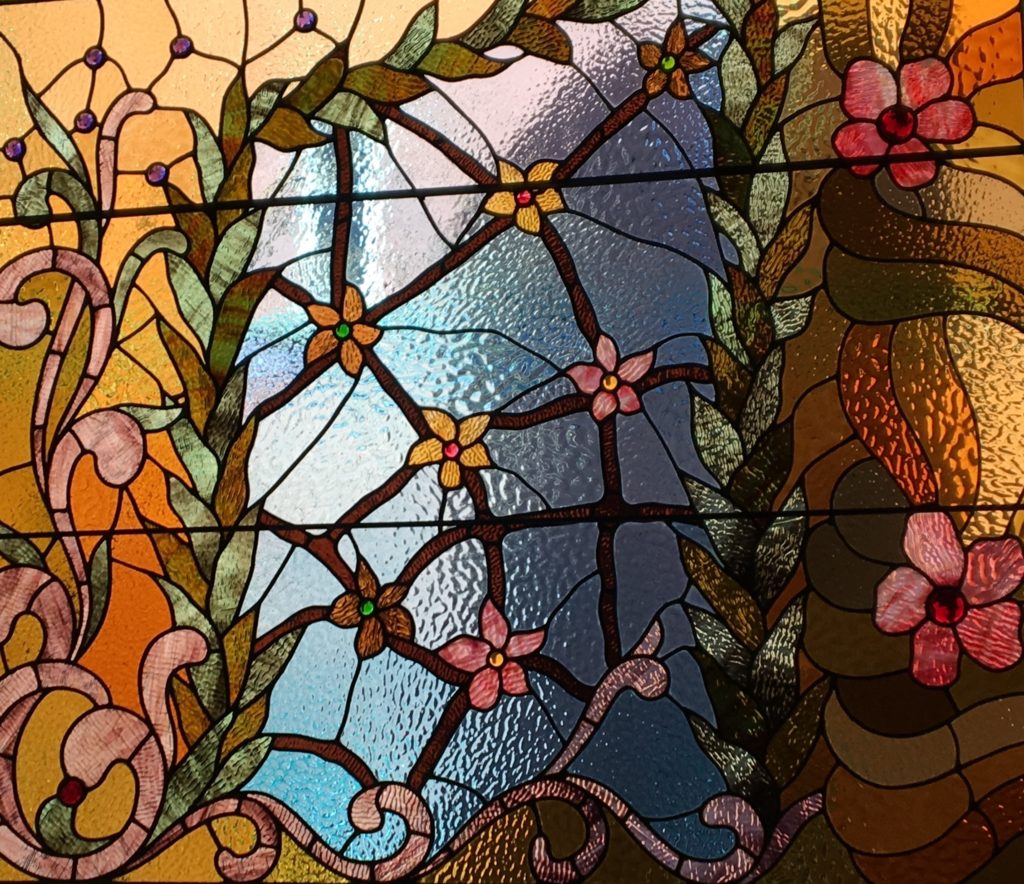 To view the stained glass works completed by Watkins Stained Glass, check out their website at http://watkinsstainedglass.com