Ringing in the New Year is a time generally celebrated with laughter and togetherness, dancing, and the generous application of strong liquid refreshment. One may wonder, therefore, if the Prohibition era of 1920-1933 had a negative effect on this tradition of enthusiastic merriment. Luckily, the party-loving youth of the roaring 20’s, known for their excess and living life to the extreme, didn’t let a little thing like Prohibition take away from their good times, they just became more creative.

The 1920s saw a dramatic rise in the number of establishments known as speakeasies, a term coined in the early to mid-19th century to describe the hushed tones 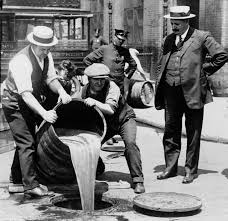 needed when talking about a place where illegal alcohol was sold, lest the speaker attract the attention of the police or neighbors. These bars thrived despite frequent police raids and the rise of organized crime (who often supplied the illegal moonshine).

The speakeasy could be as simple as a private party in the back room of a house, or as elaborate as New York’s “21” Club, which had a system in which a lookout at the door would signal the bar if police were sited and the barkeep would activate a mechanism that completely hid the bar, making the room look like a simple dining or gathering room. Some were also known as ‘blind tiger’ or ‘blind pig,’ indicating one way to circumvent the law, which was by charging admission to some special exhibit, often a look at an exotic or otherwise special animal, and providing a complementary cocktail to the patron.

Cocktails themselves transitioned from the classic drinks of the 19th century which emphasized the taste of the finely made liquor, to new inventions meant to mask the taste of badly crafted moonshine. A few popular options were the Sidecar, French 75 and the Bee’s Knees.

The Speakeasy was also a segway into integration with patrons from all walks of life, all classes and races mingling together. 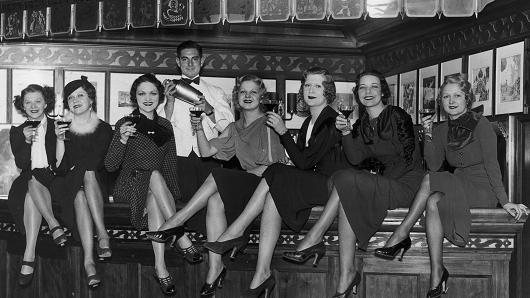 It was also a prime locale for the modern woman to show off her independence with the number of women publicly drinking as a means of entertainment spiking sharply until they nearly outnumbered the men.

While the modern New Year’s celebration lacks some of the excitement of illegal drinking, Roaring 20’s themed celebrations abound to bring back the feel of the era. Alternately, a home speakeasy party can also be festive with themed drinks.

Add honey, lemon, and orange juice to that hidden flask of bathtub gin

Turn your New Year’s Party into a 1920s speakeasy.