Pieces of Our Past: 40 Years at the Molly Brown House Museum

When the home was sold after Margaret’s death in 1932, it was converted from a single family residence to a boarding home.  The interior of the house experienced many changes such as the addition of bathrooms and kitchens, installation of coved ceilings to decrease the cost of heat, and the elimination of the back staircase.  In 1970, a group of concerned citizens organized and created a private non-profit Historic Denver, Inc. to save the home from the possibility of destruction.  Once Historic Denver owned the property restoration began through paint analysis, architectural investigation and with the help of photographs taken by Margaret in 1910, the home of the Unsinkable Molly Brown was returned to its original splendor. 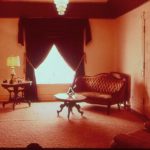 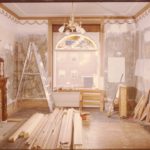 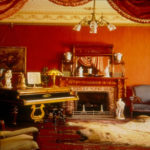 The parlor is the best examples of removing a layer and discovering a piece of the original décor.  Prior to the restoration of the parlor, a plaster cove had been added to the ceiling, when this was removed a portion of the historic decorative cornice was intact and able to be reproduced.  Also, when the non-historic plaster ceiling cove and plaster door openings were removed in 1973, the original woodwork was unveiled, and was refinished.  On the north end of the staircase on the second floor a wall and door existed that was not historic and was removed in 1980.  Above the framing of the wall original anaglypta was found, which was reproduced as the décor for the hallway.  Sponge painting, currently reproduced in the hallway, was found when the door jamb of the door was removed for examination.   Although the post-historic construction covered up the craftsmanship of the original builders of the home it also helped to preserve what was underneath, a great asset for the restoration team.

Our summer exhibit explores the restoration work completed throughout the house, to help visitors appreciate the original nature of the home.  It will be on display in the museum’s exhibit area until October 4th, so be sure to come and see it during its last six weeks.