Over the course of his life, Lawrence Palmer “Larry” Brown was expelled from school, married and divorced his first wife twice, survived a gas attack in World War I, worked in the film industry and married a Hollywood star. Striving to emerge from the shadows cast by his famous parents, Larry succeeded in blazing his own winding trail through the world.

Larry was born in Margaret’s hometown of Hannibal, Missouri on August 30, 1887. When the family moved from Leadville to Denver in 1894 Larry and his sister Helen attended Sacred Heart College, a prestigious Catholic school. His parents then sent him to 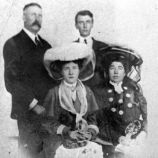 The Brown Family: 1906, Last International Trip as a Family.  Sailed on the Lusitania during its maiden year on the Atlantic.

the Phillips Exeter Academy, a prep school in Pennsylvania. J.J. and Margaret hoped he would attend Yale, while Larry wanted to go to the Colorado School of Mines, one of the top mining schools in the country.

Both sets of plans were disrupted when several of Larry’s traveling companions “went on a spree” during the journey back to school after Christmas. The entire group was eventually expelled. When Larry returned to Denver and informed his father, the two got into an altercation that resulted in Larry spending a night in jail. Larry expressed remorse, telling a reporter “My, but I regret this affair. I can hardly think of facing mother. I am very fond of her and sis, and they will suffer the most for what has occurred” (Iversen, 157).

Larry compounded his father’s disappointment when, rather than return to school, he decided to marry Eileen Horton, a Kansas City socialite. While Margaret was fond of Eileen, both she and J.J. thought Larry should wait and establish himself before starting a family. When Larry and Eileen were married in Kansas City on January 11, 1911 neither J.J. nor Margaret attended the ceremony. Angered by his son’s disobedience, J.J. cut Larry off from the family fortune.

After a honeymoon in Leadville, Larry and Eileen moved to Victor, Colorado, where he took a job as a day miner. Their son Lawrence Palmer, Jr., called “Pat,” was born in November 1911. Always eager for a sensational story, the Denver press characterized the family’s situation with the headline “Rich Man’s Son Toils in Mine to Feed Wife and Baby.” Eileen hoped Larry would give up mining for his health and safety, and with her encouragement he began to take correspondence courses. Meanwhile J.J., impressed with Larry’s efforts to make his own way in life, began sending small installments from his trust fund. Larry still struggled to find a steady career, and the family moved frequently. The couple had their second child, Eileen Elizabeth “Betty” Brown, in 1913 in California. By 1915 however, the strain of constant moves and uncertain employment led Eileen and Larry to divorce. Larry returned to Colorado and finally enrolled at the School of Mines.

When the United States entered World War I in 1917, Larry decided to enlist, and quickly 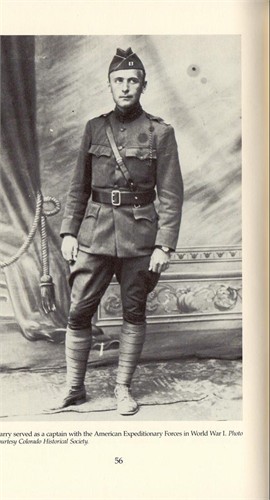 Larry Brown in World War I

found he was well suited to military life. While training at Fort Sheridan he “attracted attention for his competency in military manners and enthusiasm” (Iversen, 213). He became a captain with the 117th Infantry and was sent to France with the American Expeditionary Force. Just before he departed for Europe, he and Eileen remarried.

While serving in France, Larry retained his enthusiasm for the army, but also experienced the deprivations of war. “I am working harder than I ever did in my life, and at that I am enjoying it all more than I have ever enjoyed anything,” he wrote his mother from the battlefields of Ypres in August 1918. Yet he also admitted “I become intensely lonely at times” (Iversen, 214). A month later, while fighting at the German fortifications of the Hindenburg line, Larry was hit with mustard gas. He managed to recover after two months at the hospital, but his active duty career had ended. He was decorated for his role in breaking the Hindenburg line, and was honorably discharged in January 1919.

When J.J. died in 1922, a lengthy and contentious court case arose between Margaret and her two children over how the estate was to be distributed. A settlement in 1926 finally placed $100,000 in trust for Margaret and another $100,000 for the children. Shortly thereafter, Larry and Eileen divorced a second time.

Larry found his way back out to California, where he worked for John Gorman Pictures studio as a general manager in the silent film industry. He met the Hollywood actress Mildred Gregory, and the two were married on November 17, 1926 in Beverly Hills.

Though his relationship with his mother had soured after the estate dispute, when Margaret died in 1932 Larry asked that the funeral be postponed so he could attend. After moving back to Leadville in 1935, he joined the board of the Leadville Historical Association, and eventually became the Director of the Colorado Mining Association. Throughout his later years he tried to prevent the distortions of his mother’s image created by Hollywood and the press but was largely unsuccessful. In 1949 Larry succumbed to pneumonia and passed away at the age of 61. He left a collection of family materials to the Colorado Historical Society, with the condition that they not be opened for 25 years. When the collection was finally opened and sorted in 1978, it provided a more accurate picture of Margaret and the rest of the Brown family, helping Larry achieve his goal of repairing the family’s legacy years after his death.