Helen Churchill Candee: How Women May Earn a Living

While Margaret Brown has become legendary for her progressive ideas regarding a multitude of issues and causes, she had numerous contemporaries who also pushed for change and social progress during their time. In fact, one such prominent social critic, and early feminist, was also a passenger onboard the Titanic in 1912, and as faith would have it even survived the infamous disaster by escaping onboard lifeboat six, the same lifeboat Margaret famously rallied. Who was this woman of the progressive era whose life echoed Margaret Browns so similarly? Helen Churchill Candee, who in her own right lived an amazing life just like Margaret Brown.

Although not as well known today as other Titanic survivors, Helen Churchill Candee was quite prominent during the early 20th century, known for her work writing travel pieces describing her lavish adventures throughout the world, and fiction books, and perhaps most significantly feminist writings. Like Margaret Brown, Helen Churchill Candee had some pretty radical and trailblazing beliefs when it came to women’s right and their place in society.

These beliefs cumulated into action in 1900 when Churchill Candee published one of the earliest pieces of American (and perhaps international) feminist literature; How Women May Earn a Living, a 342 page tome advocating for women to seek financial and social independence from men and others who sought to control them. These beliefs were very progressive in 1900, as only recently with the advent of mass manufacturing and the later stages of the Industrial Revolution had women been allowed and able to seek a variety of factory jobs. Before the period, the fortunate few women who had been allowed to work were well educated and were relegated to positions, as teachers, boarders, and an even smaller group were artists. Helen Churchill Candee had been supporting herself and two children for over twenty years, and believed that all women had that right whether it stemmed from want or necessity.

Due to these beliefs and her other writings, Helen Churchill Candee was well known aboard the Titanic. Like Margaret she travelled alone and in first class. Also like Margaret it was because of her notoriety that on the night the great ship struck the iceberg she was forcibly taken by two crewmen and thrown onto a lifeboat, she did not escape unscathed though, as a result of her long fall from the ship she hurt both her legs and suffered the six hours aboard lifeboat six while desperately awaiting rescue from the Carpathia. Also similarly to Margaret, Helen too cared deeply about the less fortunate. So much so that, again like Margaret, Helen sought to go back into the wreckage to look for survivors. Quartermaster Robert Hichens, much to the two fiery women’s dismay, rebuffed both of them.

Aside from both sailing on the doomed vessel, the two women had even deeper similarities. While Helen Churchill Candee’s undeniable passion was advocating for women’s labor rights and financial independence, she like Margaret, also believed in the necessity of philanthropic efforts. So much so that she devoted an entire chapter to the pursuit of charitable careers in her famous book. She regarded working for America’s less fortunate as a noble cause. Saying the following on the matter, “The joy in working among them is in discovering the individuality of each character, the nobility of some, the ambitions of others, and the kindliness of almost all.” Margaret Brown almost certainly agreed with Helen’s sentiments.

Helen Churchill Candee, like Margaret, went on to live a full and progressive life after the disaster. Writing about her experience and granting interviews on the issue. But simply surviving her ordeal would not be Helen’s only legacy. She continued to thrive and push for equality. She went on to ride her horse down Pennsylvania Avenue advocating for women’s voting rights in 1913, served as a nurse in the Red Cross in Italy during World War One, and even was a founding member of the Society of Woman Geographers. Helen, the great kindred spirit of Margaret Brown finally passed away in 1949 after seeing huge gains in women’s independence and equality, gains that had undeniably had been spurred on by women like her and Margaret Brown. 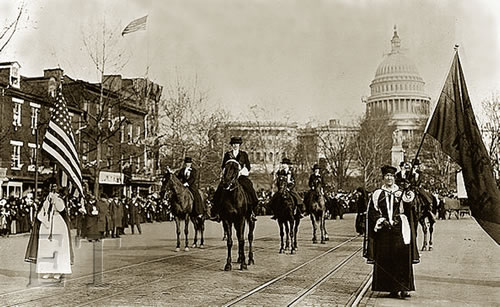