Halloween, or some iteration of the holiday we celebrate today, has existed for approximately 2,500 years.  Our celebration stems mainly from Irish immigrants and the Victorian era. In that tradition, the Molly Brown House Museum observes the Victorian enthusiasm for Halloween through authentic decorations showcased in Ladies Home Journals of the time.  Halloween decorations, which can be enjoyed from October 4th through the 31st, help to recreate the feel of Halloween at the Brown family home.

Originally Halloween was celebrated on October 31st to correspond with the Celtic calendar and the Celtic festival of Samhain also called Summer’s End festival which celebrated the last harvest.  Celts incorporated symbols from their agricultural based society including fall harvest colors, corn, pumpkins, and carved potatoes.  Wicca women, or the wise women of the village and symbols of death representing the end of the harvest were also important symbols of the festival.  The Celts wore costumes made of animal pelts and feasted on the fruits of the harvest during the celebration.  The Celtic festival eventually began to include aspects of Germanic, Roman and British harvest celebrations.  When the Christian Church incorporated the pagan rituals November 1st became All Saints Day and October 31st was All Hollow’s Eve, a night reserved for prayer.

A distinct version of Halloween was created in America as various beliefs and customs of European ethnic groups and Native Americans blended.  A large influx of new European immigrants in the middle of the 19th century added their traditions to Halloween.  Especially the millions of Irish immigrants fleeing Ireland’s potato famine of 1846, brought more traditions and greater popularity to the holiday in America.  The Victorians love of décor and disguises continued to popularize the customs of Halloween and created the celebration that we know today. 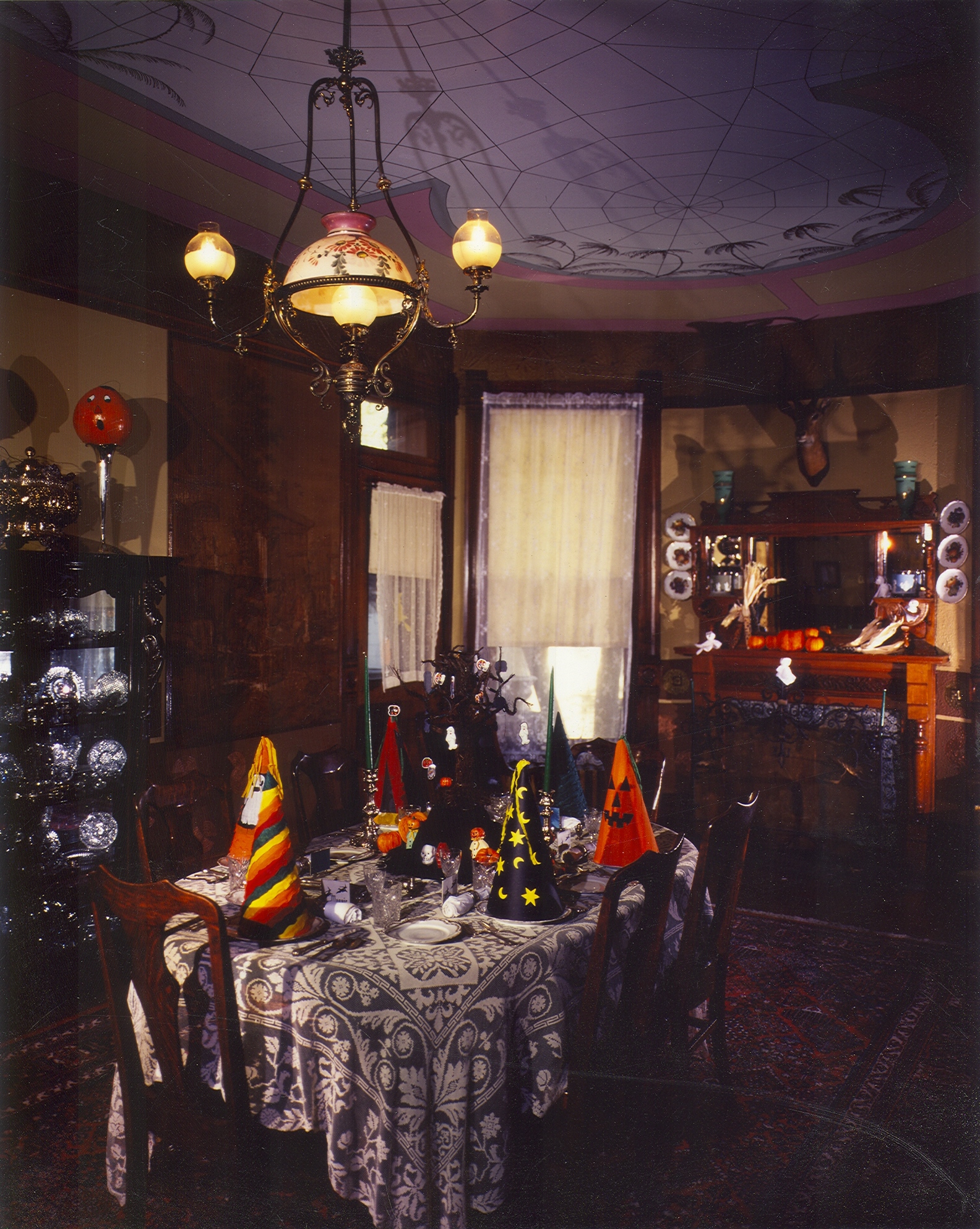 Halloween during the Victorian Era consisted of elaborate parties for young people.  Popular women’s magazines featured articles on throwing the best party and creating elaborate decorations.  Unlike Christmas, Halloween was

a time to keep parties informal and fun.  Children wore crepe paper costumes, masks, and party hats.  Decorations within the home included corn stalks, jack o’lanterns, gourds, crepe paper streamers, and paper witches and ghosts.  Typical party food included doughnuts, popcorn balls, apples, nuts, candied fruit, ice cream and cakes.  Common games involved fortune telling and predictions about love.  One game called “Hazelnut Game” was played by writing the names of suitors on a hazelnut shell and tossing it into the fire.  Once the nut cracked due to heat it was analyzed to determine the fate of the couple’s relationship.  The nut that spoiled and cracked meant that the couple was in for a turbulent relationship and if one burned evenly symbolized undying passion.  Another game, “Fortune Ball” was played by passing a ball of twine which had trinkets twisted into it.  As the ball was passed it was unwound and the trinkets you received determined your fate.  For example, if you received a thimble you were destined to be a spinster, a dime meant wealth and a ring was a sign of a marriage proposal.  In order for the party to be considered a success it needed mystery and surprise.

Today most children go “trick or treating” which was not officially started in the United States until the 1920s.  This custom can be traced to beggars asking for food when there was plenty to go around during the harvest celebration.  Later, the tradition became a courting ritual, allowing young men to visit women in their homes and bring treats for the other children in the household.  The couple was then encouraged to visit neighbors which allowed for them to have more time together.  In America, trick or treating began in the north-eastern part of the country and had different roots.  Children saw Halloween as a time to behave mischievously.  The act of giving bribes to stop children from soaping windows and toilet papering trees started the tradition of giving candy.  Halloween is now when the most candy is sold in the United States.  The expression “trick or treat” became the Halloween greeting during the late 1930-1940s.

During the Victorian Era, the celebration of Halloween took hold in America and many of today’s customs were developed.  Today we find that while costumes and decoration are different than those in Molly Brown’s time, the mystery and surprise of Halloween is a sentiment we still celebrate.