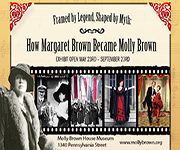 This summer, the Molly Brown House Museum will be presenting a much awaited for exhibit that takes an in-depth look at how the myth of Molly Brown was created. So much of what we think we know about Margaret Brown comes from the larger-than-life stories that were created after her death. Those stories in turn became the basis for a Broadway musical then the Hollywood motion picture of the same name, The Unsinkable Molly Brown.

After Margaret’s death in 1932, both the Denver Post and the Rocky Mountain News published her obituary with false stories of her life. These obituaries were then later used in the first erroneous biographies written about Margaret; Gene Fowler’s, Timberline, published in 1933, and Caroline Bancroft’s, The Unsinkable Mrs. Brown, published in 1963. However, books and obituaries weren’t the only sources helping to create the myth of Molly Brown. Many myths began during Margaret’s lifetime as some accounts even insinuate that Margaret herself was responsible for some of the myth telling and perpetuation. Margaret had even stated that “I’d rather that the papers say something about me than nothing at all.” So the myth was born….

Today, people who have not paid a visit to the Molly Brown House Museum know the character of Molly Brown from the Broadway and Hollywood musical. However, both Broadway and Hollywood did nothing at all to help clear the air of who Margaret Brown really was. They did however share her story with a younger generation, making the world fall in love with her all over again.

Join us as we explore the changing cultural landscapes that helped to shape the 1960s, The Unsinkable Molly Brown musical through an exploration of original artifacts and clothing worn by the real Margaret Brown and original Hollywood movie memorabilia from the Debbie Reynolds Collection.