As the Great War came to a close, Margaret would surely have empathized with the lost generation of young people who had experienced the destruction of the world as it had been known up to that point. She had worked diligently with the American Committee for Devastated France helping wounded French and American soldiers to find hope and new meaning in a new era. If there is any season best suited to this task, Christmas time is it. The holiday is dedicated to renewal and hope, lending itself perfectly to the extravagance that would take root in the 1920s.

Following the war, a period of economic growth began in the United States and Christmas celebrations, which had been evolving since the mid nineteenth

century, would solidify into what we know today. Extravagant Christmas trees, sending holiday cards, holiday lights, extensive gift giving, lavish feasts, and the wide spread use of Santa Claus images in advertising would all be solidified by the mid-1920s.

ations. Families that previously would not have been able to splurge on holiday gifts were now encouraged to buy the latest and greatest gadgets for loved ones

. Popular items included radios,model train sets, and Kodak cameras. The use of Santa Claus in advertisements also became widely popular during this time as a universal figure businesses could use at little advertising expense.

One innovation that became popular during this era was the artificial tree. Feather trees became widely used, especially in the UK. These were trees with green-dyed goose feathers arranged into pine needles and attached to wire branches. These branch arrangements were then attached to a central dowel for a trunk. Department stores sold these modern 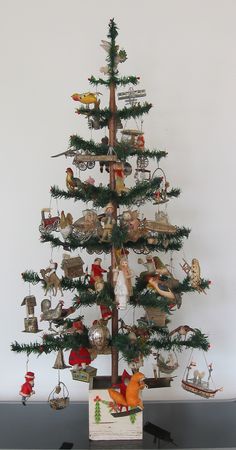 decorative trees in a range of color and size options, including trees anywhere from two to 98 inches tall.

Perhaps the most notable trend to emerge during the 20s was that of electric lights for the tree. Prior to this period, candles were still widely used to light the Christmas tree. Although these lights would not be extensively used in average households until 1930, the 20s saw increased use not only in households but by big businesses in their holiday displays. Urban migration was in full swing thanks in part to wide-spread use of automobiles, and businesses had to catch the attention of patrons amid the hustle and bustle of the Roaring 20s. 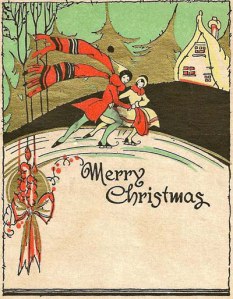