At the Molly Brown House Museum we are decorated for Christmas and looking forward to fun events such as our Candlelight tours, Christmas Teas, and docent-led tours of the home.  To get everyone in the holiday spirit here is some interesting information on the roots of Christmas, especially in relation to Victorian traditions.  We hope you enjoy learning more about Christmas Past. 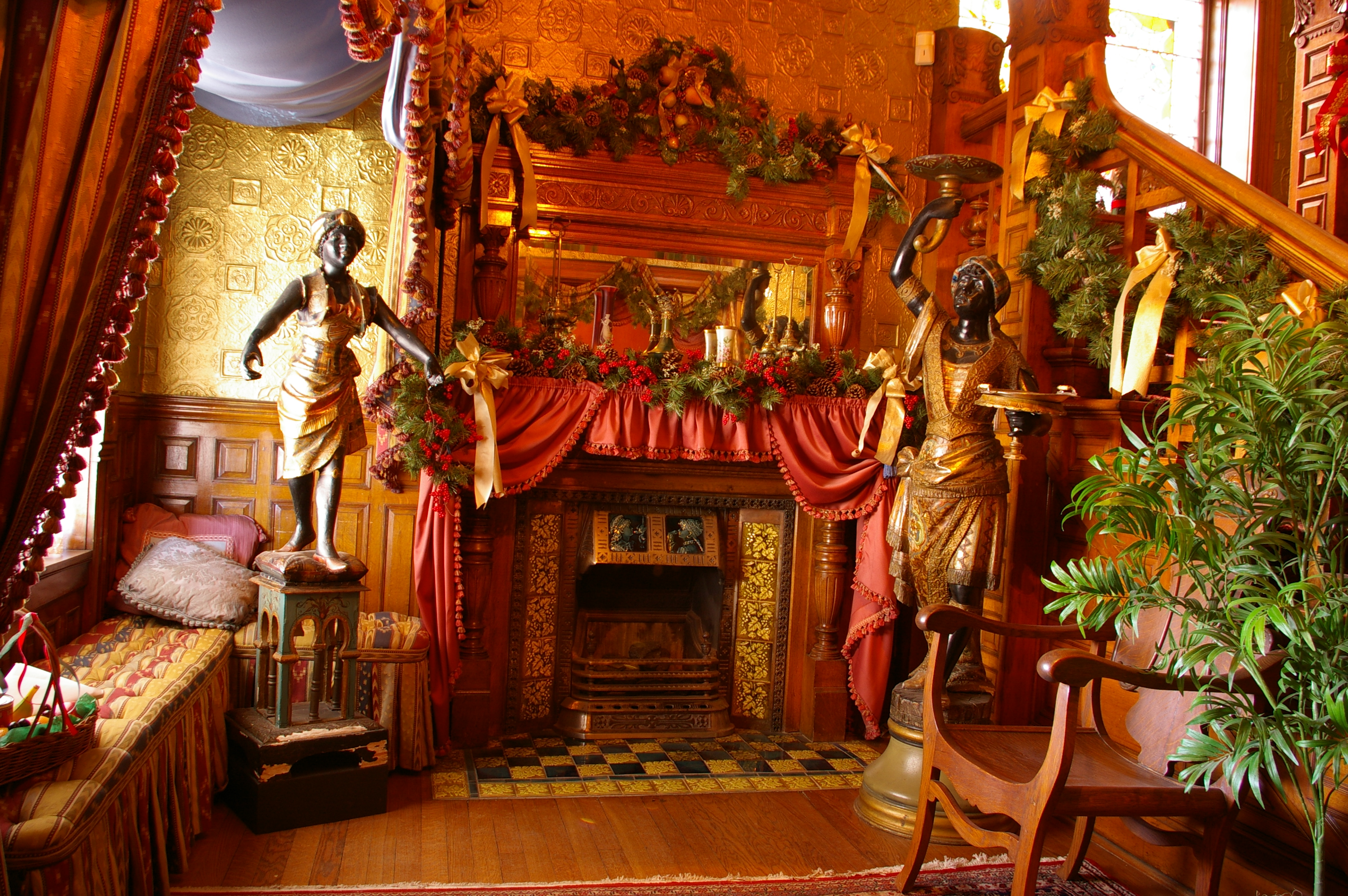 Christmas is possibly the most magical and exciting holiday out of the year for children and adults alike.  While today our celebrations are primarily secular, for Victorians Christmas was a primarily religious holiday where special attention was paid to those less fortunate, such as the poor and lonely.  During the Victorian period, Christmas began to change from replicating old European into a holiday that was unique American.  A combination of increased industrialization, which allowed for mass production of decoration and gift, and the fact that Christmas became a national holiday in the year 1890, celebrated by many Americans regardless of religious background.

Certain works were seminal in developing the much ideology we associated with American Christmas today.  “Knickerbocker History of New York” by Washington Irving published in 1809 changed St. Nick from a stern figure to Santa, a character known for his jovial nature.  ‘Twas the Night Before Christmas, part of Clement Moore’s book Account of a Visit of St. Nicholas, published in 1822 established the magic that is part of the holiday today, Charles Dickens’ A Christmas Carol, published in 1843, provided a moral anchor for the holiday though not particularly religious.  In the 1860s Thomas Nast made a series of illustrations that ran in Harper’s Weekly.  Nast created the myth of the North Pole, the suit with fur trim, and the toy workshop through his illustrations.  Thanks to these works Christmas was given a specific look, a moral code and a happy Santa to pull it all together.

Because of the massive waves of immigration during the Victorian period, traditions of other European countries influenced the look of our holiday.  The Christmas tree and many early glass and paper ornaments came to us from Germany, the manager scene comes from Italy, and the tradition of sending Christmas cards comes from England.

Combining all of these influences the Victorians began to develop their own traditions regarding the holiday.  Holiday festivities included decorating the home, the tree, making presents, presenting the gifts and having Christmas dinner.  For home décor Victorian used greens, wreathes, favorite mottoes and sayings made of cut out letters.

The tree was a much more complex ordeal.  Trees were decorated with homemade ornaments, glass and paper ornaments from Germany, and cotton ornaments.  Cotton ornaments were particularly popular in America at the turn of the century.  Popcorn strands, either left white or painted with silver or gold paint, added color to the tree.  People also added cranberries, dried apples, and walnuts.  This tradition of trimming the tree in edibles made the day the Christmas tree was taken down, usually twelfth night, a party in and of itself because everyone was able to enjoy all the goodies on the tree.  Tinsel and garlands added more color to the tree.  American flags were a traditional part of the Victorian Christmas decorations as well, showing a surge in patriotism that was part of the Victorian period.  Often candles were used to add light to the tree. Because this tradition was a fire hazard Victorian would keep a bucket of water with a sponge or mop and a bucket of sand to put out fires.  Candles would not remain lit for very long but while lit would add a magical feel to the tree.  Once Thomas Edison invented the light bulb it only took three years for this new technology to make it to Christmas trees.  With this advance, lights could remain lit for much longer periods of time.

Presents were usually homemade and served as part of the tree’s ornamentation or were placed beneath it.  Popular women’s magazines from the time period included many admonitions about the holiday becoming too commercialized but based on the availability of commercialized products and their popularity during this time period, it does not appear that too much attention was paid to these warnings.  Families who lived in or near cities often had many more store bought presents.  Families living in more rural locales could purchase gifts at charity bazaars or store catalogues, but most often made their gifts at home.

The presentation of the gifts was a complicated and elaborate part of the holiday as well.  Women’s magazines also had advice on how to make this a fun part of the holiday.  One unique example is that of a Christmas pie.  Gifts would be wrapped and then tied with a long piece of yarn.  All the gifts would be placed in a pie dish and then a pie crust would be placed over the top.  The yarn would stick out of the pie crust while it baked.  When it was finished the pie would be placed in the center of the table.  Each guest was given an end of string and would pull until they found their present.

Understanding the Victorian Christmas can help to gain a better appreciation for the holiday we celebrate today.  While our holiday has its foundation in helping others and providing for those who are less fortunate, we also struggle with the commercialization of the holiday, just as the Victorians did.  It’s interesting that even during the Victorian time period, a period we tend to look at with nostalgia, popular ladies magazines were warning about the dangers of over-commercialization.  Victorian seemed to love the decorating and preparation even more than we do today.  Their holiday traditions influence in many ways the holiday that we celebrate today.