Victorian Horrors: Death and Mourning in the Time of Seperate Spheres

It could be said that Victorians had a morbid fascination with death.  Historians have come to call this fascination the “cult of death”-which helped to define the period in which they lived for years to come. For Victorians, both in America and abroad, the home is not only a place to raise your family and relish in your societal accomplishments, but the home is the physical embodiment of yourself and the image you would like presented to the public.  For a society that had a very heavy reliance on separate, private and public spheres, holidays provided an opportunity for the usually “buttoned-up” Victorians to express themselves through decoration.  From 1860-1910, America had found itself not only coming through reconstruction after the civil war, but trying to identify the ways in which this newly reformed union would work cohesively.  Societal interactions had an additional layer of importance added to them; your home and the ways in which you presented yourself would speak more about you than anything else could.  Celebrations such as All Hallows’ Eve and Christmas, allowed Victorians to show their spirit through decorating their homes, and boy did they.

Halloween was favored by many victorians, and some believe that this appreciation of All Hallows’ Eve stems from the changing attitudes towards death and mourning post-Civil War.  When a death occurred, it would touch every facet of the family; Mourning practices were typically grandiose and affected the decoration of the home, the clothes women would wear, and even the ways in which the lost would be memorialized.  Although the practice of death portraiture and mourning photos had been around for more than 100 years, “photography too, held an important place in the clutter of mourning artifacts.”

Originally, death masks and death portraits would be created after a person had passed in 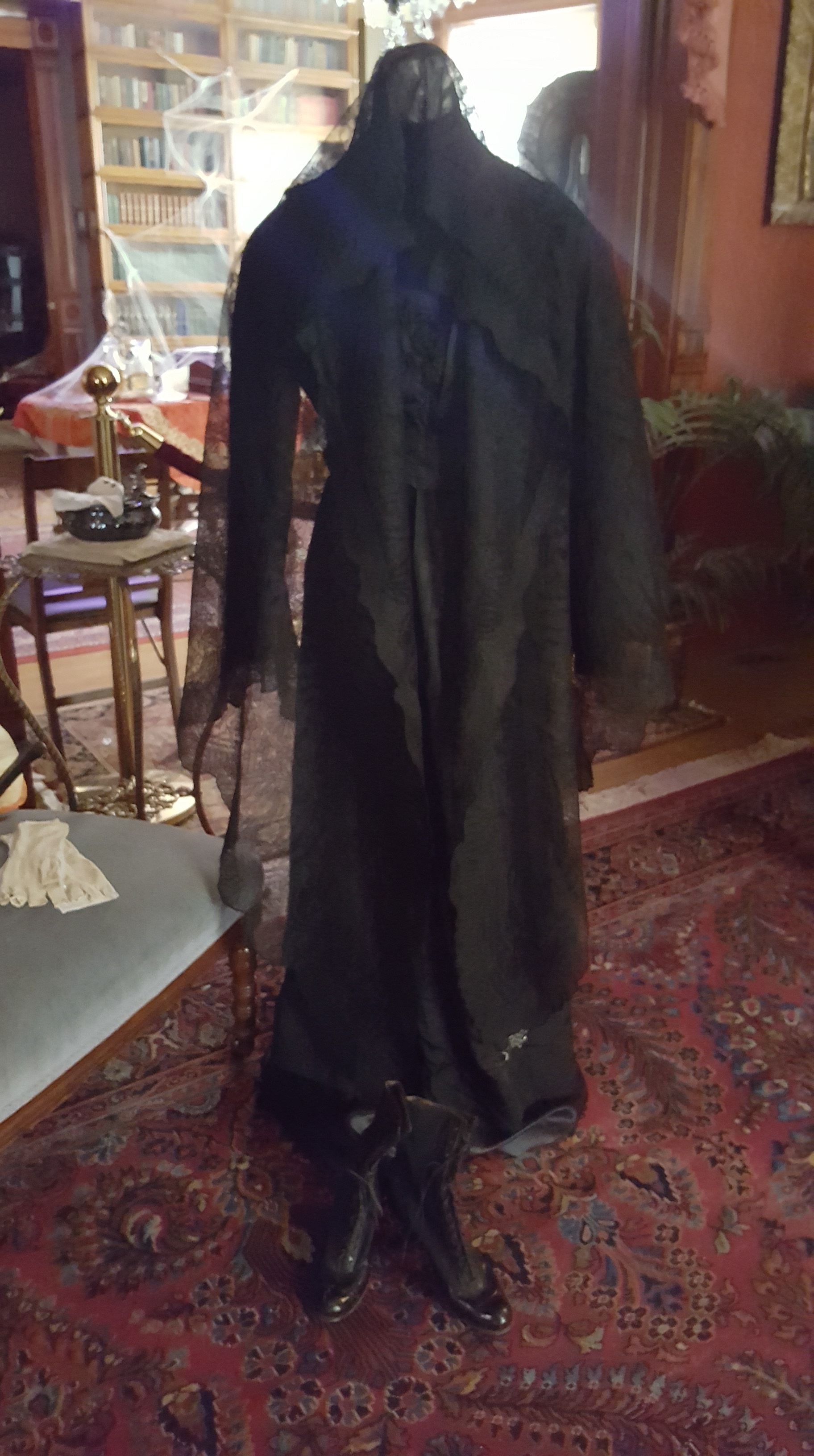 order to memorialize them to history if they were a prominent general, politico, etc. The Victorians took this idea and expanded upon it greatly, “death was an acknowledged and public event, and responses to death were at the forefront of the social customs of the time”.  After a person had passed, a mourning portrait was taken as a memorial, but also to set up in the home during the mourning period specifically. As seen in the photograph of Margaret Brown’s House of Lions, set up for our very own Victorian Horrors event, the mourning period would affect all facets of the home.  You can see a typical mourning outfit-in which women were expected to cover near every part of their body with different variations of black, depending on whom they

were mourning.  Women were often viewed as the “true vessels of grief” and during mourning was one of the few times that women were able to express emotions publicly.  You can also see that all mirrors are covered, this is based on the belief that a mirror can act as a looking glass and the spirit of the deceased could become trapped in it. 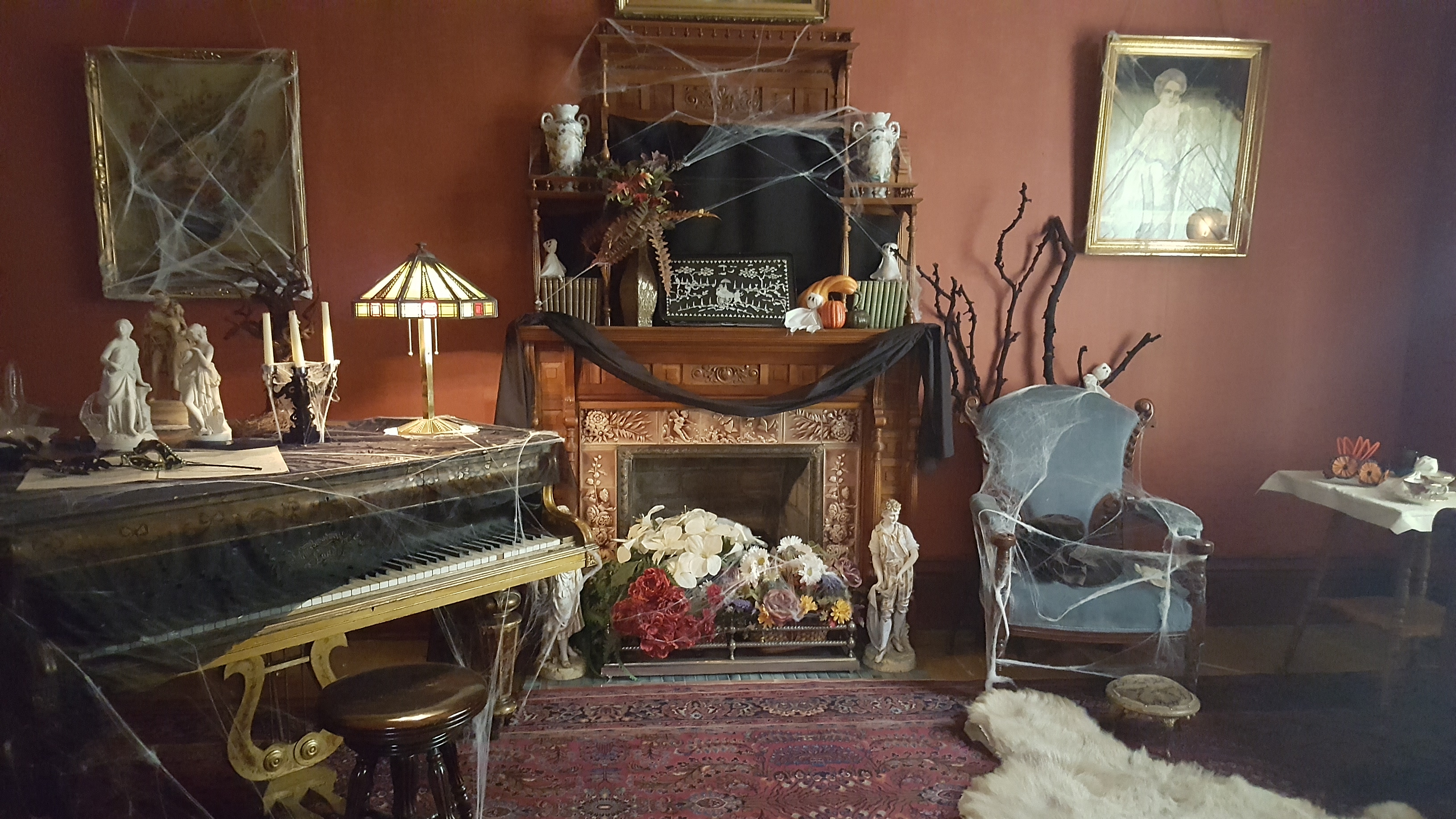 While many didn’t fear death, they did fear not being properly mourned; it was an extremely common practice to hold a funeral at home and “it was customary to prepare the home for the ‘death watch’, the time between dying and the funeral”. The body of the deceased would either be proudly displayed in the parlor, or tucked away in their bed to appear as if they were simply, sleeping.

Originally, the ability to have a proper mourning portrait was reserved for the upper middle class, as it required a financial commitment to have a photograph taken-remember the first photograph was taken in 1827, but it required nearly 8 hours of exposure time!  For the wealthier middle class, the mourning period was a, “socially accepted [and expected] venue for a show of wealth and rank”. With the advent of daguerreotypes in 1836, the practice was able to become more widespread.  Daguerreotypes had become more popular for those with a limited income and became more sentimental than a painted portrait or photograph; a “daguerreotype is a remarkably detailed, one-of-a-kind photographic image on a highly polished, silver-plated sheet of copper, sensitized with iodine vapors, exposed in a large box camera, developed in mercury fumes, and stabilized (or fixed) with salt water or “hypo” (sodium thiosulphate)”.  This required the subject to sit extremely still for the duration, movements often resulted in a ruined daguerreotype with a person’s face now a blur. However, this form of photography was much more cost effective, and although it required you to sit extremely still it was not the 8 hour wait time that earlier methods required.  It was a logical step for Victorians to use this form of photography for their mourning portraits, as the subject would be extremely still.  With this type of medium, a mourner was able to carry a framed daguerreotype with them in memoriam as well as place them throughout the home. 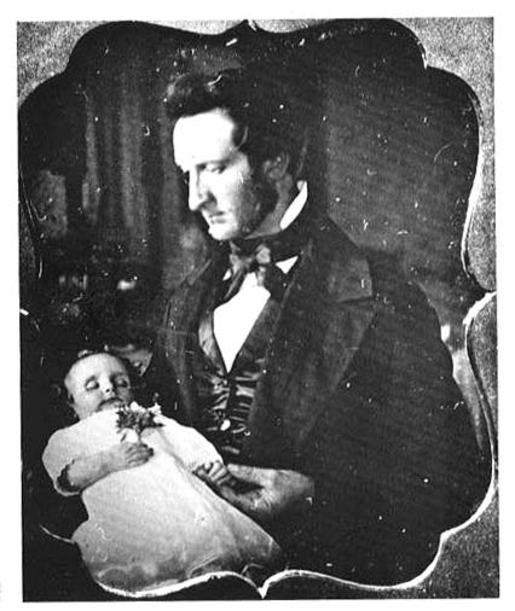 This type of hand-held memorial was extremely popular when the death of a child would occur; it was a natural connection for families to take mourning photos of their children as it was unlikely that they would have had a photograph of that child previously.  Typically, children would have their mourning portraits taken in bed to appear sleeping, or as the era wore on, it became more common for children to be photographed with their bereaved parents.  For adults that had passed, the mourning portraits that would be taken of them would typically involve making them appear as life-like as possible, as opposed to simply appear sleeping.  For many mourners, having a person appear to be standing, or sitting in the parlor with their family, helped to link together the notion of remembering a person, rather than simply mourning them.  As the technology of the era progressed and mourning portraits became more financially accessible, it became apparent that for some families, the mourning portrait would be the only opportunity to have a complete family portrait.  After the turn of the century, it wouldn’t be uncommon for every member of the immediate family to be part of a mourning portrait with the corpse of the family member who had recently passed.   As the era progressed, Spiritualism started to take hold.  This prompted mourning portraiture to change from the typical portrait to one known  as Spirit Photography. This form of mourning ephemera differed from the typical mourning portraiture, as it focused namely on the family member who lost a loved one offering the mourner a different view of themselves.  Nancy Armstrong had asserted in her research, that “the so-called material world to which Victorians were apparently so committed was one they knew chiefly through transparent images, images which in turn seemed to bring them conceptual and even physical control over that world.”  The ephemera that surrounded mourning had become extravagant, and it led to some members of society to reject the notion that mourning should be a public event; there were some who were still staunch believers in the separate spheres that defined the era.  Showing emotion in public was thought to be a social catastrophe by revealing too much of yourself to the public.

Victorian homeowners believed that the items placed in and around your home should have either an ornamental or sentimental value, the functionality of a specific item wasn’t as prudent.  The Victorian home was a public symbol of your life, the items inside should be no different.  When commissioning a mourning portrait or daguerreotype, it was your lasting impression on society; children were often surrounded by flowers and meant to look ethereal. It is thanks to the Victorians that we have the practice of sending flowers to grieving families, as well as having flowers prominently displayed during funerals/memorials.  Families of adults who had passed on the other hand, would stage their loved one in a particular room, in a particular stance with intentional items so that their memory would be evoked the way they desired.

Although a public and drawn out mourning/funerary period seem astonishing to us now, it was very much a way to celebrate the memory of those who you loved dearly in this life.  The ability to wear your heart and emotions on your sleeve is one that doesn’t necessarily fit in with our notions about Victorian society.  What we can learn from these “Victorian Horrors” is the importance of not only family to a person, but the importance of the perception of a person after they’ve passed.   The tradition and customs that had surrounded the notion of mourning for decades slowly started to drift away as we turned our focus to the 20th century.  If one pays close attention however, they may realize that we are more Victorian than we may want to admit when it comes to our 21st century mourning practices- flower arrangements at the grave/home, funerals, dressing in black-are all customs that we can trace back to the “Victorian Horrors” of our ancestors. Happy Haunting!