Fifty years ago, on December 11th, 1970, a non-profit officially incorporated as Historic Denver, Inc.  Concerned citizens had watched the demolition of several iconic Denver buildings in years prior, so this group banded together and started with saving 1340 Pennsylvania Street.  Designed by William Lang and occupied by Titanic survivor and social activist Margaret Tobin Brown, this Queen Anne structure represented Denver’s gloried past, the struggles of a growing urban center, and the potential to be a catalyst for city-wide preservation projects.

A letter was written in September of 1970 by Denverite Christine Kosewick to Ann Love, wife of then Governor John Love. In this letter, Kosewick asked Love for help in bringing to Denver’s attention the many compelling reasons why the house of Margaret “Molly” Brown should be preserved. Within months of this letter, Historic Denver was formed and held its first board meeting in December, 1970. Members at this meeting included Dana Crawford, Christine Kosewick, Ken Watson, Helen Arndt, Robert Carper, Harold Haney, and Arthur Leisenring.

At the time, Arthur “Art” Leisenring was the owner of 1340 Pennsylvania Street.  He was a veteran, business owner, and tireless advocate for the Molly Brown House.  He was also an animal advocate, serving on the board of directors for the MaxFund animal adoption center.  On land donated by Leisenring, MaxFund continues to provide care and shelter for abandoned and stray animals. 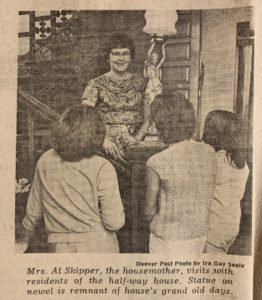 Art Leisenring had purchased the Molly Brown House at 1340 Pennsylvania Street in 1958 knowing the compelling story of Mrs. Brown. He ran it as the House of Lions Rooms, living in ½ of the main floor. He had a housekeeper living on the other side, and the other rooms were rented out.  Leisenring also collected documents and ephemera related to Margaret “Molly” Brown and her home, bringing it all together in a scrapbook. In 1967 Leisenring turned the house over to the City & County of Denver to operate a Jane Addams Halfway House Program to house girls on a path to rehabilitation.

Upon the formation of Historic Denver, Leisenring negotiated a lease agreement allowing Historic Denver, Inc. to offer tours of the home of the famous “Molly” Brown. Before any work had even begun, thousands of people visited, often with a line stretching around the block. Based on this interest, Historic Denver raised funds to place a down payment and assumed the $80,000 mortgage as agreed upon by both parties.

In addition to Historic Denver’s new flagship property, the Molly Brown House Museum, projects quickly piled onto the plate of this grassroots group.  After a lost battle over the Moffat Mansion which gained wide media attention, Historic Denver facilitated the restoration of the Tramway Cable Building, designed by William E. and Arthur A. Fisher, which now operates today as leased office and restaurant space. 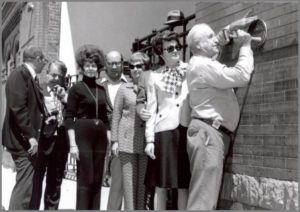 Historic Denver board members install the landmark designation plaque on the Tramway Building, 1972.

Historic Denver then raised funds to begin work on the 9th Street Historic Park, an innovative effort to save Denver’s oldest neighborhood at the heart of the Auraria Higher Education Campus development. An anonymous donation was given to begin restoration work, which resulted in the selection of 14 representative structures to create the 9th St. Historic Park, a block of Victorian era residences and commercial buildings built between 1873- 1905. This project also helped train and launch a generation of skilled restoration carpenters and preservation specialists who went on to save more properties. The resulting historic district, which includes a total of 33 contributing buildings on the Auraria Higher Education Campus, was listed on the National Register of Historic Places in 1973.

At the end of its first decade Historic Denver had already transformed the future of the city. The 1980s and 1990s brought new challenges as urban renewal and redevelopment continued to threaten much-loved landmarks. One initiative engaged students in preservation which led to the designation of dozens of historic schools.   At the same time, neighbors across the city awakened to the value and quality of the city’s network of historic neighborhoods, including more modest homes such as those in Potter-Highlands, Whittier, and Baker. These were protected by historic district designation just like the more opulent homes in Country Club, Humboldt Island, and along 7th Avenue.

Now in the second decade of the 21st Century, Historic Denver’s Action Fund catalyzes innovative community projects that enhance Denver’s authentic flavor. Explore a historic neighborhood on a Walking Tour or take a guided tour or see an exhibit at the Molly Brown House Museum. Attend an Empowered by Place forum to discuss current social justice and preservation topics or volunteer for the Discover Denver survey project to learn about our city’s unique buildings. Take advantage of Historic Denver’s experience and expertise to care for a historic property or launch a community preservation project – Historic Denver offers guidance in the form of technical assistance, contacts, tools and incentives.

Looking back to 1970, a legacy began that continues to passionately protect the places that matter to Denver. Historic Denver’s programs, events, and exhibits continue to educate, entertain, and inspire community engagement. Looking forward to the next 50 years, Historic Denver is here to help you explore the full story of our city’s past and better understand the challenges facing its preservation today and into the future.