Do you ever wonder where some of our Christmas traditions come from? The Victorian period saw many changes to Christmas due to the massive influx of immigrants and industrialization which helped create our own American traditions. In 1890, Christmas became a national holiday and was celebrated by many Americans regardless of their religious background. At the Molly Brown House Museum we are swept up in the holiday spirit with our decorations, and our fun events such as our Candlelight tours and teas.

The Germans brought over the idea of a Christmas tree, and it was widely accepted as a major decoration in the Victorian time period. Typically, a Nativity scene would be found underneath the Christmas tree. Where would they put their presents? The gifts would actually be tied to the branches, rather than hiding them underneath the tree. During the 1890s, single kernels of popped corn were sometimes pinned to the ends of the tree branches with straight pins to simulate snow. Trees were covered in paper flowers, flags, lace bags, and tinsel. German-made blown glass ornaments were introduced around 1860 and both European and American ornaments became commercially available by the 1880s. On top of the tree was typically a large tin star, elaborate angels, or an American flag. In the early 1900s, popcorn balls were popular, as were strings of popcorn dyed red and green. Goodies- such as candied fruit, painted nuts, strings of popcorn, cranberries and cookies- adorned the tree. The yummy decorations tempted the children until the 12th night of Christmas, when they were shaken from the tree and eaten! 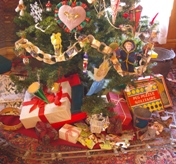 Thrifty Victorian families kept their trees year after year. Trees were often kept up until spring, then taken down and stored to dry. The following year, the tree was stripped of its needles and the branches were wrapped in cotton to mimic snow. Additional “snow” was provided by shaking mica flakes over the tree.

Having one Christmas tree was simply not enough, many families during Margaret Brown’s era had multiple trees throughout the house. Because of the multitude of trees in the house, it is easy to understand how using real trees could lead to deforestation. Interesting enough, the debate of real tree versus artificial has been going on for over 100 years. One alternative to a live tree was the feather tree. Germany began producing these trees as early as 1845 and they are credited with inventing the first artificial tree. Feather trees arrived in America through German immigrants transporting them overseas.

The feather tree was made to resemble the white pines of the German forestland. These trees grew with wide spaces between their branches, short needles and berries at the end of every tip. The tree was made of wire, wood, berries and feathers. Metal wire was usually covered with goose, turkey, swan or ostrich feathers. Ostrich feathers were primarily used for the feather trees displayed in stores and very large homes. They were typically dyed green to bear a resemblance to pine needles. Feather trees could range in size anywhere from 17 to 55 inches. The first feather tree manufactured by a larger company appeared in the Sears and Roebuck catalog in 1913.

Because of the prevalence of synthetic artificial trees, the feather tree is a Christmas tradition that has been lost over time. Does your family have any traditions similar to the Victorians? Do you still add any tinsel, cookies, stars or popcorn strings to your tree today?