Traditional Thankfulness In A Nontraditional World

We’re all generally familiar with the Thanksgiving story. It’s 1621; the Pilgrims and Native Americans are coming around a large table in Plymouth colony after a year of harsh winters and bountiful harvests. Everyone’s holding hands, singing Kumbaya, and saying a collective prayer. Ok, maybe that’s not exactly how it happened (even though that’s how I like to imagine it) , it still warms our hearts.

Often times many people skip over Thanksgiving–not deliberately, it just happens because the crescendo of the year, the holiday of all holidays is quickly approaching– Christmas. But let us not forget this subtle yet significant holiday, especially because it meant something so significant to those in the past.

Every year, on the fourth Thursday in November, we sit down and partake in tradition. But how did we even get here? What rituals did we do in the past to make this a meal with a lasting legacy? Well, we know about the Pilgrims and Plymouth. Maybe we know that in 1863, in the midst of the Civil War, President Lincoln established it as a national holiday on the fourth Thursday in November. But we generally do not know what the generations following Lincoln’s establishment did to celebrate this holiday, how they founded traditions, and preserved the spirit of the holiday.

The Victorians, as many people know, were pretty elaborate people. If anyone knew how to celebrate the holidays with class, it was them. Thanksgiving was no exception. In fact, at the first Thanksgiving they did not have turkey as the main attraction, most likely it was venison, duck,and maybe lobster.  However, when Sarah Josepha Hale adamantly demanded for thirty years that Thanksgiving become a national holiday, she also set the standard for the contents of the Thanksgiving meal. The Victorians effortlessly picked up that torch and made the tradition thrive. According to one source, the Victorians:“always enjoyed a lavish banquet, but they were also frugal. After the Thanksgiving turkey dinner had been eaten–they ate plenty of leftovers, just like we do today. Victorian cookbooks and magazines contained recipes such as ‘Deviled Turkey,’ ‘Turkey in Savory Jelly,’ and ‘Thanksgiving Turkey Pot Pie’ for dressing up the remains of the Thanksgiving meal to be served on Friday.”

Not only did they set the standards high for the consumed goods, but they also established (as many believe) the best aspect of the holiday, football.  In 1876 the American Intercollegiate Football Association held the first championship game on Thanksgiving day. By the 1890s, large crowds would attend ivy league games and it grew in popularity. Thus, Turkey day football was born.

Although today’s typical Thanksgiving festivities are not exactly how they celebrated in 1621, the Victorians were able to preserve and recreate the nostalgia of the holiday. Not only did they help establish many of the traditions we celebrate today, but they understood the meaning of Thanksgiving. They cherished hearth,home, and family during a time when progress and industrial change dominated the social atmosphere.

Now, even in a world where social networking and global connection define the social scene, we are still able to go back to our roots for a moment. Let us take advantage of tradition and cherish this holiday for what it is–a time of reflection and remembrance. 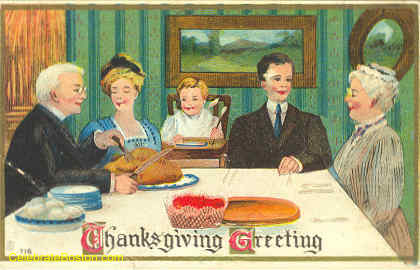 Happy Thanksgiving to you and yours from the Molly Brown House Museum!