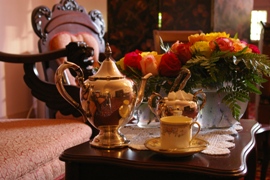 Do you every wonder why there is a coffeehouse on every corner in America and not a teahouse? America’s love/hate relationship with tea dates back to before America was even America. In the 1700s, tea was the preferred hot beverage. Even though it was the Dutch that first introduced the beverage to the New World, it was Britain that created teahouses all throughout the 13 colonies. During the 1700s tea was drunk by everyone: from soldiers to fur trappers to settlers.

In 1760, after George III had become King of England, Parliament began passing laws that both restricted the freedom of the American colonists and heavily taxed them. The colonists bitterly opposed the new British policies and taxes. They claimed that Britain had no right to restrict their settlement or deny their freedom in any way.

In 1770, Parliament repealed all taxes except the tea tax. Furious colonists vowed not to use tea and colonial merchants refused to sell it. The famous Boston Tea Party on December 16, 1773, was a dramatic demonstration of their opposition. Tea drinking was renounced at the time by all true American patriots and coffee took its place as the preferred hot beverage.

Over 100 years later, two discoveries changed American’s notion of tea. In 1904, the St. Louis World’s Fair took place under a hot humid Midwestern summer. To compete with the lemonade booths, tea was poured over ice to provide a cool drink. Iced tea was born.

Also in 1904, the tea bag was created. It started as a marketing gimmick by Thomas Sullivan, a New York tea merchant. He sent customers samples of his teas in little silk pouches. To his surprise, orders began to pour in for tea packaged this way.  People discovered how convenient it was to brew their tea by simply pouring boiling water over the bag.

Taking tea has slowly started coming back in vogue. Tea houses are starting to pop up everywhere. Even here in Denver, you can enjoy your tea at the Molly Brown House Museum’s Holiday High Teas in the month of December. So the next time you are sipping on your hot or iced version of tea, take a moment to reflect that it was tea, not coffee that put a sequence of events that led to the creation of the United States of America.