Just 10 miles southwest of the Molly Brown House Museum, at Wadsworth and Yale, is the Browns’ summer retreat, built by J. J. Brown in 1897. The Molly Brown Summer House, which the Browns dubbed “Avoca Lodge,” was a peaceful getaway for Margaret and J. J. to escape the hustle and bustle of city life. Eventually the Browns spent less time at their summer home, leasing it out and eventually selling it. In 1928, Robert V. Fehlmann and his wife, Rose, purchased the house.

Granddaughter of Mr. and Mrs. Fehlmann, and current owner of the Molly Brown Summer House, Mary “Momo” Shearer shares her fascinating insights with us about the Browns’ “other” Denver home.

“In 1928,” explained Momo, “my grandparents purchased the last 96 acres of the original 400 acres that the Brown family owned. No, we are not related to the Browns; my grandparents were the Fehlmanns, who were the second family to own the house after the Browns, and we’ve been here for 91 years. My mom, Jane Fehlmann Garland, my two brothers and I run the house now as an event space. Our staff and I enjoy giving tours and we learn something new every day.

“The Browns never called it the Molly Brown Summer House; they called it Avoca Lodge. It’s an Irish word that hails from Wicklow County, Ireland, where you can go and stand at the convergence of two waters. Avoca is a tourist site in Ireland where visitors go to see the meeting of the waters, made famous by poet Thomas Moore. We think the Browns must have gone through Avoca at some point, because this convergence looks exactly like Bear Creek Valley, where the Browns’ summer home stands. Mr. Brown brought Margaret to the top of the hill, and as they looked down over the valley they were reminded of Ireland.” 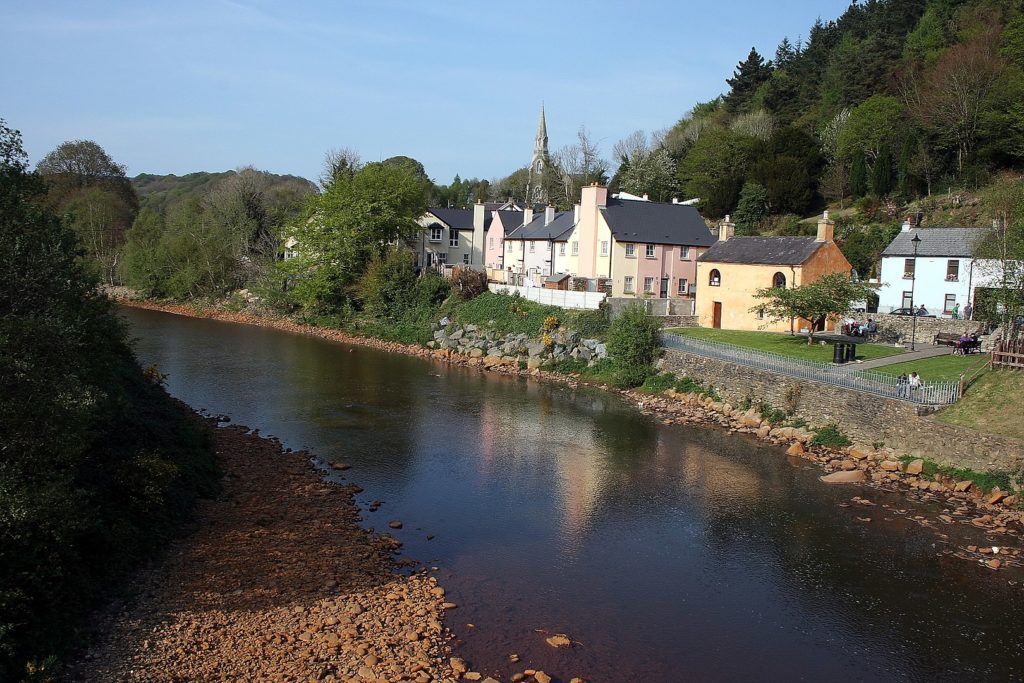 Margaret and J. J. Brown were inspired by a poem, “The Meeting of the Waters,” written by Irish poet Thomas Moore, who grew up in Avoca. The poem is a beautiful expression of friendship and contentment felt in the “Sweet vale of Avoca.”

THERE is not in the wide world a valley so sweet

As that vale in whose bosom the bright waters meet;

Oh! the last rays of feeling and life must depart,

Ere the bloom of that valley shall fade from my heart.

Her purest of crystal and brightest of green;

’Twas not her soft magic of streamlet or hill,

’Twas that friends, the beloved of my bosom, were near,

Who made every dear scene of enchantment more dear,

And who felt how the best charms of nature improve,

When we see them reflected from looks that we love.

Sweet vale of Avoca! how calm could I rest

In thy bosom of shade, with the friends I love best,

Where the storms that we feel in this cold world should cease,

And our hearts, like thy waters, be mingled in peace.

“That’s why they called it ‘Avoca,’” said Momo, “because they saw their home as a beautiful green valley filled with water. When you take the time to read the poem, you understand what it meant – the Browns really loved this place. To them, it was more than just a red brick house. As we say on tours, ‘this is where they brought their noses down and let their hair down, and relaxed with their family and friends.’

“It was Mr. Brown’s dream to have a country home. He envisioned Avoca like the big sprawling ranches out in Highlands Ranch and he hoped his pals would also buy sprawling acres near him. He wanted it to be a gentleman’s home; it was a place for them to rest and relax, but it also needed to make money.

“The Browns raised horses, fowl and fruit.” When looking underneath an exterior staircase, Momo found statuary of a thoroughbred horse, which she says is an original piece of the house and a testament to the Browns’ love of thoroughbreds, which they raised out at Avoca. “They raised hens, geese, peacocks, chicken,” Momo explained, “and of course their kids too, so that they could be raised in a clean environment. Downtown Denver was a very busy, growing city and they wanted to be out in the fresh open air.

“They had a thousand orchard trees of every variety. We have a tree out in our parking lot because it’s one of the last apple trees still on the property. We built the parking lot around the tree. Residents nearby us will say, ‘Oh I have plum trees in my back yard and we’ve always been told the Browns had plum trees.’ They did have plum trees, along with apple, cherry, peach, and pear trees.

“He put the house exactly where it sits for very good reasons. Number one, he had water to the north in Bear Creek so he could water his cattle. North of the house at the highest point of the property, an 800ft-deep artesian well still runs. That’s where he put three steel windmills atop the hill, hooked the well to the windmills, and hooked the system to the house. We have documentation that states their fountain in the south lawn ran 24-7 from this water system. We have two photos showing the Browns’ fountains and that’s how they watered their horses, animals, alfalfa – you don’t have a thousand orchard trees without irrigation!”

There were many more reasons J. J. chose this precise location for his summer home. As Momo states, “Loretto Heights is a 5-minute carriage drive away where Margaret often visited the sisters of Loretto, they had a beautiful view of Red Rocks to the west, and they had close access to Fort Logan which today is a cemetery, but back in the day it was a prestigious military officers’ base. The Browns used wagon transport to move their fowl and fruit to Fort Logan, and J. J. may have felt he had built-in customer base just a quick wagon away to the thousands of soldiers Fort Logan housed. From there, he used the Sheridan Junction train to transport his loads into the city.”

When asked whether she would like to share any other significant stories about Avoca, Momo replied, “There is a quote in which Mrs. Brown talks about bringing things back from Europe, and I believe she was teased about it. She says she decorated up a few acres of the Rocky Mountains. I believe this part is about Avoca.” Momo is referring to a quote by Margaret Brown printed in a Paris newspaper on January 20, 1929:

“Some people find it strange that an American woman should aspire to play the roles of Bernhardt. I recall, too, that some people smirked when I brought home ancient statuary from Egypt and decorated up a few acres of the Rocky Mountains for my home, but I am sure that those who know the place will agree that culture knows no boundaries and that fine arts are international.” – Margaret Brown

When you take a tour of the Summer House, you’ll see an original 1897 structure including a piece of column in which J. J Brown inscribed his name. Momo explained, “The Browns put their name on the house. The house is the artifact to see, and it is entirely original to the Brown family.”

Tours of the Molly Brown Summer House are given year-round. Just give them a call to set up your reservation. In addition to tours, you can host private events such as weddings and holiday parties. The gift shop opens soon, so be sure to grab their most popular item, a beautiful hand-tied gift basket for your family and friends. Call 720-253-8349 to experience this significant piece of Margaret and J. J. Brown’s history.