While the Molly Brown House Museum, aka the House of Lions at 1340 Pennsylvania Avenue in Denver, is undeniably the most famous residence of Margaret Brown, this was not the only house which she spent her time in. After she separated from J.J. in 1909, Margaret not only traveled even more than she had before, but also moved homes several times. This included, in 1913, renting a cottage in Newport, Rhode Island, in which she lived for several years.

Based on evidence from title deeds and newspaper articles, Margaret began renting the Reitz Cottage in Newport in 1913, owned by Mrs. Aimee Reitz, which Margaret would later call “Mon Etui” (this French phrase directly translates to “my little box.”). The property is known to have been at 44 Bellevue Avenue in Newport, and has been replaced by a parking lot in the years since.  We have few details on the house itself, its interior decoration or why Margaret chose this name, but we do know that the location of the home and Margaret’s renting of it played an important role in her increased activism in the suffrage movement. 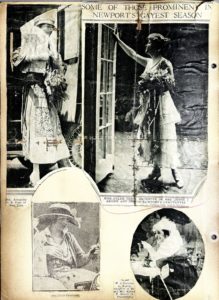 Newspaper accounts clipped and saved by Margaret’s niece, Helen Tobin, in a recently-acquired scrapbook, have given us more information on Margaret’s activism within the suffrage movement. It has also provided illumination on how this activism tied in with Margaret’s move to Rhode Island. Various sources show that she was at least socially acquainted with Alva Vanderbilt Belmont, the famous resident of Marble House in Newport and an avid supporter of the Women’s Suffrage movement. Indeed, Margaret’s cottage was a mere two miles from Marble House. Her own work with the suffrage movement tied with Alva’s to a certain extent. In 1914, Alva Belmont hosted the Conference of Great Women at Marble House. This was a widely publicized meeting of many suffrage activists from across the country in an attempt to discuss the movement and their goals and plans. This included prominent women’s rights activists such as the first woman state senator in Colorado, Helen Ring Robinson, the Duchess of Marlborough and Judge Mary Barteine, along with many other notable women. The conference is recorded through newspaper clippings from Helen Tobin’s scrapbook, describing the guests as well as the site of the event, Marble House’s Chinese Tea Room. Margaret helped Alva with the conference by offering her own cottage to host some of the major speakers like Senator Robinson. Margaret then hosted her own series of suffrage meetings at Mon Etui. 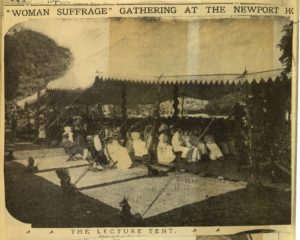 News clipping about the Conference of Great Women

Margaret’s cottage in Rhode Island played a significant role in her activism and connections in the Eastern United States. Her proximity to New York and Washington, D.C. in comparison to Colorado gave her many new opportunities to commit to her activism in the Women’s Suffrage movement. Indeed, she was living in Rhode Island in 1914, when she considered running for the United States Senate, and was very involved in suffragism in New England during this time. Furthermore, she offered the house to the US government in 1918 for “use in the construction of ships” for the war effort. Just like her house at 1340 Pennsylvania Avenue in Denver, and her penthouse in the Barbizon Hotel for Women in New York, we can often tell much about Margaret’s interests based upon the home in which she was living at the time. It is a common uniting theme in the study of historical places, with homes often reflecting the personalities and priorities of their owners. We can see this in Margaret’s cottage, with her activism and increased focus on the suffrage movement reflected in her choice of home.