Margaret’s Christmases Through the Years

Margaret Tobin (later Brown) celebrated her very first Christmas in Hannibal, Missouri. She was born in 1867, just after the Civil War, to hard working Irish immigrants John and Johanna Tobin. When Margaret was three years old, Christmas became a United States holiday. Christmas trees became popular in England and America during the Victorian Era, the early years for Margaret. With no Christmas tree lots in the United States, the Tobins like many rural families, would have cut their own tree. As a young child, Margaret’s Hannibal Christmas tree, if she had one, would have loomed big but likely was two-feet tall and placed on a table.

During Margaret’s childhood, Christmas decorations were mostly handcrafted and natural. Pine cones, seed pods and strings of cranberries and popcorn were used as Christmas tree decorations. Homemade marzipan, a type of almond paste cookie, was hung on tree branches, magically disappearing in the hands of children. Paper garlands were created by thrifty families, but could be purchased as well. Butler Brothers, a catalog merchant that had expanded to St. Louis, Missouri, sold some Christmas paper decorations and perhaps a German kugel or two, but the Tobins lived over one hundred miles from the Midwest city so most likely made their own decorations, if any. For a Christmas Eve celebration, a few candles would have been lit and provided tree illumination.

Christmas in the 1870s was centered in church celebrations with little emphasis on Santa Claus. The legend of St. Nicholas spread throughout the United States by way of German immigrants. In later years, the tradition of St. Nicholas leaving presents for children would fade, giving way to the equally generous Santa Claus.

When Margaret became a teenager, the Tobins continued to be a family of modest means. While the wealthy could afford paper ornaments and tinsel as shown in this early 1880’s photograph, the Browns most likely would have decorated with homemade ornaments. 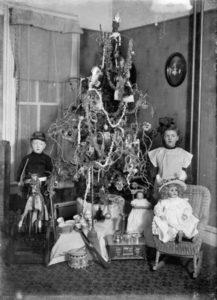 Margaret grew tall, reaching five-feet seven inches in height. As Margaret grew, so too did Christmas trees, outgrowing being perched on a table. With trees reaching ceiling height, there was a greater need for it to safely stay upright. A patent was issued to a Philadelphia inventor for a Christmas tree stand. Decorating the Christmas tree became more elaborate. Across the Midwest, merchants in towns like Hannibal snatched up ornaments at wholesale prices from Butler Brothers in St. Louis. Nearly all of the Christmas decorations, especially tinsel, introduced in the United States during the 1880s and sold through World War I, were manufactured in Germany. 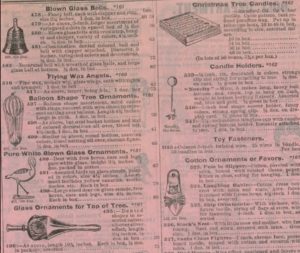 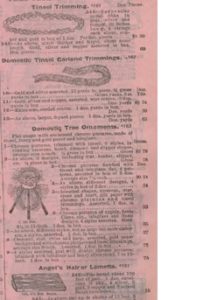 In most American households, candles were used only for Christmas Eve tree lightings. New York City was ahead of every other city with the first electric Christmas tree lights. It would be decades before the fad spread across the entire United States.

Christmas of 1885 was the last year Margaret spent as a Tobin. By the next Christmas, she would leave Hannibal, settle in Leadville, Colorado, and marry a silver miner.

1886 was a transitional and exciting year for Margaret Tobin Brown. With her brother Daniel and sister Helen later known as Nell, Margaret rode a train to Denver, Colorado destined for the mining town of Leadville. The siblings, Daniel, Margaret, and Nell moved in with their step-sister Mary Landrigan. A frequent visitor to the family’s home was Daniel’s mining friend, James Joseph (J.J.) Brown.

As a ruse to see Margaret, J.J. would arrive like a prince on a horse, claiming the need to speak mining business with Daniel. J.J. proposed the second time he and Margaret were alone without a chaperone nearby.[1] In the fall of 1886, the two married just in time to celebrate the holidays of Halloween, Thanksgiving and their first Colorado Christmas as Mr. and Mrs. J.J. Brown.

When they married, J.J. was a mine superintendent, more than poor but less than rich. Leadville was a boom and bust town, situated at 10,000 feet elevation surrounded by snow-capped peaks and mines that brought wealth for their owners. Isolated, the town was a nine-hour train ride from Denver, an up and coming city. The Browns lived just steps from the Harrison Avenue shops that sold everything from fine jewelry to turkeys. Food was plentiful with confectionaries able to satisfy any sweet-tooth craving.

In the 1880s, Christmas anticipation was much longer in duration than the actual holiday celebration. Children attended school and men worked until Christmas Eve. While there were Christmas trees in residences, the largest and grandest decorated would be found in the churches. Leadville had several religious denominations including Baptist, Methodist and Catholic. Each church had a Sunday school with a children’s presentation typically on Christmas Eve.

The churches were decorated elaborately especially the Church of the Annunciation. Margaret and J.J. were staunch Catholics and the Annunciation church was decked out for the standing-room-only mass at midnight. While holly and mistletoe could be purchased for home decorations at a Leadville bookstore, the Catholic church dazzled with evergreen garlands hanging from the ceiling to the chandeliers. A floral star was crafted and hung above the altar guarded by candles topped with glass globes.

Before mass, many Leadville residents had options for Christmas entertainment. Families would walk Harrison Avenue to see the town’s Christmas tree, said to be the largest on display in the mountains. Men had a Christmas Eve option to watch a prize fight or those with an urge to celebrate by dancing could attend a Christmas ball.

While grand to the residents, few in Colorado would have compared Denver or Leadville to New York City or Philadelphia. By the 1890s, in major cities, Victorian families filled every hole, every inch of a tree that reached from floor to ceiling. Flocking of trees became into fashion. Trees were sprinkled with water and then flour was tossed on branches to create a snow effect. Glass beads arrived in the United States from Germany when Frank W. Woolworth began importing German goods. Both Woolworth’s and Butler Brothers sold hand blown German Christmas bulbs. 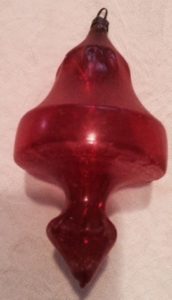 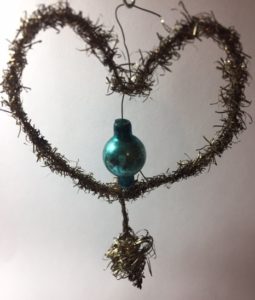 More elaborate tinsel ornaments featured cherubs, saints, angels and doll faces. While electricity had been invented, trees were still typically lit by candles. An improvement was a patented candle holder that could adhere to tree branches. Glass lanterns were also hung on tree branches with a candle inside.

Margaret and J.J. celebrated their last Christmas as Leadville residents in 1892. As parents, with son Larry and daughter Helen, they enjoyed their children’s delight at the awe of Leadville churches decorating trees with candies. On Christmas Eve the Christmas tree branches were stripped of sweets by eager children. As it would be for decades, children were excited to receive presents of dolls and toy soldiers. Santa started to appear more frequently in advertisements putting pressure on parents to grant wishes.

While Leadville was a festive place for Christmas, the Browns would experience a more elaborate Christmas when the family moved to their new home in Denver, Colorado. 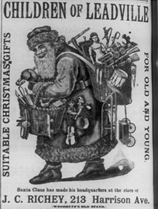 Christmas in Denver, Colorado-Margaret and the Children

Christmas dazzled children. Of small stature, the season and trappings loomed large through their eyes. A table top Christmas tree towered over the head of a four-year-old. Fireplaces were the size of a building when a stocking hung on a mantle couldn’t be reached without a stool. A single musician turned into a concert band and reindeer became the size of elephants.

If Leadville pleased Larry and Helen Brown, moving to Denver made Christmas magical. More elaborate presents and decorations could be found in the “queen city of the plains,” as the Browns were blessed by J.J.’s mining dividends from the gold strike at the Little Jonny mine. With their humble upbringings not forgotten, the Browns donated winter clothes to orphans and warm socks and candy to miners’ children in Leadville.

To the children’s delight, travel from the Browns fashionable Capitol Hill home to downtown Denver was fun with rides on trolley cars. Dressed in nice clothes, with a mother who loved to shop, Larry and Helen would find live reindeer, Santa, musicians and electric lights lining Sixteenth Street.

Instead of Leadville’s Harrison Avenue, Margaret and children might have shopped at department stores with multiple floors of goods rather than just a single level store front. Local newspapers compared the Sixteenth Street bustle of Denver to the intersections near Broadway in New York City. Children were awe struck seeing new toys. Nuts, walnuts, filberts, Brazil nuts, pecans were bought by the pound as Christmas treats along with candy.

The May Department Store and Denver Dry Goods were destinations for holiday shoppers and decorators. J.J.’s good friend David May would honor the Browns request to outfit the orphans of St. Vincent De Paul with a Christmas gift of a warm winter suit, a new pair of shoes and a cap.

Wealthy families decorated their entire house for Christmas. Doorways in homes like Margaret’s and J.J.’s were draped with evergreens and holly berries. Trees in multiples became fashionable. A small feather tree was placed on a table, decorated with one-inch ornaments. A ten-foot spruce, pine or balsam was typically placed in a front parlor to catch the awe of guests. It also became an accessory as the backdrop for Christmas presents.

Tinsel from Germany and the United States was draped on the Christmas tree, many barren until after children went to bed on Christmas Eve. Cornucopias, and strings of cranberries and popcorn continued to be traditional tree decorations. Gingerbread was baked and used for ornaments. Nuts were gilded and pinecones painted in silver. A custom was placing gifts like a teacup or socks inside of a Christmas tree for children like Helen and Larry Brown. It became fashionable to have the tree topped with a star decoration or a glass topper.

Christmas mass remained a sacred activity for Catholics like the Browns. However, the Methodist church used electric lights on their Christmas tree for several years before the Browns arrived from Leadville. As Larry and Helen became adults, Denver electrified not just church trees but streets with wreaths, garlands, and lights. 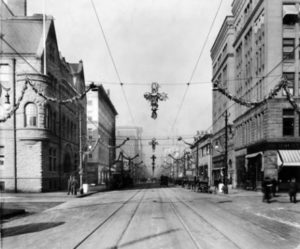 Christmas became somber during World War I. When soldiers returned home, there was renewed interest in Christmas decorating. Honeycomb red bells were fashionable and lovingly saved from one year to the next. Glass bead chains from Germany were all the rage. Candy boxes, now manufactured by machine, morphed from the traditional paper shaped cones.

Sears became the largest catalogue retailer featuring everything needed to trim a tree. 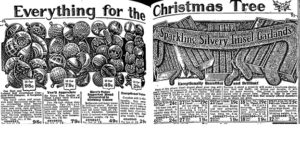 When Larry and Helen moved away from Denver and started families of their own, Margaret’s holidays became more variable. She had options for Christmas celebrations in France, Florida or New York. Some winters Margaret returned to Denver and stayed at the Brown Palace Hotel. Always a shopper she wouldn’t have to walk far to find Sixteenth Street decked out for Christmas.

It was a long way and many years from humble Hannibal, Missouri beginnings. Since she was a child, Margaret loved Christmas so a tree and Catholic mass were likely mainstays to celebrate the season.