The Legacy of a Western Woman: Margaret Brown

During one’s lifetime, the impact we can have on other human beings may seem small, but for our own Margaret Brown that impact was felt around the world and resonates with visitors today.  For over 47 years, the Molly Brown House Museum has shared the story of this incredible woman and 2017 is no different.

The museum is celebrating a huge milestone in Margaret’s life this year-her 150th birthday.  She sits in good company with two other women celebrating their 150th birthday-Marie Curie and Laura Ingalls Wilder.  All three of these women left a legacy on the world they left behind.  Margaret left her own legacy, and this summer, the museum will feature an exhibit honoring this legacy. 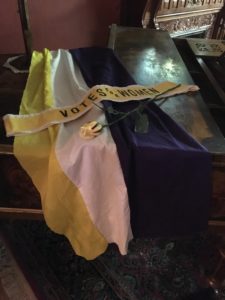 tea.  With the ratification of the nineteenth amendment in 1920, women for the first time were granted the national right to vote.  However, decades prior to this momentous occasion, women fought hard to gain this right including Margaret.  While Colorado gave women the right to vote in 1893, Colorado women could not vote nationally.  Margaret headed east to speak at the Conference of Great Women in Newport, RI, ran for Senate three times under the Women’s Party ticket, and took part in a processional to appeal to President Coolidge

The library allows docents to dive deeper into the injustices Margaret and Judge Ben Lindsey found with the children and how they planned to rectify this.  Margaret, as she does, raised money to help support this cause.  With Margaret’s help, Judge Lindsey was able to fund public playgrounds, nursery for impoverished children, and even a bathtub in the basement of the courthouse for children!   The system they set up would become a model for other cities across the nation.

The second floor of the museum will immerse visitors into the reality of the Brown’s during World War I. Even before the United States entered the war, Margaret headed overseas to France to work with the American Red Cross in 1914.  She would travel to France’s Picardy region to help treat wounded soldiers, brought along medical supplies, and even was a nurse and ambulance driver.  With the music of World War I bellowing through the second floor, the museum shows Margaret preparing for this overseas journey.   After the United States entered into WWI, it was never a question if Lawrence (Larry) Brown, Margaret’s son, would enlist.  He earned the rank of captain and deployed to France in 1918.  His room features a young man ready to enlist to serve his country.  Larry was one of over 4.7 million men and women who served in the various U.S. Forces.

In Margaret’s bedroom along with the Parlor, the museum is proud to showcase several of her dresses on loan from History Colorado.  While Margaret’s legacy in many causes continues to inspire generations, her fashionista side was truly an inspiration to many as well.  The dress in the parlor from 1910 gives visitors a sense of the clothing Margaret might wear as she works with several other women to help support the fight for women’s suffrage.  While she was an activist, she always made sure to stay abreast of the latest styles.  The dress and opera cape in Margaret’s bedroom gives a different side of her then when she was packing to head to France.  The black beaded flapper dress signifies a time when women were released from the constraints of multiple petticoat layers and corsets.  The freedom of this dress resonated throughout the country as women, young and old alike, pushed away the societal norms of the past many years through a stunning piece of fashion.  The opera cape, a few feet from the 1920s flapper dress, shows a woman who was always fashionable when out on social occasions.  This cape, worn with a simple evening dress, would turn heads at any occasion Margaret would attend.

Margaret used her dining room for more than just a place to have dinner with family.  It was her platform for raising money for various causes, including the building of the Cathedral of the Immaculate

Conception, the Cathedral a couple blocks from her home.  With two spires rising into the sky, the Cathedral beaconed some of Denver’s High Society to worship each Sunday including Margaret and her mother.  In order to raise funds for the building, Margaret organized the Carnival of Nations.  The idea came to her after a two week visit in Chicago at the Colombian Exposition of 1893.    She would use this model for her multicultural event here in Denver, the Carnival of Nations.  This is where the museum is getting the inspiration for the large celebration this summer on July 16th: 150 and Fabulous: A Legacy Celebration.  The museum is bringing together over thirty cultural organizations to not only celebrate Margaret Brown’s 150th birthday but to celebrate the amazing community that was built from her spirit.  From 12:00-4:00pm, the celebration will showcase all of cultural partners through mainstage acts, the museum will be open for tours, and Margaret’s Great-Granddaughter Helen Benziger will be visiting with people on the 3rd floor of the museum.  Join us for a block party of Titanic proporations! (Tickets: https://mollybrown.org/visit-us/events/)

In 1932, Margaret was knighted with the French Legion of Honor.  She was recommended by the Maison Bleranourt and by Captain Rostron, the Captain of Titanic’s rescue ship Carpathia.  The philanthropic work that Margaret was recognized for included her fundraising efforts on behalf of Titanic survivors, organizing the Alliance Francaise in Denver, translating the works of Mark Twain into braille and French, and her work during World War I and with CARD after the war.  Just as Nobel Prize winner Marie Curie changed the world through her theory of radioactivity and Laura Ingalls Wilder recorded pioneering life, Margaret’s impact was felt throughout her lifetime. Even today, her legacy provides inspiration to not only staff and volunteers but tens of thousands of visitors and school children who tour her home on Pennsylvania Street each year.