Victorians were curious people interested in nature, the sciences, anatomy, botany, and morbidity. For upper-class citizens, collecting scientific objects showed that they were sophisticated and educated. The Victorians were interested, some even to the point of obsession, in beauty, death, and finding rare items that were visually appealing. Some collections were so extensive that they bordered on hoarding. Suits of armor, human skeletons, and wax figures made up some of the larger items collected. Smaller items were botanical, human, or animal remains displayed in curiosity cabinets or displayed on taxidermy mounts. Collecting was also a social endeavor, conversations centered around the odd, curious, and scientific. Although most collectors were not formally trained, this did not deter collecting and sharing information about the objects. Collecting was not limited to the wealthy; items like buttons, pocket-sized portraits, and animal bones were compiled by the least affluent. 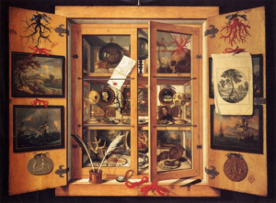 Wealthy individuals often displayed their collections in a curiosity cabinet. These cabinets were a way for the wealthy to show off their hobbies. Curiosity cabinets, also called kunstkammer or wunderkammer, are of German origin. They can be beautiful wooden display cases with elaborate carvings and glass fronts or open shelving style bookcases. Curiosity cabinets were usually kept in places where guests could see them, and conversations about the pieces were the social norm. The primary purpose of collecting was the social, leisure, and recreational aspects of it. Victorians enjoyed discussing and sharing their hobbies while “paying calls” to each other. Paying calls consisted of spending less than an hour visiting over tea or brandy and discussing families, gossip, and curiosity displays.

Oftentimes, the items collected and displayed were botanical in nature. Botany, the study of plants, was popular among scientists and amateurs alike. Explorers would travel the world and bring back specimens from around the globe; these new samples were spliced and shared among academics and hobbyists. Women were also students of botany (for example Marianne North who you can read about here). The field itself was considered feminine, a proper woman’s study. Upper-class girls would attend school and take courses in botany. Girls were supposed to have a more gentle temperament, conducive to growing and handling delicate stems, leaves, and flowers. Large houses would have beautiful atriums filled with exotic plants and insects, specifically butterflies. At the end of their lifecycles, butterflies would be preserved and pinned into glass display boxes, similar to those you can often see in natural history museums today.

Another item that was commonly collected by Victorian Era Americans were various types of photographs (the photographic process was perfected during the early part of the Victorian Era).  The collected photos included daguerreotype portraits, death photos, those of preserved insects, and human oddities such as the skeletal remains of those born with congenital disabilities or horror-based false photography. Horror-based photography included people in costumes or images of magic tricks like floating heads. Members of “freak shows” sold carte de visite, small photograph cards collected, of themselves, as well as displayed them in albums. Joseph Merrick, a professional showman known as the “elephant man,” was a popular carte de visite. Merrick suffered from an unknown illness that caused skeletal deformities that left him with oversized soft tissue. Merrick’s carte de visite was famous because he was a medical anomaly, now diagnosed as Proteus syndrome.

“Freak shows” were part of the Victorian culture, described as family-friendly commercial events; they were the entertainment pinnacle. The performers in the shows were people who were physically different than what was considered the norm. The best performers were often found in Queen Victoria’s court. General Tom Thumb and P.T. Barnum performed tricks and impersonations for her court. Queen Victoria was captivated by the performance and wrote that General Tom Thumb was “the greatest curiosity I, or indeed anybody ever saw.” The “freak show” was a controversial topic for some Victorians, and it still is today. The name itself is offensive, and many Victorians boycotted the shows for its mockery and ableism.

Collecting was a social activity that allowed for shared interests and learning. It was also a way to show off what you knew and to do so in a humble manner. Many curiosity cabinets were eclectic, filled to the brim with unrelated oddities. Today, we study the objects that were collected and learn what was popular and why. Not much has changed in the modern-day; many people still collect oddities, stamps, coins, and even bowties. There are museums and roadside attractions dedicated to the odd and curious. We continue to learn from Victorian society and to study their interests.