A Right To Vote!

For many years, women across this country fought hard for the right to vote.  Women such as Alva Vanderbilt Belmont, Alice Paul, Helen Ring Robinson, Jeannette Rankin  and our very own Margaret Brown became active in this cause.

In 1896 Margaret and J.J. Brown attended the Democratic National Convention in Chicago. During this time Margaret’s political views began to blossom. As her opinions matured, Margaret’s politics began to fall in line with those of the Progressive Movement.  Margaret was an active member of the National American Woman Suffrage Association as early as their days living in Leadville.

Margaret wrote newspaper articles published around the country and gave lectures advocating not only for equal rights for women but equal rights for all. Her lectures consisted of speaking out about human rights, women’s s 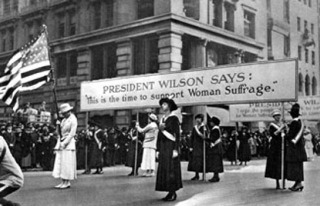 uffrage, Ludlow, the life of Mark Twain, and her travels in Europe and India. By using the media to her advantage, she gained the reputation of being a woman who could “show the iron hand beneath the glove of glistening silk.”

By 1910 Margaret had turned her focus to Newport, Rhode Island. It was here that Margaret befriended Alva Vanderbilt Belmont.  Both Margaret and Alva became involved with the National Woman’s Trade Union League.  This organization fought for a standard minimum wage and 8 hour work days in the workforce.

In early 1914, Margaret was beginning to talk about a third bid for political office. She set her sights on the senate seat held by U.S. Senator Charles Thomas. Margaret was endorsed by the National Women’s Suffrage Association, the Congressional Union and both the Progressive and Democratic parties of Denver, and she had the full support of Judge Ben Lindsay, Alva Belmont, and Alice Paul.

In June of 1914, however, she received a cable that her sister Helen’s husband, Baron Von Reitzenstein of Germany, had been sent to the front lines to lead in the war efforts.  Margaret’s advisors convinced her that this would destroy her chances for victory, so in the fall of 1914 she wired Helen Ring Robinson to say she would not be attending the congressional primaries.

Learn more about Margaret and other extraordinary women in our newest exhibit A Right To Vote! opening October 9th!  The exhibit will run through January 25th.

Join us on November 8th from 5pm-10pm at Night at the Museums where many of these incredible women will come to life.