Throughout 2020, we have been commemorating the centennial of the passage of the 19th Amendment which made it possible for most women to vote. Did you know that this year Colorado women will be celebrating 127 years of voting? On November 7th, Colorado marks the anniversary of the 1893 referendum which gave the women of Colorado the right to vote almost 30 years before a national amendment was passed. Let’s take a look back at how this momentous vote came about: 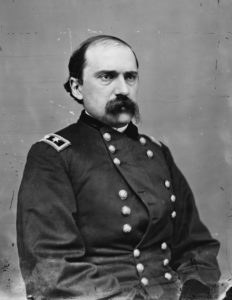 1875 – 1876: A petition to the state’s Constitutional Convention to add equal suffrage in the new State Constitution is rejected.

Members of the convention feared that adding women’s suffrage to the state constitution was too radical for the federal government to approve. As a compromise, women were granted the right to vote in school elections.

At the Convention, Henry P.H. Bromwell, a judge and Republican representing Denver and Agapito Vigil, a Spanish-speaking rancher and Democrat from southern Huerfano and Las Animas counties, supported suffrage and set forth their case for the enfranchisement of women in a minority report:

“This capacity of Woman to govern has been shown. There is hardly a kingdom or empire…which does not point to a reign when the sceptre was held by a woman, as the most illustrious period of its history, either in war or in peace. It stands undisputed, and today it is found throughout the land, that the best governors in the school-room are these natural governors of our infancy and youth, women.

The truth is, we are a human race. Part of us are men, part of us are women; both equal, each superior, and each inferior; each is part and parcel of the same humanity.”

1877: A referendum for equal suffrage is put forth to a vote by the men of Colorado. Susan B. Anthony and other suffrage leaders campaign for equal suffrage ahead of the referendum on the issue of the enfranchisement of women. The referendum is defeated by a two-to-one margin. 6,612 votes for and 14,053 votes against. Some voters, particularly saloonkeepers and businessmen, feared that women voters would support temperance, the ban of the sale of alcohol, which was a popular political issue among women at the time.

January 14, 1893: House Bill 118 is introduced into the Colorado State House of Representatives by Representative J. T. Heath of Montrose and Delta counties. The bill was entitled “A bill for an act to extend the suffrage to women of lawful age, and otherwise qualified, according to the provisions of article seven, section two of the Constitution of Colorado.”

March and April 1893: The bill is passed by the state House and Senate and is added to the November election ballot.

March 1893-November 1893: The Non-Partisan Equal Suffrage Association of Colorado campaigns to convince male voters of the state to vote in favor of women’s suffrage.

Leaders of the Association include reporters Ellis Meredith and Minnie J. Reynolds, teacher Martha Pease, physician Mary B Bates, African American club leader Elizabeth Piper Ensley and American Woman Suffrage Association leader Louise Tyler. Ellis Meredith appealed to the national suffrage leaders, Susan B. Anthony and Lucy Stone, for assistance campaigning in Colorado, arguing: “If Colorado goes for woman suffrage, you may count on a landslide in that direction throughout the West.” 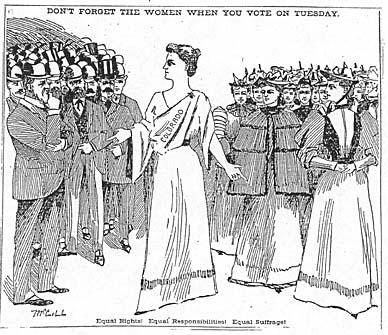 Woman suffrage advocates take a three-prong approach to communicating their message to the men of Colorado. They conducted lectures and speeches throughout Colorado, distributed leaflets and used newspaper columns and advertisements to gain support for their campaign. 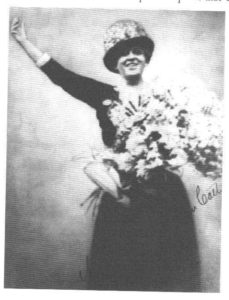 After one of her early speeches,  the Rocky Road Enterprise reports on September 7th:   “Mrs. Chapman is very able, eloquent and magnetic and made a splendid plea for simple justice to one half of the citizens of the state.”

Support for the referendum is much more evident than in 1877. On September 13, The Silver Cliff Rustler quoted the Denver Republican saying:

“There is a division of sentiment concerning the wisdom and the need of an extension of the elective franchise to women, but it is evident that the equal suffrage cause is much stronger now than it was a few years ago. After all the arguments that may be advanced against giving women the right to vote are presented the plea of justice will remain unanswered. This is the alpha and the omega of the whole matter. It is unjust to deny women an equal voice with men in the affairs of government. What they would do with the right to vote if they had it is not the business of any man.”

Success of the vote has been attributed to the rise of the Populist party, which supported equal suffrage, the feeling of discontent with the economic and political conditions in the state and the backing of labor organizations. As The Rocky Mountain News reported, this statement was frequently heard before the woman suffrage ballot: “Let the women vote. They can’t do any worse than the men have.”